Following this fall, the future of the Mountain Pacific Sports Federation (MPSF) as a men’s soccer conference is in doubt.

The two heavyweights, CSU Bakersfield and New Mexico, are set to leave for greener pastures. Others are also scheduled to make their way out of the MPSF after this year, and finding new teams to fill the open spots will be tough.

This fall though, there are a number of reasons why the MPSF will be one of the best conferences in college soccer to follow on a weekly basis. CSU Bakersfield returns Gyasi Zardes for his anticipated last collegiate season before joining the professional ranks.

Zardes scored 18 goals in 20 games last season, and is easily capable of topping that mark this fall.

Despite the Roadrunners’ star power, MPSF coaches still do not believe CSU Bakersfield can top New Mexico in the league. The Lobos collected five of the eight first place votes in the conference preseason poll.

The Lobos return nine of the 11 starters from last year’s team that went undefeated. That little turnover will not change much from New Mexico’s approach this fall, but there are a few freshmen on the roster that could push from playing time early in the season.

That start of the season loss will be difficult because New Mexico begins the year with three of its toughest games: at UCLA, at Tulsa, and vs. SMU. 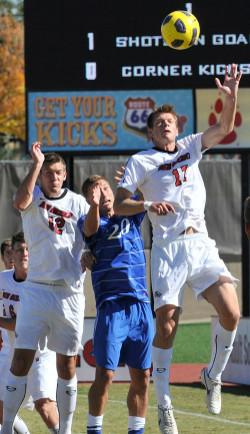 Center back Kyle Venter is the cream of the crop on this team. The defender is as reliable as they come and did exceptionally well during his sophomore campaign in 2011.

The Roadrunners are a team with so much promise, but yet to really reach that ceiling.

Zardes is the most dynamic player in college soccer when he is on his game. Jesus “Chuy” Sanchez is as good as most attacking midfielders in the nation. And Kory Kindle should be the discussion for best outside back amongst seniors when the draft comes around.

The depth was exposed a bit last year when the offense struggled to break down stout defenses in New Mexico, Air Force, and St. Mary’s(m). Head coach Simon Tobin added youth national teamer Christian Duarte (Texans SC Houston) to the fold in an effort to reinforce the bench and midfield.

Sophomore midfielder Lucas Dall’Orso has really emerged as a consistent threat on set pieces during the spring and preseason.

The Falcons return nine of their starters from last year’s team that was one of the big surprises of the season. Multiple MPSF coaches cited Air Force as the team to watch in the conference for this season.

With a group that plays as one and makes it incredibly difficult for the opponent to score, there is reason to believe the Falcons could be in the hunt for an NCAA tournament bid.

However, their out-of-conference schedule is weak, which will make things difficult in securing an at-large selection.

Midfielder Kevin Durr was an All-MPSF First Team selection in 2011. The former Bayern Munich youth team player has started nearly every game over the past three seasons with the Falcons.

The Pioneers struggled last fall for a myriad of reasons – none of which was complimentary – but there is reason to believe this is a program that could make the MPSF a four-team race for the title.

Incoming freshman Malcolm Harris was a great pick up for the program. The Baltimore Bays Chelsea product has youth national team experience and should be able to slot into some starting spot on the field.

Steven Sanchez is back for his senior campaign after making the most of his first season as a starter last fall. The captain led the team in scoring with seven goals and five assists.

MPSF freshman of the year Salvador Bernal knocked in six goals and two assists in his debut campaign. The local product will need to keep that torrid scoring pace up if he hopes to lead the Rebels into the race in the MPSF.

Peter Fewing is back in charge of Seattle after seven years away from the position. He inherits a roster that has potential, but might need a few years before it is back into the conversation as a potential NCAA tournament squad.

Freshman Austin Sweeney (Seattle Sounders Academy) is in line to start from the first game. The midfielder could be a difference maker at the collegiate level with his ball striking ability on long-range shots.

Although the preseason is meaningless, the Huskies’ 1-1 draw with SMU should draw some attention from coaches in the MPSF. HBU, which is new to the conference this year, struggled last season, but the program continues to improve with every year and could make a game out of it with a few of the heavy hitters in the conference.

Junior Kristopher Tyrpak is one to watch. The tall forward has been a solid contributor for the past two seasons.