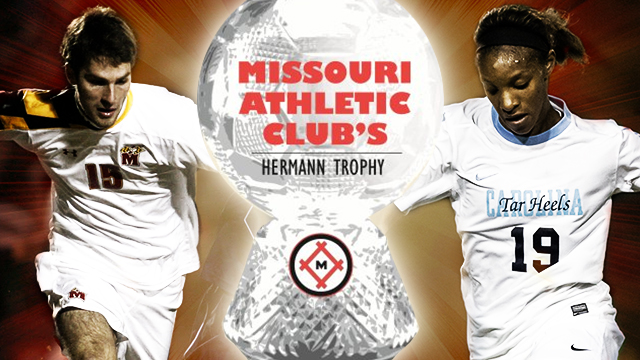 Junior midfielder Crystal Dunn from the University of North Carolina and junior forward Patrick Mullins from the University of Maryland are the winners of the 2012 Missouri Athletic Club’s Hermann Trophy, presented to the best female and male players in NCAA Division I soccer. The winners were decided by a vote of NCAA Division I soccer coaches whose programs are current members of the National Soccer Coaches Association of America (NSCAA), along with a fan vote that cumulatively counted as the equivalent of one coach’s vote. 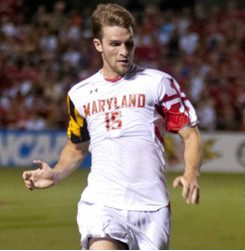 Dunn was a key member of the 2012 U.S. National Team that captured the U20 World Cup in Japan in September. As a result, she missed the non-conference portion of the Tar Heels’ schedule, but once she joined the lineup, her experience and versatility made an immediate impact. Dunn started at center back for the first 11 games before being moved to the center midfield for UNC’s six-game NCAA Tournament run.

She played a key role in helping Carolina capture their 21st national championship in school history. Dunn assisted on goals in both College Cup games. The three-year starter earned NSCAA First Team All-America honors and was named the ACC Defensive Player of the Year.

Mullins (New Orleans) led Maryland’s high-scoring attack with 17 goals and 10 assists.  He tallied seven game-winners to lead Maryland to the best winning percentage in the country (20-1-3).  The Terrapins made it all the way to the College Cup semifinal where they lost on penalty kicks

An NSCAA First Team All-American, Mullins’ 2012 season ranks sixth in points and goals, and eighth in assists in Maryland program single-season history. The forward was named ACC Offensive Player of the Year and tabbed Most Valuable Player at the ACC Championship after leading the Terps to their third ACC tournament crown since 2008. He also helped Maryland capture the ACC regular season crown for the first time since 2005. Mullins is the second player in Maryland history to win the MAC Hermann Trophy. Jason Garey received the crystal soccer ball trophy in 2005.

The Missouri Athletic Club has been presenting college soccer’s players of the year awards since 1986. The MAC was established in 1903 as an athletic, dining and social club. It has a “Platinum Club of America” status, which is awarded to the top 3 percent of private clubs in the country.