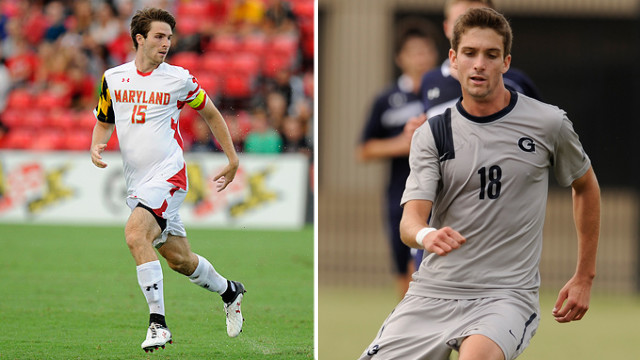 Both forwards, upon the completion of their sensational junior seasons, had professional opportunities to consider, the chance to bypass their 2013 collegiate campaigns to jump-start a pro soccer career. But after consulting coaches and families, the two strikers came to the same conclusion: finishing school. 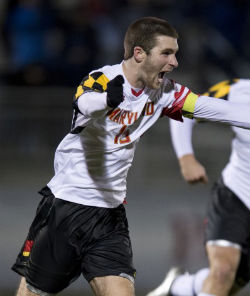 “I was so close and I wanted to wrap up my double major while I was still here in school, that meant a lot to me,” Mullins told reporters in a conference call. “Obviously it was tough because my dream has always been to be a professional soccer player and I definitely haven’t given up on that yet, but I also thought it was important for me to finish out school."

Said Neumann: “There were definitely a lot of talks between me and my parents and my coaches if that opportunity presented itself if I was going to leave or stay and it was always a pretty clear decision for me to get my degree at Georgetown. That’s always something that was very important to my parents and my family that I took advantage of the great education at Georgetown."

Simply from a statistical perspective, it wouldn’t have been a shock for either to make the jump to MLS. Mullins, winner of the Hermann Trophy, finished the season with 17 goals and 10 assists. The postseason accolades rolled in, along with the Hermann Trophy – First Team All-American, ACC Offensive Player of the Year, just about every major award there was to win, Mullins nabbed it.

Neumann wasn’t too far behind, the Pennsylvania native scoring 10 and adding 13 helpers in his 2012 campaign. He made quite the impression against the Terps in the semifinal, scoring a hat trick and converting his penalty kick as the Hoyas advanced to the title game, where it lost 1-0 to Indiana. A playmaking forward, Neumann is a cerebral player who displays creative tendencies with the ball at his feet and is also a reliable finisher.

Their return in 2013 is yet another reason to track both teams looking to leave a mark on the national stage. The trajectories of the two programs, while historically vastly different, are following a much closer trend ahead of the 2013 campaign. Both Maryland and Georgetown enter the season ranked in the top five in every single major preseason poll. And while it may be familiar territory for the Terps, the Hoyas already got an idea during a pair of preseason matchups what it’s going to be like as favorites.

“We know that we’re going to have a target on our back because of our success last year and we know it’s going to take even more effort and dedication to achieve the goals that we set this year because we know everyone is going to be gunning for us,” Neumann said.

And while Maryland usually carries that kind of target, head coach Sasho Cirovski thinks Mullins will get even more special attention throughout the season, something that is surely going to test him.

“What he’s got to get used to now probably a little bit is being the target and double-teamed a lot more, especially earlier in the season,” Cirovski said. “That’s something as a team we’ll have to figure out. Obviously he had a big name last year, he’s got a bigger name this year. We’ve already seen it in preseason, there’s a lot of special attention paid to Patrick.

“Biggest thing with Patrick now is to make sure he doesn’t worry just about leading everybody so much that he forgets about executing his role to the best of his ability. I think that’s what happens when you become a senior sometimes, you start worrying about everybody else so much, and take on that responsibility you sometimes forget the difficulties of your position.”

Mullins is aware he won’t have to do it alone, as seniors Jake Pace and Sunny Jane are also there to help lead the team.

“It’s not just one guy leading the whole charge or anything like that, we’ve got a great group on this team this year,” Mullins said. “I don’t feel any pressure or any weight on my shoulder as far as leading the team because we have a good five or six seniors coming up in this class that can do just as good of a job as I can.” 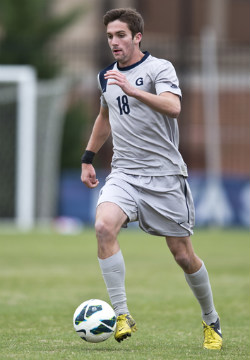 The leadership element also applies to Neumann. While he was a co-captain of last year’s team, he followed the lead of the now graduated standouts of last year – Andy Riemer, Ian Christianson, Tommy Muller and Jimmy Nealis. The tone that those four set for the squad last season translated to the team’s success, and one of the challenges Neumann sees is how to rise up and recreate that kind of environment with a new group and identity.

“They were definitely more serious than any other Georgetown seniors we’ve had since I’ve been here at least, and I think that had a lot to do with them wanting to be pros, and them wanting a professional environment at practice,” Neumann said. “They really wanted their senior year to be quality, and that’s something me and [co-captain] Joey [Dhillon] have talked about a lot, because there are more players on the team now that have aspirations of being pros and maintaining high levels of training that maybe Georgetown four years ago, more people were thinking about school, about jobs after school and everything like that. But now we’re very focused on our program and trying to become a national powerhouse, that was something that was very important with our seniors and you see the success we had, a lot of that attributes to them.”

From the eyes of Hoya head coach Brian Wiese, that challenge is a development opportunity that Neumann might not get elsewhere.

“Even though he was captain last year, he’s had a completely different experience in terms of how he gets the best out of his teammates,” Wiese said. “How he responds to his teammates, how he responds to adversity is huge growth for him. He’s maturing, and he’s able to do it as a senior member of a team instead of as a rookie finding his place at the next level. And that’ll come too, but I think this experience is invaluable.”

Coincidentally enough, both players kick off the season with a very difficult road trip to California. Maryland meets Stanford on Friday night while Georgetown matches up against California, then the two sides flip-flop opponents for Sunday.

With the season around the corner, and the choice made last fall behind them, there are no second thoughts from either Neumann or Mullins. Both are laser focused on one last college campaign.

“No regrets at all with my decision,” Mullins said. “I just look at it that each day I want to get better no matter what environment I’m in. Right now I’m in a very good environment and I’m excited to get games going again, and the season to get going.”