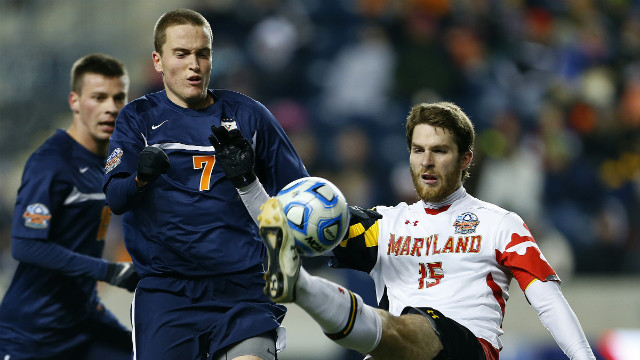 CHESTER, Pa. — As his collegiate career comes to a close, Patrick Mullins continues to add to his legacy as one of DI soccer’s all-time greats.

The Maryland star emphatically delivered on the biggest stage Friday night, scoring two high-quality goals to help power the Terps to a 2-1 win over Virginia in the national semifinals. 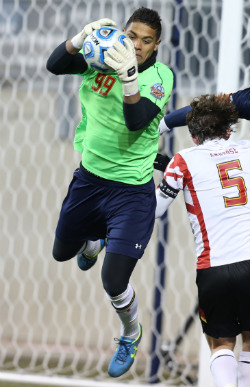 Mullins’ goals wouldn’t have stood up if not for a sensational lunging stop from freshman goalkeeper Zackary Steffen in the 88th minute, denying UVA midfielder Brian James the equalizer with the game still in the balance.

"We’ve seen it from Zack throughout the year," Cirovski said. "There are very few goalkeepers in the country that can do the things he can do."

The game with a frenetic finish came to life early on with Mullins' sparkling volley that gave Maryland the lead in the 11th minute. After a turnover in midfield, Terps midfielder Mikias Eticha chipped a long ball between Virginia’s center backs in the direction of a sprinting Mullins. The Hermann finalist read the play perfectly, getting behind center back Kevin McBride, and flicked a one-time curling volley over goalkeeper Calle Brown with the outside of his left foot into the back of the net.

Shutting down Mullins was obviously a key for the Cavaliers heading into the game, but it was a game plan that didn’t pan out.

Trailing 1-0, the best opportunity of the first half for Virginia came off the foot of Jordan Allen. The pacey midfielder beat his defender and created enough space to lash a drive that goalkeeper Zackary Steffen punched away.

Shortly after the halftime break, each side had good looks at goal. Mullins once against slipped in behind the UVA back line, poking just over Brown’s frame with his left foot.

At the other end, Virginia forward Darius Madison struck the post a minute later. After a nice combination, Madison’s low shot deflected off of Steffen's hand, slipped through, but found the woodwork.

The Cavaliers looked the slightly more dangerous side as the second half progressed, going forward in spurts through Allen, Madison and Marcus Salandy-Defour. Gelnovatch thought it was one of the team’s top performances of the year – especially against the Terps.

“We’ve played that team three times, that’s probably the best we’ve played against them,” he said. “We were having the ball, feeling good about ourselves in possession and in particular in the second half getting at them a little bit more.”

But as they pressed forward, Virginia left themselves vulnerable at the back. And Mullins came through again in the 76th minute. Midfielder Tsubasa Endoh lofted a high ball that fooled the Cavalier center backs, and Mullins ghosted in behind the defense and lashed home his second.

On both occasions, Mullins simply looked to turn great balls into goals.

“As a forward, all you can do is make hard runs and hope the ball gets there," he said. "When you have great players feeding you the ball, more times than not, they’re going to get there. I got two great services, and I made sure to put them away.”

Just as it seemed like that goal would seal Maryland’s win, UVA pulled one back a minute later. Salandy-Defour played a give-and-go with Brian James at the top of the box, and Dan Metzger scythed down the forward in the box. Todd Wharton stepped to the spot and sent Steffen the other way to make it a 2-1 game.

Trailing a goal, the Cavaliers threw numbers forward, and came within Steffen’s save of tying the game, a lunging stop of James' goal-bound shot.

“I was already up off my chair,” Gelnovatch said. “I thought it was an outstanding save, on an icy surface, very, very well taken by Brian James, he picked out his corner and side-footed it, I don’t know where Zack came from to make that save.”

That moment turn out to be the last clear chance for the Cavaliers as the Terps defense saw out one final corner kick with seconds left to advance.

“We’re delighted that we have a chance to play Sunday against a great Notre Dame team,” Cirovski said.