All four quarterfinal matchups are compelling in their own right, but the meeting of Indiana and North Carolina at this stage is perhaps the game of the round. There’s the recent success of the Tar Heels – defending national champions, looking for a fifth straight berth in the College Cup – juxtaposed against the historical success of the seven-time national champion Hoosiers, which hasn’t appeared in the national semifinals since 2004.

Then there’s also the fact that these two teams met in last year’s tournament, with Carolina winning thanks to a golden goal tally by Billy Schuler in overtime. 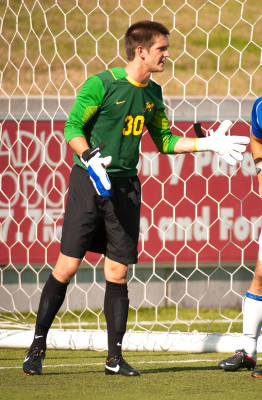 It’s also a contrast of on field styles, as North Carolina is a team that likes to keep the ball and defends extremely well, while struggles to score at times – through 200+ minutes in the tournament, the Tar Heels have just one goal. Meanwhile, the Hoosiers have scored six and boast Eriq Zavaleta, one of the best forwards in the nation.

The lone West Coast team left in the NCAA Tournament, San Diego faces a long cross country flight in advance of trying to knock off a seeded team for the third straight game and claim a shocking spot in the College Cup.

It will take a fourth straight win on the road to accomplish that, but the Toreros have shown the ability to spring upsets in previous games. Connor Brandt is the main threat off the bench, coming up huge in these tournament games.

The Hoyas meanwhile, have survived a pair of close calls to this point, defeating Charlotte 1-0 before advancing past Syracuse on penalty kicks in the third round. Perhaps the biggest issue for the Hoyas is the health of senior center back Tommy Muller. An All Big East selection, Muller missed Sunday’s game against Syracuse, and will be a game time decision for this crucial matchup.

Another rematch of a 2011 NCAA Tournament game, Louisville dumped out Maryland that day last year thanks to a 4-2 win at Ludwig Field, upsetting the Terps on their own turf in College Park.

Earlier this year, Maryland returned the favor by knocking off the Cardinals 3-0, though it the final score certainly flattered the Terps. So both sides will have revenge on their mind heading into Saturday’s game, as Maryland seeks a return to the College Cup for the first time since winning the title in 2008.

They’ll look to oust the Cards with the same offensive ferocity that has carried them to this point. Of the 21 Maryland outfield players, 16 have found the back of the net, with no one scoring bigger goals than junior Patrick Mullins. The goals will come for Maryland in this one, the No. 1 attacking team in the country – the question will be whether or not they can keep Louisville’s offense at bay. The Terps have certainly been vulnerable at the back of late, their last shutout coming in a 1-0 overtime win against Carolina on October 19.

Head coach Ken Lolla will know what his side needs to do to spring the upset again – the question will be whether or not they go out there and stifle Maryland’s attack long enough to make it a reality.

Winning close games has been a habit for the Huskies so far this season, and they’ve secured one-goal wins in both games of the tournament to get them to this meeting against the surprising Blue Jays.

The formula has been simply for the Huskies. Strong goalkeeper from Andre Blake, crisp passing from Carlos Alvarez, and enough goals from somewhere on the field (usually Mamadou Diouf) has done the trick in 2012.

Emulating that against what was supposed to be a rebuilding Creighton side is all that stands between UConn and a College Cup spot. The Bluejays survived a third round meeting against Akron thanks to the goalkeeping heroics of Jeff Gal, and are certainly capable of pushing the Huskies to the limit up in Storrs.