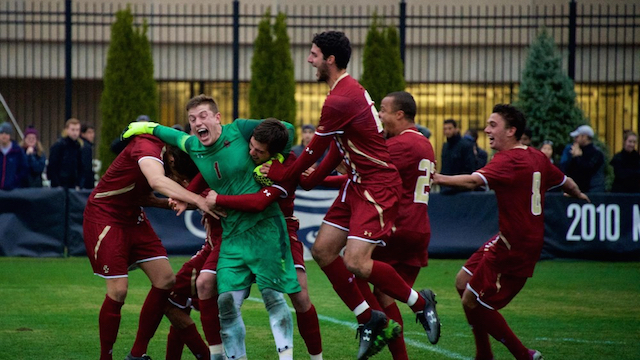 There are seven games left in the 2015 NCAA Division I season. The majority of the games kick off this week as the four quarterfinal games kick off on Saturday. Which four teams will advance to College Cup?

How They Got Here: Wake Forest defeated No. 16 Indiana 1-0 on a late goal from Ricky Greensfelder in the Third Round. It was the second 1-0 win of the NCAA Tournament for Deacons. Stanford defeated No. 9 Ohio State in the Third Round thanks to a pair of goals from Jordan Morris. The Cardinal also won its Second Round game 3-1 against Santa Clara. Players to Watch: From the average fan’s perspective, the focus of this game will be on Jordan Morris. The U.S. Men’s National Team forward is the most popular player in college soccer and he has lived up to the billing recently. Morris’ play in the Third Round was a major reason why the Cardinal are in this spot. Fellow forward Eric Verso did a lot of work off the ball to help open up the game for Morris. He also supplied a scrumptious service for Morris’ first goal of the night. Verso is a bit of a joker in this affair. If Wake Forest is too involved in Morris, Verso will end the Deacons’ shutout streak. For Wake Forest to advance to College Cup, midfielder Jacori Hayes and Ian Harkes need to continue to play at a high level. Hayes could have chances in this game from his runs forward through the midfield. Wake Forest goalkeeper Alec Farrell will also need another strong showing in goal for Wake Forest.

Beyond the obvious battle between the best forward in college soccer and a tested defense, this is going to be a fascinating tactical battle. Stanford has not gone against a team as sound in possession as Wake Forest. Stanford head coach Jeremy Gunn and his staff need to plan a strategy around opening up the game on the counter. Corey Baird may end up as the player of the game. The former RSL AZ/Grande Academy winger offers a unique skill set on the counter with his pace and technique in dribbling past defenders. Baird’s decision-making has improved exponentially since arriving in Palo Alto. He is among the best wingers in the college soccer. San Jose Earthquakes playmaker Amir Bashti is another option for the Cardinal in the attack. Bashti, typically, comes off the bench. His vision and passing gives the Cardinal a different look when he steps on the field. If the defender steps off Bashti, he will test the goalkeeper. If the defender is too close, Bashti will get past him. It’s a tricky situation for a defender who will likely be tired by the time Bashti steps on the field.

Wake Forest’s counter to this onslaught from the Cardinal is a team effort. Head coach Bobby Muuss, who is in his first season leading the program, spoke about how the team had to compete together in the previous round for the Deacons to reach this stage. It’s going to take another performance at that level for Wake Forest to advance to College Cup. As long as Wake Forest keeps good balance and makes Stanford chase the game, the Deacons will keep the shutout streak alive. It will take a nearly perfect effort from the squad to achieve that goal.

Series History: Stanford leads the all-time series 2-0. The last meeting was in 1995.

Prediction: The longer this game stays scoreless, the better for Wake Forest. The key will be for the ACC squad to keep Morris and his teammates frustrated through the first 60 minutes. If Stanford manages to punish Wake Forest on the break early, the home side might not have the fire power to punch its way back into this game. Stanford wins 3-1.

How They Got Here: Akron kept the good times rolling in the Third Round with a 2-1 win over SMU. The Zips set an NCAA Tournament record for corner kicks in the game, as the home team kept the ball in SMU’s half for the majority of the contest. Creighton went on the road and knocked off No. 5 North Carolina 1-0 thanks to a goal from Timo Pitter.

Players to Watch: The frustrating part for teams playing against Creighton is the lack of chances in the game. The Akron forwards will not get as much service as they have in previous rounds and the looks on goal may only come sporadically. It’s going to be a big adjustment for Akron after dominating the previous two rounds so easily. The best weapon for Akron in this game is the best one they’ve had all season: Richie Laryea. The former Sigma FC player can be utilized in the space between the Creighton defense and midfield. Picking him out with room to turn will allow the Zips to create chances with a player on the dribble while looking forward toward goal. With Laryea on the move, there are a number of options for how Akron can break down the Jays defense. Near the top of the list is New York Red Bulls prospect Adam Najem who can punish teams with his quality in set piece situations. New Zealander Stuart Holthusen has also been in good form in front of goal recently.

Creighton’s strength comes from the sideline. Head coach Elmar Bolowich is a wizard. He is incredible in preparing his team to win games in the NCAA Tournament. His game plan against North Carolina worked to perfection and he likely will have his group geared up for this contest as well. Bolowich enjoyed the return of Vincent Keller to the lineup in the previous round. With his steady play at defense, the Jays have that dependable option in front of Connor Sparrow once again. In the attack, Fabian Herbers continues to be the tank that was built to destroy the postseason dreams of the competition. The Player of the Year favorite is more physical than most defenders are used to, which can create matchup dilemmas for the defense especially when he is charging down the center of the field with the ball at his feet. Creighton needs the play to flow through Herbers in order to enjoy success against the Zips.

Series History: Akron leads the all-time series 1-0-2. The two programs have played to a draw in the last two meetings.

Prediction: Akron’s dynamic attack has been a joy to watch through the NCAA Tournament. However, this contest seems like it might be a too complicated puzzle for the young squad. Creighton might only get one chance, but the Jays will put it away. Creighton wins 4-3 in PKs.

How They Got Here: Syracuse defeated No. 11 Seattle in the Third Round. The ACC Tournament Champions beat Dartmouth 2-1 in the Second Round. Boston is the lone unseeded team remaining in the competition. The Golden Eagles defeated Vermont in the First Round before knocking off No. 14 South Florida in the Second Round. Boston College beat No. 3 Georgetown in penalty kicks in the Third Round.

Players to Watch: Syracuse midfielder Liam Callahan earned a spot on the Team of the Week thanks to his service from set pieces. Callahan delivered the ball on the opening goal against Seattle. He was involved in the play throughout the game, but his main exploits came after the whistle when he had time to put the ball on a teammates head in front of goal. Callahan had an assist in the first meeting this season between these teams.

Boston College’s strength throughout this run to the Sweet Sixteen has been in limiting chances on goal and allowing the potent attack to operate in close contests. If Boston College is going to keep that upset streak rolling, the defense will need to keep Syracuse from getting close to goal or allow set pieces in the attacking third. The Golden Eagles shut down Syracuse’s attack in the first half of the first game this season. Cuse only managed one shot in that 45 minutes.

Prediction: Boston College is a great story of the postseason and the run to the Elite Eight has been sweet. However, this is a massive hurdle for the squad at this stage. Syracuse is extremely well organized and riding a hot streak since the start of ACC Tournament play. Syracuse wins 2-1.

Players to Watch: Clemson’s success has been a result of a revolving door of players stepping up to the forefront and taking advantage of opportunities. The Tigers’ playing style has been magnificent at showcasing the attributes of the talented players on the squad. In the previous round, it was senior Kyle Murphy, a former walk-on, who scored the game-winner. In this round, it will be a similar story. If the Tigers are to advance, it will be one of those talented players on the roster who rises to the occasion and puts his name in the headlines. Forward Diego Campos had some good moments in the Third Round game. Campos has the skill and quality on the ball to trouble the Maryland defense.

For the visiting side, it feels like another year when Maryland is hot at the right part of the season. Maryland used a goal for freshman Eryk Williamson to carry the team past a quality Notre Dame side last week. Midfielder Mael Corboz dropped a pair of assists in that game. Corboz is one of the players that Clemson needs to keep an eye on throughout this game. The brilliant playmaker has a knack for showing up when the defense takes a brief nap. Maryland’s most important player in this game will be goalkeeper Dakota Niedermeier. He was world class for the Terps during the Big Ten Tournament and the qualities are there for him to pull off another miracle between the sticks.

Prediction: Clemson’s defense showed some vulnerability in the previous round against the Gauchos. The off the ball defense was not as sharp as it could have been and UCSB did a good job making runs into the box between the center backs. Maryland is not quite as dynamic in the attack, but the Terps are better defensively. Maryland needs to keep this as a low scoring contest to pull off the upset. Clemson wins 3-1.