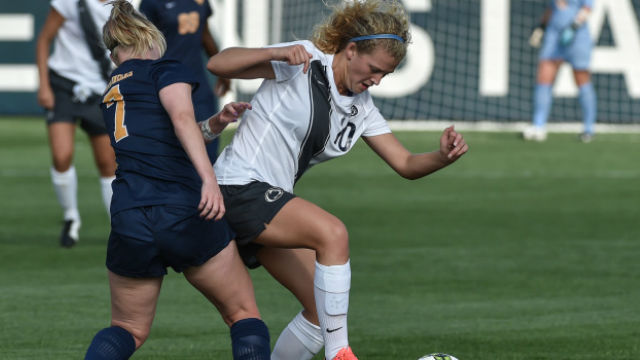 So begins the second round of action in the NCAA tournament, as teams are hoping to pack in two games over the course of the weekend in various corners of the country.

It’s something of a home game for UCF, which travels a much shorter distance than the Badgers ahead of this Friday encounter. It should be one of many good matchups this weekend between two teams that have a slew of talented seniors: the Knights boast Tatiana Coleman up front and Carleigh Williams who anchors the back line. Wisconsin’s lineup, with Genevieve Richard in tremendous form in goal, will turn to Cara Walls up front and Kinley McNicoll and Rose Lavelle looking to boss the midfield. 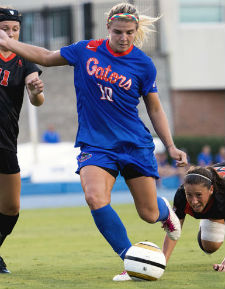 Can the CAA side pull off the surprise of the round? The Huskies have to be brimming with confidence after another solid season and will look to pull off the unthinkable on the road. FSU will be by far the best team Northeastern has seen this season, with a loss to Boston College its only matchup against an ACC opponent so far in 2014. Its strength lies in its defense, conceding just six goals this year, and defender Mackenzie Dowd will be amongst those looking to shut down a quality Seminole attack.

Keeping tabs of midfield maestro Dagny Brynjarsdottir is key to slowing down FSU, though the Seminoles have plenty of other weapons to hurt you. Jamie Fields and Carson Pickett and create from the flanks, while Berglind Thorvalsdottir and Cheyna Williams can do the damage in front of goal.

Perhaps the biggest upset of the first round came with Seattle’s overtime upset of Washington State, as the WAC side managed to knock out its Pac-12 opposition. Stephanie Verdoia has eye-popping stats, with 22 goals and 13 assists this year. She’s also taken 112 shots as well, easily more than double than the next closest teammate.

Slowing Verdoia is the focus for the Gamecock back line, which is anchored by Taylor Leach and Sabrina D’Angelo in goal. South Carolina has to be heavy favorites in this one, but if Verdoia gets on track, an upset isn’t impossible.

The first of what should be many ACC vs. Pac-12 clashes, Colorado’s riding a four-game winning streak into Chapel Hill with the aim of securing a historic win against the Tar Heels. Brie Hooks has been heavily involved in that run, with a goal or assists in the last four games. The sophomore forward will have her hands full looing to crack a stout UNC defense.

Every NCAA game for UNC will feature the same question: who will score? They have plenty of players who can answer that, with Amber Munerlyn and Paige Nielsen supplying the goals in a straightforward first round win against South Dakota State. With 16 goals conceded in 21 games, the Buggaloes have a solid defense that has seen just one goal scored against them in the last five games. They’ll look to keep it tight and hit on the counter.

Rachel Tejada takes her scoring act on the road with another upset in mind for the Redbirds. Outscoring their opponents has been the template for success, as Tejada and Hannah Leinert lead an attack that scores 2.76 goals per game.

Pepperdine, with Lynn Williams up front, survived a first round scare against USC, as the Waves advanced on penalties. Should it come to a high-scoring affair, they do have enough pop up front to keep up with the vaunted Redbirds, but it should be a closer game than one might think.

Next up against the vaunted Bruin juggernaut: the Crimson fly west, hoping to keep up. The Crimson did well to win their first round matchup that was kind to say the least, blowing out Central Connecticut State 6-0. Dani Stollar and Margaret Purce are the offensive duo with the best hopes of finding a way to score against UCLA, something that isn’t easy. Purce’s matchup against the central defensive pair of Abby Dahlkemper and Megan Oyster in particular is a focus here.

Conceding just four goals all season, including eight straight shutouts. Goals can come from anywhere it seems like, whether Dahlkemper on set pieces, Taylor Smith with her pace in behind, or Sam Mewis’s marauding runs from the midfield into the box.

Both these teams travel to Virginia after slight wobbles in the first round, the Sun Devils winning 4-2 but conceding twice against Big Sky foes Northern Arizona must be of slight concern. The Wildcats secured progression through penalty kicks against SIUE on the back of a scoreless draw.

After failing to score twice in two games (albeit the first against Texas A&M) Kentucky enters this one searching for offense. Arin Gilliland might see some time up front should the team struggle, though the success with her in defense certainly might negate that possibility. Forward Aly Moon has been the main threat for the Sun Devils this season, and she’ll look to continue that run.

After routing High Point in the first round, Virginia sets up shop for two possible home games at Klockner stadium, where it remains a difficult side to beat. Morgan Brian showed what she could do with a one goal, five assist performance in that win. Slowing her down is obviously the main key for the Scarlet Knights, but it’s more than just Brian, as Makenzy Doniak, Danielle Colaprico and Brittany Ratcliffe can all do damage.

Freshman goalkeeper Casey Murphy can expect to be busy in this one, and she’ll look to keep things close while Stefanie Scholz and Madison tiernan look for holes in the Virginia defense.

These two teams met in Blacksburg back on September 5, and the result was a Hokie blowout, shellacking Georgetown to the tune of a 6-1 score. It’s going to take a monumental effort from a Hokie defense that could be starting two freshman center backs again with Drew Topor and Elizabeth Wenger, who both helped shutout West Virginia last weekend.

Stopping a strong Hokie attack is going to be a tough ask, as Murielle Tiernan is a force up front. If Georgetown keeps it closer this time around, Daphne and Rachel Corboz can team up and look for the upset.

This one has the potential to be a high-scoring affair, as Connecticut’s attack, led by Rachel Hill, will look to hang against the host Nittany Lions, who have seen 13 different players find the back of the net.

Penn State, a team with plenty of College Cup potential, stacks the attack with Raquel Rodriguez looking to lead the deep run after a strong opening round performance against Buffalo. The key here will be whether or not UConn can keep the Nittany Lions off the board, and if they can’t, if Hill is able to help them keep pace with them.

The Longhorns don’t have to leave the state of Texas for its second round matchup, but it’s far from an easy meeting against the Irish. Goalkeeper Abby Smith could end up key here, as she’s capable of keeping scores close while the Longhorns aim for the sucker punch.

Notre Dame enters this after a last-gasp winner secured a 1-0 win over Valparaiso, and head coach Theresa Romagnolo is certain to have the attack ready to hit the ground running. The Irish have a bevy of talent with Morgan Andrews, Cari Roccaro, Katie Naughton, but as seen in the first round, needs that punch up front to progress.

Friday’s encounter between these two teams is the second time the sides tussle in 2014, albeit with the Aggies as hosts this time. That one ended in a 2-2 draw back on September 5, and Texas A&M is riding high since, unbeaten since October 3, a span of 11 games. Shea Groom, Kelley Monogue and the rest of the Aggie attack are going to be at the ready to erase past failures in the NCAA tournament.

Arizona isn’t riding quite as high overall, with just one win in its last seven regular season games, though that’s irrelevant now after progressing on the road against Oklahoma State. Aleandra Doller provided the heroics last week with the game-winning goal, though freshman Gabi Stoian is the team’s leading scorer with 13 on the year. If this one becomes a high-scoring affair, it’s hard to know if Arizona can keep up with the Aggies.

Progressing in the first round was something of an arduous task for the Tigers, which just got by Florida Gulf Coast at home. The Red Raiders coasted past SWAC opponents Prairie View A&M, and have one of the more underrated goal scorers in the country in Janine Beckie. If junior center back Kala Faulkner can’t contain Beckie, it could be a long day for a talented but slightly inexperienced Auburn side.

The Gators have the goods, but the question is can they deliver? One of the nation’s most talented and experience rosters, Florida packs a punch in a number of positions, from forward Savannah Jordan, midfielder Havana Solaun and defenders Christen Westphal and Tessa Andujar.

A rapidly-improving California side is certainly the underdog here, and will lean on its blend of youth and experience from players like Taylor Comwau, Grace Leer, Annia Mejia and Emily Boyd to secure the road win. Fifteen different players have tallies this season, helping the team overcome an early injury to the reliable Ifeoma Onumonu.

On the heels of besting rivals Kansas 3-1, Missouri looks to best Pac-12 side Washington in one of a handful of SEC vs. Pac-12 tussles. Leading scorer Taylor Grant delivered the goods with a brace last weekend, but there’s no doubt Missouri enters with a point to prove. The Huskies hadn’t won in its final four games of the regular season before topping Rider 1-0 last weekend, and need big-time performances Jaclyn Softli and Kate Bennett to survive until Sunday.

A come-from-behind win for the Razorbacks kept them dancing into the second round last weekend, where they now face the difficult tasks of taking down Stanford at the Farm. The Cardinal showed what their offense is capable of with a nice dramatic win of their own, turning a 2-0 deficit into a 5-0 win against Cal State Fullerton. The attack, behind Taylor Uhl, Lo’eau Labontu and Chioma Ubogagu, is suddenly becoming a strong suit for a Stanford team that could start to peak at just the right time.