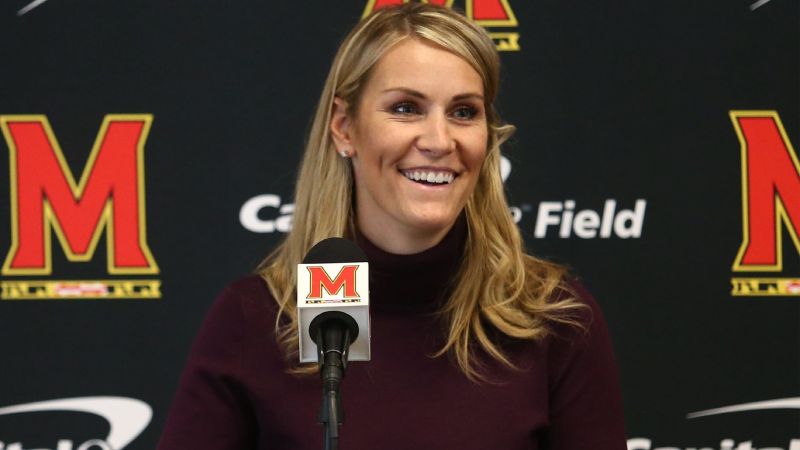 She remembers the energy of the team, the intensity of the crowd, the relentless running.

And, after accepting the Maryland head coaching job in December, Nemzer wants to bring that energy, that intensity, and those wins back to College Park.

Nemzer takes over a team with little recent success. The Terps haven’t had a winning season since 2012, and their last victory over a ranked opponent came in 2019. Still, by channeling the memories of old, and cultivating a winning mentality, Nemzer is looking to turn the program around.

For the Maryland native, it all starts with the talent already in the squad. The Terps have pieces. A former high school All-American here, a promising transfer there. But in recent years, that talent hasn’t quite developed. Whether it be due to a series of injuries, or a system unfit to get the best out of highly-rated individuals, the story of recent Maryland players has been one of potential unfulfilled.

At first, then, the goal is to squeeze every ounce of talent out of the existing group.

She’s certainly familiar with the Terps’ options, having handled most of the scouting duties as an assistant coach at Rutgers from 2009-2021.

“We always said: the talent is there. It just needs a little bit more fine-tuning in certain places,” Nemzer said.

That crucial place is at the back, Nemzer said. Maryland conceded the fourth-most goals in the Big Ten, and finished the 2021 season with the worst goal difference in the conference. There were leaky moments, and games that got out of hand. The Terps conceded five against Penn State on October 8, and followed it up with a 5-2 defeat at home to Rutgers.

A center back in her playing days — and self-dubbed defensive specialist — Nemzer sees protecting their own net as a good starting point. And she’s made steps in sorting that out already. The Terps have brought in six transfers, including four defenders.

There’s pedigree in the revamped back line, too. Newcomers Christa Waterman and Halle Johnson were all-conference selections in 2020. Meanwhile, Sydney Urban started 16 games for Florida. All three are expected to be in the mix for a new-look defense.

She's also faced with a challenge at the other end of the pitch. Maryland was the lowest-scoring team in the Big Ten last year, and only Northwestern created fewer chances. But Nemzer believes with a solid defensive basis, that a counter-attacking system could be the answer.

The Terps are among the paciest teams in the league, and though the current roster has yet to lean on a proven goalscorer, Nemzer hopes hitting teams on the break could lead to more chances for those playing higher up the pitch.

“We're going to be on our front foot, where it's about results when we get into that final third, Nemzer said. “The more results that we produce in the final third, the better chances that we have of scoring.”

So, Nemzer has a philosophy, and has added a few pieces to match.

But the real priority — the ideal route to success — is cultivating a winning mentality. It’s something Nemzer asks all of her recruits, seeking out the requisite desire to build up a program from the basement of the Big Ten.

“I asked recruits this: do you love winning? Or do you hate losing?,” Nemzer said. “I hate losing because I lose sleep over it.”

Bringing in athletes who answer those questions with the right attitude — and also have the talent to help the team develop — will be key. But it likely won’t be an overnight change. Though Nemzer has brought in transfers and picked up a few recruits, she’s still effectively inheriting someone else’s squad.

Still, regardless of who she’s coaching, Nemzer has the sleepless nights. The ones where she remembers chances squandered, tackles missed, mistakes made.

And if that happens, if that mentality comes together, there might just be some more wins to remember.

“We have the foundation, they already know how to do it, but let's let's bring Maryland back to where it was,” Nemzer said.