TAMPA, Fla. – The W-League announced its Team of the Week for the first week of the 2013 season today, honoring New York Magic – F.A. Euro forward Brittany Pfaff as Player of the Week after she led the Magic to an upset win on the road against 2012 conference champions the Washington Spirit Reserves. 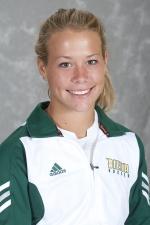 Pfaff, preparing for her senior season at Siena(w), started the Magic comeback when she set up fellow Team of the Week selection Lorena Maggio for the tying goal in the 75th minute at the Maryland Soccerplex. Pfaff then finished the upset with an 86th-minute goal to capture the three points.

Magic defender Kelsey Hegg was also chosen after leading the defense in the win during a light opening weekend of W-League action. Joining her on the backline are Nataly Arias of the Atlanta Silverbacks, who anchored the defense in a 2-0 win at Carolina Elite, and Virginia Beach’s Jessica Kalongi, who recorded a pair of shots in a 2-1 victory against the Fredericksburg Impact.

Joining Maggio in the midfield are Fredericksburg’s Kara Blosser, who scored the opening goal in the loss against Virginia Beach, and Washington’s Hayley Siegel, who was strong in a losing performance vs. New York. Atlanta’s Carolyn Campbell got the nod in goal as she made eight saves to notch the shutout at Carolina.

Rounding out the forwards are Virginia Beach’s Shan Jones, who scored the game-winner vs. Fredericksburg, and Atlanta’s Cherie Sayon, who tallied both of her team’s goals to take the early scoring lead.

The W-League ramps up this weekend with 11 of 25 teams in action in a seven-game slate. Teams playing their 2013 W-League openers include 2012 finalists the Pali Blues (Saturday vs. LA Strikers) and the Long Island Rough Riders, who play host to the Fredericksburg Impact on Saturday.

The W-League is the first and longest-standing women’s soccer league in North America. The 2013 W-League campaign will feature 25 teams in four regional conferences playing 10-12 regular season matches. Featuring current and former international and professional stars, the W-League also provides elite amateurs the opportunity to compete while maintaining their eligibility as college student-athletes.  The league is recognized throughout the world for providing superior competition for female players, while offering affordable family entertainment for fans throughout North America.