North Carolina remains a step ahead Anson Dorrance returned to his throne for the 21st time on Sunday, and it hardly looks like it will be his last.

The head coach of the North Carolina program was once again given the honor of being the final coach to speak this season after winning the 2012 NCAA national championship following a 4-1 thrashing of Penn State. 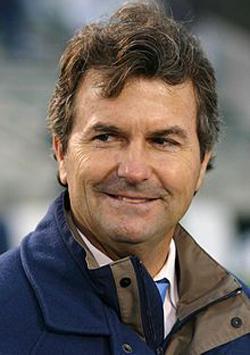 “Carolina kept us searching for the next answer,” Penn State head coach Erica Walsh said in the postgame press conference. “But every time we tried something, Carolina came back with something else.”

The high-pressure, direct style that Dorrance has so routinely implemented seems so simple to figure out, yet a number of excellent coaches have not been able to consistently exploit the weaknesses of it.

For opposing players, the pace of the game is what quickly drains them, as the Tar Heels send waves of players off the bench at the tired legs.

“It was definitely challenging,” Penn State junior Taylor Schram said about playing against North Carolina and its depth. “Every 15 minutes, they would just sub in a new line.”

With 21 players appearing for the Tar Heels on Sunday, Dorrance showed off the depth on his bench and his ability to get a collective group to buy into his ideology.

“My dream for my collegiate team is to try to play 19 players per game,” the coach said after the game. “I tell them how they can play - if you will defend for me, you will play. There’s nothing complex about the demand.”

There is nothing intricate about any of it, and yet North Carolina continues to collect NCAA titles like they are tokens from weekend getaways.

“The classic question you get is ‘Does it ever get old?” Dorrance said. “Honestly, it gets better.”

With his continued success, the former U.S. Women’s National Team head coach is forcing the other elite programs of women’s college soccer to get better as well in hopes of keeping pace with his unstoppable juggernaut.

“We saw another level of fitness today and you could see- whether it’s either the volume of players or the overall fitness level,” Walsh said. “You keep redefining your standard, and it’s always an education for us.”

It was an education for Walsh like it was a lesson for Stanford head coach Paul Ratcliffe, BYU head coach Jennifer Rockwood, and Baylor head coach Marci Jobson in the previous rounds.

They all came so very close to knocking off Dorrance and ending his run of at least one title every three years since women’s soccer became an NCAA sanctioned sport in 1982, but the king is still the king even as the competition gets better.

“The opponents are better, the coaches are continuing to evolve and become more sophisticated,” Dorrance said. “I consider our championship obviously marvelous, but we certainly got some breaks along the way.”

The breaks that come when you have a roster littered with youth national team stars and a coaching staff that includes all-time women’s soccer great Cindy Parlow and the most successful college soccer head coach in history.

It is a pretty safe bet to say those breaks will keep coming, as Dorrance remains still a step ahead of the rest.