Early indications are that it’s going to be quite the battle for the Northeast Conference women’s soccer crown this season.

From top to bottom, the improvement in the NEC has been significant, and Monmouth, LIU Brooklyn and St. Francis (PA) are all locked and loaded to compete vigorously for the coveted spot in the NCAA tournament. 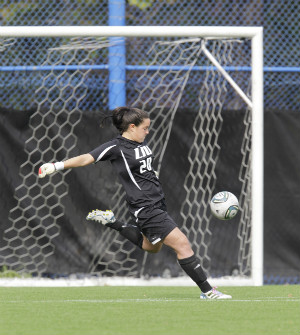 Coaches are also expecting at least one team to come out and surpass expectations.

“Our conference always has one surprise,” Monmouth head coach Krissy Turner told TopDrawerSoccer.com. “There’s always one sleeper team. I’m not really sure this year who that will be.”

Watch out NEC – St. Francis (PA)(w) appears to be headed towards an even better season this fall.

“I think we’re going to be stronger than last year, which is a good thing,” head coach Brenda van Stralen told TopDrawerSoccer.com. “Now we’re going to be junior-senior heavy, instead of freshmen-sophomore like last season.”

While the team may be more experienced, it’s going to be a difficult opening stretch at the start, with visits to San Diego State and Long Beach(w), a pair of games that van Stralen hopes will give her side a firm picture of where they are at early on in the season.

Regardless of performances, the conference schedule remains a priority, and if back-to-back NEC Player of the Year Tesa McKibben can have another big season, it’ll be positive news for the Red Flash.

Defender Alecia McNiff and senior goalkeeper Brianna Butcher will look to lock down the opposing attack, while big things are also expected from attacker Eloa Nascimento, who will be in her second year.

Putting together back-to-back championship-winning seasons is no simple task, but it’s a goal that the coaches and players of LIU Brooklyn(w) hope to achieve.

“We’re looking forward to coming back with this group and looking for some of the younger kids to step up and make their impact,” head coach Tracey Bartholomew told TopDrawerSoccer.com.

Of course, for a team that has finished in the top four and qualified for the NEC Tournament every year since 2005, there’s a foundation of success to work from.

And there’s plenty of talent on hand to keep things rolling. Toni Smith, a forward capable of the spectacular, missed last year with an ACL injury, and is now healthy and ready to contribute, while Katie Egan is a converted defender who enjoyed a standout 2011.

Bartholomew’s biggest quandary is in goal. She has the last two NEC goalkeepers of the year in Jen Bannon (2011) and Jess Sexton (2010), with the latter missing most of last season because of injury.

Regardless of who ends up between the posts – Bartholomew didn’t rule out rotating her two ‘keepers – the team is looking forward to big things.

“I have really high expectations for this season coming off a championship for last year,” midfielder Nicole Labo told TopDrawerSoccer.com. “We really expect to continue things this year, and bringing back a lot of the talent – I know we lost a lot of key forwards last year – but we’re bringing in some really great girls, so I have really high hopes for this season.”

This fall’s Monmouth team is hoping to finish near the top of the NEC with a host of new faces, as a total of 11 freshmen are joining the program.

That fact will alter the way things are run during the opening stage of preseason.

“There’s a lot more teaching of how we do things, teaching our system, how we’re going to play,” head coach Krissy Turner said. “You have to focus on a lot of the little things.”

The team won’t lack experience, however. Junior forward Dana Costello, one of the team captains, bagged five goals and added 10 assists last year – her contributions this fall will be even more vital.

Alexandra Baca, a versatile player who can play both in midfielder and at the back, has played almost every minute of her two year career thus far. A healthy Kristen Brett – a physical center back who missed all of last year – is also a plus.

Then there’s the wild card of all the new players and how they fit into the entire group.

“It’ll be interesting to see if some of the newcomers can break right into the starting lineup and how they adjust,” Turner explained.

After showing a lot of potential and capacity to contend – losing in last year’s conference tournament on penalty kicks – Sacred Heart now must try and keep up after losing a couple of significant pieces.

Senior midfielder Jen Mulvey is going to be at the heart of those chances, along with defender Alyssa Brandofino, as both are coming off All Conference performances.

It’s hard to know if the team will be able to force their way into conference contention, although it’s safe to say anything can happen.

It was a record-setting year in 2011, as Robert Morris’ 11 wins were most in program history.

Can that be repeated? Hard to say, as the graduation of Ayana Davis and Brianna Bell leave big holes to fill, as a total of eight seniors moved on. However, defender Haley Vincent was influential in her freshman year and she’ll get a chance to shoulder even more of the load this time around.

Replacing Davis’ 11 goals is probably most essential, meaning more will be needed from sophomore Alexa Sarsfield, Cassie Raymond and perhaps maybe some of the incoming class to pick up the slack.

Experience is the key word here for Bryant, with 11 seniors on board.

One of the struggles encountered last season was an inability to score goals, with just 23 in 19 games (1.21). In order to push themselves out of the middle of the pack, they’ll need to finish much closer or exceed the 30 goal mark.

Candidates to make that happen include sophomore forward Shana Follette, Krista Johnstone and Suzanne Sanders. If the right offensive combination can be found, it would

With a majority of freshmen and sophomore on the roster, it’s a season of building for Mount St. Mary’s(w).

That doesn’t mean they won’t be ambitious, but one of the most important tasks heading into preseason is locating a source for goals. Leading scorer Sadie Winship has graduated, leaving a gap that Alicia Mirando and Kelly Baker must help to close.

Regardless of that, the team managed just 0.7 goals per game last year, a total that must go up in order for things to end on a higher note, so much more is required of this fall’s group if they want to make the NEC tournament.

Losing players is a hurdle that every college program faces heading into a new year, and Quinnipiac faces the tall task of replacing a significant portion of the team’s spine.

Goalkeeper Jill Kelley graduated, and while rising sophomore Tori Graessle picked up a few minutes of experience last year between the posts, it’s a critical spot on the field to lose.

Along with that, the team’s top two goal-scorers graduated as well. It will be up some of the experienced returnees, such as Shauna Edwards, Crystal Burns and Beck Kiting to soften the blow and help the team adjust on the fly.

There’s a lot to like about this year’s Wagner Hawks. While the team must do better in the conference, their overall record last year was above .500, and the team kept things tight at the back. Plenty of experienced players have returned.

And while last year’s All Conference forward and team leading scorer Julie Vigliotti also returns, the level needs to continue pressure upwards in order for Wagner to contend for a top four spot in the conference.

Juniors Jackie Nicholas, Amanda Sieferman and senior midfielder Monica Zurich are among those who must pitch in and help Vigliotti lift this team into contention.

The Blue Devils have been in something of a lull in the past few seasons, last making an NCAA tournament appearance in 2008, after a run of NEC success in the years prior to that. 2011 was also the first time in nine years the team failed to make the conference tournament.

Most coaches however expect them to bounce back and be tough as ever, and head coach Mick D’Arcy is no doubt going to have his group prepared to be back amongst the contenders.

Losing two seniors is going to be a blow, but it also leaves players like starting goalkeeper Nikola Deiter, leading scorer Rosie Maguire, sophomore Allison Kelley and Jewel Robinson all back with even more experience, to help this vaunted program back into the top four conference conversation.

After six seasons as head coach, Renee Montana was dismissed from her post just a few weeks ago on July 3, with assistant coach Marco Masucci tabbed as the interim head coach. The school also announced that a search for a new coach would take place after the upcoming season.

That creates an interesting dynamic for Masucci and the rest of his team for this season, as he’ll basically have a chance to audition for the full-time job, and with his recruits, as he brought in an incoming class of 14 players in his first year as assistant coach in 2011.

There’s not a lot of experience to go around the rest of the squad, however, with rising juniors Lindzy Williams, Elizabeth Langer and goalkeeper Sage DoVale among those bringing the experience.

So who knows – perhaps the biggest surprise of the season is a worst-to-first bounce back by FDU.