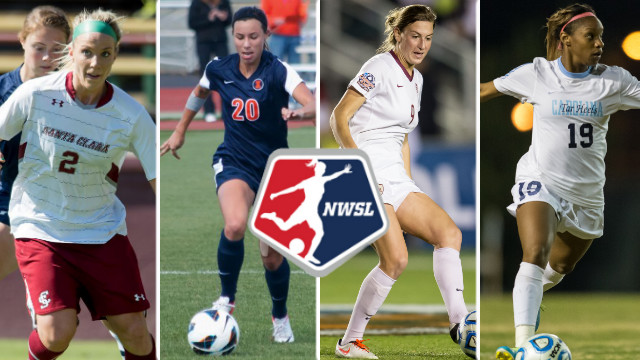 The National Women’s Soccer League 2014 college draft is just a few weeks away, as the top women’s professional league in the United States turns to the college ranks to fill its rosters for the upcoming campaign.

The nine teams will have their pick of senior stars to choose from, fresh off scouting and evaluating talent across the country over the past few months.

Below is a look at TopDrawerSoccer.com’s list of 20 best women’s pro prospects, a reflection of how college soccer’s elite projects at the next level:

Far and away the top prospect in the senior class, Dunn’s arrival in the NWSL sees her join after already earning a handful of caps with the full national team in 2013. She’s a tremendous athlete and soccer player, a surefire No. 1 pick for the Washington Spirit. The only question surrounding her transition to the next level is what position she’ll play: she’s featured as a right back on various national teams, while excelling in the midfield during her senior campaign. Regardless, there’s little doubt when healthy she can come in and start from the first day as a pro. 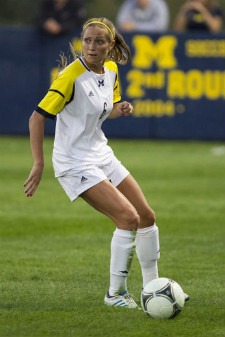 Another player with full national team potential (and experience), Johnston played as both a forward and midfielder for the Broncos, while has also seen time as a center back for the U20 and full national team. She’s athletic, good on the ball and has the size (listed at 5-foot-7) to play on the back line at the pro level. It could just come down to the best fit, but she’s a very, very promising talent.

A creative and crafty central midfielder, injuries plagued DiBernardo in her final season with the Illini. But surely that won’t cost her draft stock, as she’s another U20 World Cup winner and potential national teamer at the top of the heap. It’s difficult to imagine the Naperville, Ill. native slip past the Chicago Red Stars, which pick second and third overall in the first round.

An athletic attacker, Ohai represents one of several quality forwards that will look to break into the NWSL ranks. Her speed makes her a flank option as well, and while she didn’t put up gaudy goal numbers this past season, she has the ability make an immediate impact after a standout four-year career at Chapel Hill.

The nation’s premier senior center back solidified her status as such in the two games at the College Cup in North Carolina. She’s gritty, determined, reads the game exceptionally well and is comfortable enough with the ball at her feet. Matched up against some of the best attacks in the nation all season, she passed test after test, leading a stellar Seminole defense.

The Nittany Lion powerhouse finished her collegiate career with a whopping 71 goals in four seasons. When examining her skillset and body of work, she seems like another budding star. But, like other college standouts, she’ll have to prove that she can perform consistently against pro defenders, using her pace, power and athleticism to break down opposing back lines before providing the finishing touch.

It’s been a circuitous route for Marlborough to the precipice of pro soccer. After three standout seasons for Nebraska, she transferred to Santa Clara, where she had to sit out the 2012 season because of NCAA rules. The target forward came good this season with 15 goals, and can offer up good size and a goal poacher’s ability. The KC native certainly will be on the radar of her hometown team.

A wrecking ball combination of speed and power – a common set of attributes for a handful of these top senior forwards – Ezurike is a tireless striker who can setup goals just about as well as she can score them. Few match her work rate while leading the line, and she’s a definite Canadian national team candidate for the future.

The former Portland Pilot certainly could become a target of the Thorns, though it’s safe to assume that this Couger has the skills to come off the draft boards much higher. An offensive-minded center midfielder, Colohan has the ability to make runs into the penalty area and finish chances as she showed this past season.

A member of the 2012 Canadian Bronze medal winning side, Filigno has 55 caps with the Canadian women’s national team. That might render her ineligible for the draft if she becomes an allocated player, meaning she would be assigned to a club. However, if she’s not, she could become an asset in the first round, though some teams might be concerned by her low output in 2013.

Back-to-back conference defender of the year, two-time NSCAA All-American, Diggs may not have the youth pedigree of others on this list, but she’s put together a campaign showing what she might be able to do if given the chance at the next level. An athletically gifted center back, Diggs played all 2,155 minutes this season, leading UCF to 12 shutouts and an NCAA tournament appearance.

It’s buy high on Reeves at the moment after her scintillating finish to her college career. The Tech speedster troubles defenses with her pace, and is a solid enough of a passer to create for others. While more physical defenders can put her off her game, a move to the flank is a possibility, depending on where she lands and how quickly she might adapt.

From a team perspective, it was certainly a down year for Duke, despite ending the season in the NCAA quarterfinals. A lot of that came down to offensive struggles though, as Anasi led a young defense to a very stout campaign. Another U.S. youth national team veteran, Anasi could potentially slot in as an outside back or in the middle, where she can use her athleticism to snuff out dangerous opportunities.

A deep-lying central midfielder, DiGiacomo sits in the middle, wins balls and can distribute all above the field. They’ll be concerns about her step up to the pro level considering her competition in the Summit League wasn’t the greatest, but there’s no doubting that she’s shown potential to fit in nicely and contribute straight off the bat.

Overlooked for national teams throughout her decorated college career, Bledsoe is a three time NSCAA All American who has proved her quality time and time again. Perhaps most impressive when considering her resume is that she’s started every single game for Wake Forest over the past four years, setting countless records.

A box-to-box center mid, Laddish began her Irish career with a national title during a solid freshman campaign in 2010, and hasn’t suffered much of a drop off since then. She is one of her side’s most consistent performers in the middle of the park, can cover a lot of ground and helps win possession. Doesn’t score many goals, but does a lot of the little things to help her side control games.

First a defender, then a standout forward for the Cardinal, Verloo likely projects as an attacking player at the professional level. The versatility could help the 5-foot-9 former U.S. U20 international climb the draft boards. She offers a quick, physical and consistent presence along the forward line, and can score in a variety of ways up front.

A goalkeeper with the ability to make superb reaction saves, Wys has played behind incredible defenses during her tenure at Florida State, especially during the past two seasons. That might see some sleep on the former U.S. youth international, but they would do that at their own risk, as she’s obviously helped organize and communicate what she sees in front of her, and is fairly solid with her distribution.

A left-footed center back cut from a slightly different mold, Zardosky anchored a sensational Wolverine defense in 2013 that conceded a program record 12 goals all year. Showed the ability this season to make darting runs out of the back and set up teammates, finishing with nine assists, indicating that she might be useful as a left back as a pro or even the international level for Canada.

A nimble and fleet-footed forward, Silva enjoyed a standout season for the Mountaineers, scoring 15 goals and notching 13 assists in 2013. Another player who hails from an NWSL home city – Silva is from Overland Park, Kan. – she could be a sleeper for some team to grab. The crafty forward showed this year her ability to create it just as good as her ability to finish a move in front of goal.