The 2014 NWSL draft takes place on Friday at the NSCAA convention, as senior stars look to make the leap into the burgeoning pro league.

The consensus No. 1 is Crystal Dunn, and it would be a shock to see the Washington Spirit look at anyone else.

Here is TopDrawerSoccer.com’s projection of the first round:

No surprise here as the Spirit snap up college soccer’s top prospect. Dunn, who has experience with the full national team, can come in and play in the midfield or as an outside back right away. 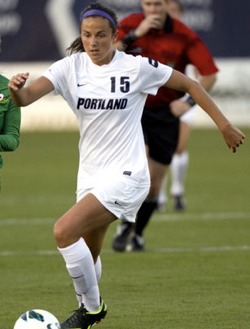 Head coach Randy Waldrum is still building his roster with the Dash, and brings in Ohai, a tireless runner and outstanding athlete who can stretch opposition defenses.

It’s a no brainer for the Red Stars to add this local star, as DiBernardo is a skilled, elegant and technical midfielder who can make plays in the middle of the park. She’s a potential future national team player as well.

After adding a midfielder, the Red Stars opt for another top former U.S. U20 WNT player in Hayes. While Christen Press is slated to join the team later this season, Hayes offers another athletic and commanding presence up front.

The slew of former U.S. U20 players jumping into NWSL continues as KC snaps up this Santa Clara star. Johnston featured at a variety of spots as a Bronco, from forward all the way to center back, and will be able to fill any of those holes right away.

While there may be questions about her position – Frisbie was a forward for the first three seasons of her college career before switching to center back – Sky Blue FC can grab the Pilot and figure out where she fits best in the lineup.

After losing recently allocated center back Ari Romero to the Dash expansion draft, the Reign can bolster its defense if Kallman is still here. A tough and tenacious center back, she can help make that defense better right away.

Sydney Leroux is gone and Kyah Simon tore her ACL in 2013 while playing for Australia, leaving the Breakers searching for forward options. That means the Breakers could target a goal scorer or someone up front with the skillset to make an impact this year, something that Verloo can do.

Another player with potential and speed to up front, Reeves trouble tough ACC defenses all year with her blazing speed, and the Flash grab her in an attempt to bolster their attack.