There’s something in the soccer waters at Virginia Commonwealth University (VCU), and three former players are happily telling the story to anyone who will listen.

The beautiful game has kept Romano Paul, Trevor Spencer and Derrick Etienne connected through the years — as alumni games and email threads do — but the former VCU players now have an even stronger bond, thanks to their three daughters, are competing at this year's Under-20 Concacaf Championship over the past week in the Dominican Republic. All three are alive heading into this weekend's Round of 16 matches. 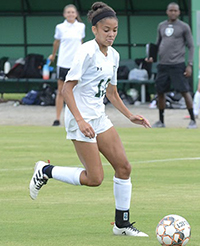 “My emotional list is short but this ranks up there,” explained Trinidad & Tobago native Paul, whose daughter, Tori played in all three group games for T&T over the past week.

The senior Paul was recruited by former VCU coach Lincoln Phillips — for whom he played from 1990-1994. Seeing his daughter reach this point on her own soccer journey is surreal, to say the least.

“I’m proud to see Tori have the opportunity to represent Trinidad and Tobago at the U-20 and Senior levels,” he said. “It’s been a great journey.”

Tori, 17, has been making a name for herself for a while — going back to when she was the only girl on all-boys teams, playing without fear. Having recently committed to play collegiately at the University of Maryland (where she will enroll in the fall), Tori is following in her father’s footsteps — albeit with a bit more speed than her 50-year-old old man, who is happily sitting back and watching the growth.

“She played with the senior [Trinidad & Tobago national] team and is now with the U20s,” the beaming dad explained. “Competing at the international level has always been one of her goals so it’s great to see her achieving it ... she is living her dreams and I’m just along for the ride.”

Spencer, a native of Kingston, Jamaica, is right there with Paul. He played at VCU from 1996-1998 (for Tim O’Sullivan), and was a student until 2000. Spencer’s daughter, Alexia, 18, played her club ball at FC Richmond Soccer Club, where Spencer is a Director of Youth Development.

The 45-year-old Spencer, who himself represented Jamaica at all youth levels, admitted that seeing Alexia do her thing on the field — representing Jamaica — ranks fairly high on his “lump in your throat” list.

“A lump in my throat that causes my heart to smile and warm tears running down my face,” says Spencer, who has three other kids, Brianna, 19; Elisha, 13; and Josiah, 11.

As for where he hopes this soccer journey takes Alexia, who is a freshman at Richard Bland College — where she led the school and conference last season with 20 goals and was named NJCAA Region X Championship Player Of The Year — Spencer has a list that includes “a college career, more caps for Jamaica National teams, and eventually a professional contract.” Jamaica finished first in Group E this past week, and faces Bermuda in a Round of 16 match on Saturday.

For Etienne, a native of Haiti, this is his second chance to see a child compete internationally.

His son, Derrick Jr., 23, is entering his fifth season in Major League Soccer, having spent the first four as a Homegrown Player with the New York Red Bulls. Entering his first season with the Columbus Crew, the younger Etienne has also been capped with the Haitian Senior National Team.

The senior Etienne, who played at VCU for two seasons (1995 and 1996), was also recruited by Phillips, who coached at VCU from 1989 to 1994 after leading Howard University to a national championship in 1971.

His daughter, Danielle (“Dani”), 19, is a freshman central midfielder at Fordham University (having just been named to the Atlantic 10 All-Freshman team). It's now her turn to represent Haiti, and the family. She started in two of the three group games for Haiti, which topped Group F with three wins, scoring 22 goals and conceding none.

“Her dream is to play professionally, as well as continue playing for the Senior National team and the hope is to continue to make history for Haiti and to regularly qualify for the World Cup,” continued Etienne, whose other daughter, Darice, earned her Masters degree from VCU in Forensic Psychology and is currently in Forensic Psychology Doctoral program. “I’m in full support of this dream.”

There’s no debating that VCU planted some solid roots that are bearing fruit, and on the highest of levels. That’s the sermon these three dads are preaching while beaming with pride — forever Rams.

“What attracted me to VCU is the diversity — Trinidadians, Haitians, Jamaicans and other nationalities got opportunities to dream, to grow, and produce kids who are aspiring to use their God given talent on and off the pitch,” Spencer explained.

Added Etienne: “It clearly shows the impact that VCU had on us as players which helped establish an mindset for excelling at the highest level which I believe clearly became a part of what we instilled in our kids: hard work, intensity, discipline, determination, teamwork, excellence, and and so much more. The DNA is undeniable.”

Not known as a big talker, a different Paul surfaces when the topic is his alma mater.

“It’s an interesting and remarkable story really, all former VCU players, from around the same era, with similar Caribbean backgrounds, having offsprings that were born in the US, played the same sport and were able to excel and represent their parents’ homeland at a national and international level that just happened to be playing at the same Regional U20 World Cup qualifying tournament some 20 years later,” explained Paul, whose other child — Troy, is a sophomore forward at Newberry College in South Carolina. “I’m not sure if many schools can boast of this occurrence.”