The Ohio Valley Conference enters 2012 with a chip on its shoulder. The conference did not gain much respect from that blessed computer that churns out the RPI, which is the standard for postseason berths, in 2011.

“Every game will be difficult in the OVC [this year],” UT Martin head coach Phil McNamara told TopDrawerSoccer.com. “No game can be chalked up as a win. Every season there is a few teams who can have a very quick turnaround.”

Southeast Missouri State head coach Heather Nelson cited the physical play in the league, which surprises other coaches who don’t go through the normal rigors of the conference.

McNamara added that it is rare for a team to stay at the top in the Ohio Valley Conference, which makes 2012 an interesting year for perhaps a new heavyweight to emerge from the oft-overlooked group. 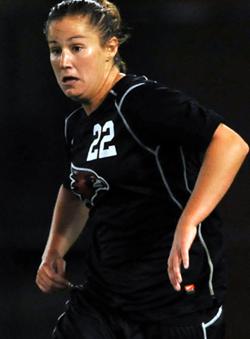 OVC 2011 Player of the Year Jessie Crabtree only played for the Redhawks for one season, but it was a memorable one. The Missouri transfer scored nine goals and recorded four assists in her senior season last fall.

Although her leading scorer is gone, head coach Heather Nelson is still confident with the group she has returning.

“I feel like we have a very good returning group of athletes,” Nelson told TopDrawerSoccer.com. “Erin Shulman is very capable. She missed five weeks of the season and still was one of the point getters.”

With Crabtree gone, freshman sensation Shulman will be the focus of the attack for the Redhawks. The Illinois-native was second on the team in points last year with nine goals in 12 starts.

Crabtree was not the only starter who graduated from last year’s team. In total, the Redhawks lost five starters from the league championship squad, and used the spring to experiment with new roles for players – look for midfielder Ali Bauer to drop into a center back role in 2012.

Even though the Redhawks will have some new faces in the starting lineup, Nelson set a schedule that is very difficult.

“That non-conference will be a challenge,” Nelson said. “(Taking on difficult opponents to help the RPI) was exactly our viewpoint. We gained a lot of confidence (with the success last year). We can compete with some outstanding teams.”

Head coach Lindsay Basalyga leads the Colonels into their eighth season of existence with the annual hope of improving on the previous season.

The main focus of advancement for 2012 should be in the offense. The Colonels only scored 18 goals in 20 games last year – the 0.90 goals scored per game average was good for 258 in the nation.

While the Colonels’ style of play lends to a more defensive game plan, the return of leading scorer Devon Saini (4 goals, 1 assist) should help improve on the lack of scoring.

Defenders Deja Tennon and Lauren Fant were All Conference second team selections last year, as well as keeper Annie Wickett. However, Wickett left after her freshman season and now incoming freshmen Sam Melton and Erika Wolfer will be on the hook from day one in between the pipes.

Last season was the best in program history for UT Martin. The Skyhawks made the NCAA Tournament for the first time after winning the Ohio Valley Conference Tourney.

However, UT Martin’s dream run quickly came to end with Memphis smashing the hammer down in a 7-0 victory in the first round.

The new season will have the Skyhawks thinking about a repeat trip to the postseason and closing the gap between the have and have-nots in college soccer.

Behind the guidance of head coach Phil McNamara and returners Hannah McGowen and Alyssa Curtis, the Skyhawks are poised to challenge for conference hardware again.

But first, the group will need to overcome a lack of leadership of seniors with only two on the roster this fall.

“We have compensated for that with bringing in transfers and maturity with newcomers,” McNamara said. He also spoke about the pressure on his team after the success in 2011.

“We have set the bar high, and we want to sustain that level of play. We know there will be a target on our backs from the start.”

The coach is confident in his group, as he believes his side, while lacking some of the athleticism compared to last year’s group, is a very good technical team.

One of the players he will be counting on for leadership on the field will be McGowen who notched 10 assists in her sophomore season.

“Hannah [McGowen] is coming off a great year. She came up with a number of big time players. Hannah is one who can help with the level of maturity that can serve well for a championship.”

Last season was a rocky year for the Racers. With a 1-5-1 record to start the season, there was a big hole for the ladies of Murray State to climb out of from the get go.

Coach Beth Acreman’s squad managed to win six of its last 12 games, which should give the young group some confidence heading into this fall. The Racers will be counting on returners Yi Du, Shauna Wicker, and Julie Mooney to help grow this squad into a contender.

The perennial powerhouse of the Ohio Valley Conference suffered a minor set back in 2011. With neither a league title nor a tournament crown, the Eagles came up short of expectations.

Head coach Warren Lipka, a two-time conference coach of the year, does a good job in getting the most out of his players, but with two seniors and 15 freshmen on this year’s team – he is really going to earn his salary.

Eagles’ fans should be excited about U.S. Women’s National Team member Lori Chalupny’s younger sister joining the program. Casey Chalupny (JB Marine) was a regular over the years with Missouri ODP. Teig Palmateer (Eclipse Select) is another name for Morehead State fans to circle amongst the large incoming class.

With both Meagan Iffrig and Michelle Auer back this season, the Cougars offense is ready to take off.

Iffrig and Auer combined to score seven of SIUE’s 17 goals last season. The junior and sophomore respectively gained conference recognition for their efforts.

The glory years of the early 2000s and late 1990s have seemingly passed by the Panthers of Eastern Illinois. With seven losing seasons in a row, the Panthers faithful are hopeful that head coach Summer Perala will put the team back to its winning ways.

Newcomer Karlee Deacon is expected to make an immediate impact to the attack. Deacon will join three-year start Kristin Germann as the two main options for the Panthers in the attack in the fall.

Despite an eighth place finish in the conference, there were some bright spots for Austin Peay State in 2011. Most notably, Colombian twins Natalia and Tatiana Ariza took the league by storm with 21 goals and 11 assists between the two of them.

The unfortunate news for the Governors is that the Ariza twins will likely miss most of the season while playing for Colombia at the Olympic games in London.

Expected to help fill the void is junior college transfer Jenny Musick, who had 30 goals and 10 assists in her two seasons with Parkland College.

With only 10 goals scored in 2011, the offensive output was not there for the Gamecocks to seriously challenge in the Ohio Valley Conference.

Head coach Julie Davis Carlson used the offseason to reinvent her attack with three new faces joining the forward rank from the 2012 class. After only having two players net more than one goal last fall, there is a massive need to find a consistent threat up top for Carlson’s group.

There has been a lot of shuffling for the Golden Eagles during the offseason. Starting goalkeeper Becca Toler packed her bags after the season and headed east to Georgia State.

Head coach Daniel Brizard brought in six new players for 2012 – three of them are goalkeepers. Freshmen Jordan Brown, Allison Barlow, and Nicole Hayes will be battling for the top spot in the net for the Golden Eagles.

This fall marks the first season in the Ohio Valley Conference for the Belmont Bruins. The Tennessee squad finished a respectable fourth in the Atlantic Sun last year with a 5-3-1 record. The bad news for Belmont, besides the dificulty of a new conference, is the lack of returning scorers. Gretch Sutch and Dani Stolt are gone. Sophomore Taylor Smith will be counted on to carry some of the heavy lifting in the attack this season.