Old is new as Stanford returns to the top

The Pac-12 title race is down to three and two.

There are three teams left in contention from the crown of the premier conference west of the Mississippi and only two weeks to settle the top spot.

The Cardinal held serve over the weekend with home wins over Washington State (9-6-1) and #40 Washington (9-6-2). The Cougars made things interesting on Friday holding Stanford to 2-2 at half. However, Mariah Nogueira’s seventh goal of the season, and third game-winner of the campaign, in the second half was enough for the Cardinal to keep a perfect record in conference play.

The new #2 team in the nation, UCLA assumed the title as the final undefeated team in Division I after Florida State’s 3-2 loss to Boston College on Friday. The Bruins took care of work over the weekend with wins over Colorado and Utah.

The Bruins host California and Stanford on Friday and Sunday, respectively, in the most important weekend of the season so far for B.J. Snow’s group.

San Diego State captured the Mountain West Conference regular season crown on Sunday with a 3-0 win over Air Force. It was the first league title for the Aztecs in the MWC, which previously won the MWC tournament in 2009. 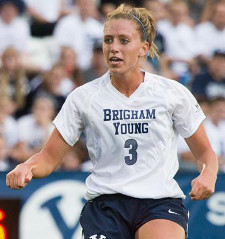 The #13 Aztecs close out the regular season with a home game against New Mexico on Friday.

Cougars Charge on in heated WCC

After a convincing 4-1 win over Gonzaga, BYU (14-1-1) moved up two spots to #6 in the TopDrawerSoccer.com Tournament 64 this week. Junior midfielder Cloee Colohan had a goal and an assist in the victory.

The Cougars sit atop the West Coast Conference with a 3-0-1 record at the midway point of league play. Loyola Marymount, San Diego, and #18 Pepperdine are only two points back.

Next up for the squad from Utah is a trip to Southern California for a game against San Diego on Thursday.

The #12 Aggies of Texas A&M matched the program record for shutouts in a season on Sunday in a 1-0 double overtime victory over Georgia. The Aggies day was not defined by defense though.

The SEC Western Division Champions took 33 shots in the game, but only managed to sneak one past Georgia goalkeeper Ashley Baker, who recorded 11 saves on the day.

The Aggies close out the regular season with a home game against #33 Missouri on Thursday. For the Aggies to win the SEC regular season outright, Texas A&M needs a win over Missouri and Florida to lose against South Carolina.

The Tigers of Colorado College (12-3-4) are streaking toward the finish line. The top team in the Conference USA standings has won five games in a row on its way to claiming a share of the league lead.

A win over UTEP (10-9-0) on Friday will give the Tigers their first-ever crown and the top seed in the conference tournament next week.

Down to the Wire

Utah State and Denver continue to keep pace with each other in the Western Athletic Conference with only one week left before the conference tournament.

The Aggies (10-2-6) are 5-0-2 in conference play with a game against Louisiana Tech on Sunday to close out the regular season.

The #27 Pioneers (12-1-4) are 4-0-2 in conference play and end the regular season with road games against Idaho and Seattle.