A couple of players in women’s college soccer returned to school with some new silverware.

Chelsea Stewart (UCLA) and Jonelle Filigno (Rutgers) snagged bronze medals at this summer’s Olympics with the Canadian women’s national team, part of a handful of players representing their respective countries as well as an elite NCAA college program.

“We’re just so happy to have inspired our country and to have medaled, because we’ve never been able to do something like that,” Filigno, a junior forward for the Scarlet Knights, told TopDrawerSoccer.com. 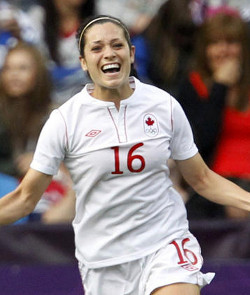 Canada was far from the only women’s team with active college players on the roster. Countries such as New Zealand, South Africa and Colombia competed with players from the NCAA ranks.

The presence of South Africa, while they didn’t progress past the group stage, was particularly notable as it was one of the first large scale international events that they competed in.

“I can’t even explain to you what kind of an experience it was, especially being treated as an Olympic team,” Stephen F. Austin and South African midfielder Kylie Louw told TopDrawerSoccer.com. “You get the best of everything – we as little South Africa have never experienced something like that.”

And while the South Africans never played their games in the heart of the games – the soccer competition was held in different stadiums throughout Great Britain – it was still a remarkable experience for their team.

“Even though we weren’t in London, the Olympic committee did a great job making sure we felt like we were part of the games,” Louw said.

Other players included New Zealand’s Betsy Hassett (California) and Rosie White (UCLA). This summer has been particularly busy for White, as she went from London to Japan for the U20 Women’s World Cup where she scored two goals.

But it really was the experience of Canada that grabbed significant headlines of these countries at the games. On their way to winning the bronze against France, Filigno’s side endured a particular difficult loss to the United States, a wild 4-3 encounter that was settled by Alex Morgan’s overtime goal.

And while Filigno and the rest of the squad did regroup and bounce back, it was without a doubt a low moment.

“It really sucked having to lose that game and knowing that we still had to fight with a medal,” she said. “It was definitely the worst feeling I’ve had throughout my soccer career, just because it was such a heartbreak.”

The 1-0 defeat of France in the bronze medal game helped soften the blow, and allowed the closing ceremonies to be a much happier occasion.

Now, with the women’s college season well under way, each player has brought back their Olympic experiences back to their respective program. The confidence is evident in Filigno, who has scored 4 goals in her first six games of the season so far. Louw, has helped Stephen F. Austin to a fast start with a goal and 6 assists through four games as well.

The Olympians know that they have a lot to share after a possible once in a lifetime experience, and seem to understand that.

“I’m hoping to bring back a lot of my experience,” Louw said. “I have shared a lot of it with my team, and I think they look up to me to be their backbone in a lot of situations on and off the field. I feel privileged to be that person, because I feel like I can fit that role.”