Des Moines, IA – On a hot evening at a lovely facility, the Des Moines Menace dominated a toothless WSA Winnipeg team with a final score of 4-0 which could have easily been much worse.  Come for the $1 hot dogs, stay for the soccer.

The Menace held the ball for the first 2 minutes before allowing Winnipeg to touch the ball foreshadowing the inequities in these two sides.  At the onset of this match, Winnipeg was unable to even field a full 18 man roster because of visa issues.  But having 2 players ejected only was going to impact their match on the next evening against Des Moines.  It was such a one-sided affair that I decided that I didn’t need to watch another version with these same two teams the next night and I decided to go home.

To put a positive spin on the WSA Winnipeg effort, they showed up on-time and they stayed for the entire match (well except for the 2 ejected players).

It’s very difficult to get much out of this mismatch.

The first goal was scored by John Sosa in the 17th minute.  He hooked a 20 yard free kick into the upper corner.  Nice shot.  I liked his celebration jumping onto the tables lined up on the sideline and posing. 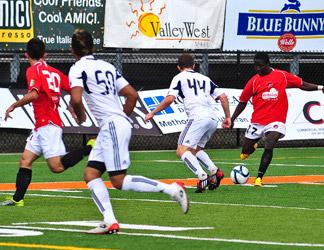 He scored the third goal in the 62nd minute from a penalty kick.  In this celebration he signed a ball under one of the table and presented it to the team owner.  For this act, the referee presented Sosa a yellow card.  Really?  Buzz kill.

The second goal was scored by Bryan Perez in the 41st minute.  He ran onto a bouncing ball, chipping the goalkeeper.  On the shot, Deshorn Brown came on ensuring that the ball was going in – tapping the ball in the goal deeper into the net.  I think it was Perez’s goal, but I wouldn’t be surprised if the tape showed otherwise.  However, the veteran Perez took the credit over the sophomore from Mobile (NAIA).

Brown was able to get on the scoreboard scoring the final goal in the 65th minute.  On the play, Ben Taylor served a long ball that Brown was able to “sombrero” over the on-rushing goalkeeper and then head the ball in from 6 yards into the open goal.

The best player on the field is Perez.  He’s at a different level in terms of technical skill, quickness and vision.  He’s dangerous because he can change speed exceptionally.

Sosa is a picture-perfect passer, but he needs to take better care of the ball on the dribble.  He is not in good shape, carrying an extra 10 pounds like a middle-aged player.  It’s too bad, because while he will never be a speed merchant, if he showed desire and being in shape, I believe that he could play professionally (e.g., USL2).

Taylor’s corner kicks were wasted with his poor accuracy.  Finally, he hit a dangerous one in the 55th minute after wasting numerous ones in the first half.

Brandon Fricke (Butler) is a solid defender who isn’t flashy but he’s committed to defend.  He is not going to make the scintillating pass, but if he plays simple he’ll be an important addition at Butler in the fall.  In the second half after he made a poor pass, he immediately pressured the ball and forced a turn-over. If he improves his technical aspects, he could become a good player.

Deshorn Brown (Mobile NAIA) has superior speed.  His first touch needs further refinement.  Additionally, he needs to learn how to receive the ball with a defender on his back.  He’s too flat rather than turning his body to put more of his body between the ball and the defender.

Lebogang Moloto (Lindsey Wilson NAIA) is a threat wide, but makes many tactical mistakes.  For example, in the 20th minute, he was able to beat 2 defenders rather than distributing the ball, he was dispossessed by the third defender.  In the 81st minute, he hit a terrific shot, but the goalkeeper made a better save!

Finn Jor (Northern Illinois) is an intriguing forward who is big and fast in 8 minutes of play.

Otis Williams (Marshalltown CC) is a tall player who has balance issues.

Kooten Johnson (Western Illinois) is a good dribbler who overly relies on his left foot.

Diego Marroquin is an adequate defender but I don’t foresee him being able to progress much further in his soccer career.  In the 57th minute, he cycled over to eradicate a problem in the back.

Jubril Lawal (Mobile NAIA) is a speedy right back that regularly overlaps and he is able to get his crosses off.

Luckily goalkeeper Andy Holt was in the shade of the stands in the first half.  Otherwise, he may have melted given his lack of action.  In the second half, the sun had gone down and he wasn’t threatened with sun burn.  It’s very difficult to assess a goalkeeper if he isn’t sufficiently threatened.

Without WSA Winnipeg’s goalie Dylan O’Connor’s countless deflections, blocks, and stops, the score would have been much more ridiculous.
Headlines
College Rankings HQ
View all rankings >>