One last chance for NWSL hopefuls? While every senior playing at the Division I level wants to keep their tournament run going beyond this weekend, it’s not going to be possible for everyone.

For the best of the best, there is something else at stake: a chance to prove oneself, and keep playing in 2014 in the National Women’s Soccer League (or perhaps abroad even). 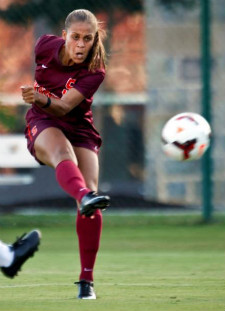 Scouts will likely be checking out tournament games over the weekend, and for many, this is the last time to show what they've got. Here are ten seniors with a chance to continue building a case for a spot in the NWSL next year, while also needing a big game to keep the season alive in the immediate future.

GK Aubrey Bledsoe, Wake Forest: The two-time NSCAA All American – and likely three at the end of this season – is one of a handful of quality senior shot-stoppers who will be in competition to compete at the next level. She’s logged more than 90 appearances in her college career, and with an undermanned side in front of her Friday night against Penn State, she’ll have plenty of opportunities to showcase her abilities.

MF Vanessa DiBernardo, Illinois: It doesn’t take long to notice the central midfielder’s quality – technically sound, graceful on the ball – though injuries hampered DiBernardo’s season. And while she’ll likely have plenty of opportunities in front of her next year, she can keep the season alive for at least another weekend if she can help jumpstart an attack that failed to score in the first round.

F Jazmine Reeves, Virginia Tech: Speed kills in women’s professional soccer, and it’s something that Reeves possesses in spades. She showed quality in helping the Hokies beat the Cavaliers a few weeks ago, and with a huge weekend ahead of her, can send another message to scouts that she has enough to help a professional team next year.

MF Julie Johnston, Santa Clara: Already with a couple of full WNT caps under her belt, Johnston is already a well-known commodity to head coach Tom Sermanni, excelling in central midfield and capable of stepping in as a center back. This potential final weekend sees the Broncos visit Blacksburg, with Boston University on the docket. If Johnston can help lead her squad into the Elite Eight, it would be another asset in her already sterling resume.

F Courtney Verloo, Stanford: One of the few veteran players on the Cardinal this season, Verloo leads the team with nine goals and six assists. A player with a lot of versatility, Verloo has played at the back and up front, something that is certainly going to help her earn consideration for a professional chance. Helping Stanford top a very good South Carolina side this weekend wouldn’t hurt either.

D Shelina Zadorsky, Michigan: A fixture in the Canadian youth program, Zadorsky earned her first cap with the full WNT earlier this year over in China. The defender, with nearly 80 appearances as a Wolverine, might not attract the same headlines as her high-scoring teammate Nkem Ezurike, Zadorsky has defensive quality that could lead to her earning a funding spot from the Canadian Federation for the NWSL.

MF Mandy Laddish, Notre Dame: The senior midfielder, a member of last year’s U20 Women’s World Cup title winners, won the national championship back in 2010 and would surely love nothing more than to go out on top. While professional considerations aren’t going to be defined by one stretch of games, the longer Laddish reminds coaches of her abilities, the better.

D Amanda Frisbie, Portland: Surely NWSL’s defending champion Portland Thorns noticed a quality player in their own backyard. Swapping her forward spot for the back line this season, Frisbie helped restore the Pilots to prominence, and has opportunity to both keep her season alive and continue to add to her resume with a trip to Nebraska for Friday’s game against Illinois.

F Kealia Ohai, North Carolina: Another talented Tar Heel in her final season at Chapel Hill, Ohai’s 10 goals and six assists have been significant. She may need to deliver against Indiana if Crystal Dunn remains out with a hamstring injury. Ohai, who was another member of the U20 WNT last year, has the pedigree and can certain continue to improve her stock with or without Dunn, with a strong performance.

GK Kelsey Wys, Florida State: The Seminole save specialist is at the tail end of a tremendous career. A four-year starter in Tallahassee, Wys has an impressive list of accomplishments, including two straight College Cup appearances, a microscopic goals against average of 0.75 and the ability to change a game with her shot-stopping prowess. Helped her side stay alive on Thursday night with a win against Mississippi, and faces Colorado(w) on Saturday.e