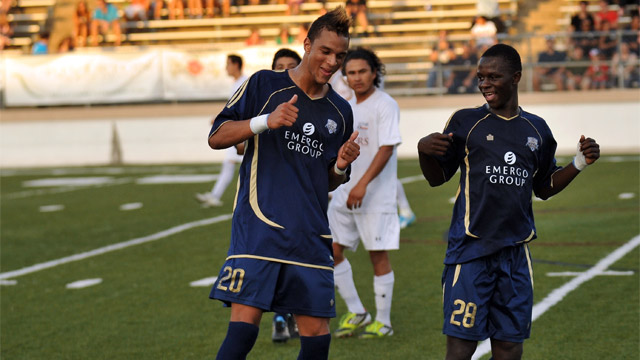 Sports hernia, fractured foot, and high ankle sprain – just a sampling of the laundry list of injuries Khiry Shelton has suffered in the last few years.

The first two have been known to derail careers, but Shelton, somehow, continues to comeback from each knock stronger.

Perhaps, it is his uncanny resolve that has made the path back to success so common for Shelton.

The 19-year-old grew up as an Army Brat. He was born in Colorado, moved to Germany (where he picked up the sport), settled in Texas during his teenage years playing for Lonestar SC, and eventually migrated to the Pacific Northwest to suit up for Oregon State. 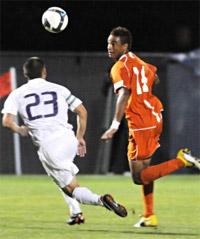 Shelton’s injury timeline is more compact, with the first, the sports hernia, occurring as he was just starting to break through on the national level with the U.S. U18 Men’s National Team.

He battled back from that speed bump and was off to a good start in his freshman campaign with the Beavers last fall, before a fractured foot limited him to only six games on the year.

He recovered, once again, and started off his sophomore campaign this fall with three goals in three games to lead the Beavers to a 2-0-1 record.

His play left one coach remarking to TopDrawerSoccer.com, “video does not do [Shelton] justice. He is good.”

Shelton was sky high and the Beavers were rolling. It looked like Shelton was well on his way to making a big splash in college soccer in 2012.

Then a freak play put him back in the trainer’s room. A Notre Dame defender landed and rolled up on Shelton’s leg in the first half of the game. He limped off and did not return. He classified it as a high ankle sprain, but he expects to be back for the game against Wisconsin-Green Bay.

“It is a lot different from my injury last year,” Shelton said almost relieved by the extent of it. “This is temporary. I’ll be back soon.”

Oregon State lost that game to Notre Dame, 1-0. And then lost the next game to Indiana 3-2. Revisionist history would probably point out those games would have been different with Shelton, one of the top players in the Pac-12, on the field, but he is looking forward and not back.

Forward to a future that includes possibly getting this team to the NCAA tournament.

A berth to the postseason has been lacking from the Oregon State records over the past few seasons. The team has enjoyed success in developing talent, i.e. professional players Robbie Findley and Danny Mwanga, but the results have not always equated to the caliber of players in Corvallis.

This year’s team could change that. Shelton along with Emery Welshman, Roberto Farfan, and Mikhail Doholis make up the attacking quartet that is difficult for even the top defenses to stop when all four are on the field.

Shelton, while quick to heap praise on all his teammates, is the star of the show according to opposing coaches and scouts.

His pace and ability to finish in traffic are a bit reminiscent of Teal Bunbury during his heyday in Akron.

Shelton quickly dismissed the comparison though.

“He sees the game really well,” Shelton said about the Sporting Kansas City forward. “He puts himself in a good spot to score, and I am still working on that. We do have some similarities, but we do a lot of things different.”

It was difficult for the Oregon State player to pinpoint a comparison. He said that no one had ever said he played like one particular player before.

Shelton is more of a playmaker than Bunbury. He pulls the strings and just wants to win. He said that he is comfortable being the scorer or the provider depending on what the team needed from him.

That mentality allows him slot into multiple roles in the attacking framework of the team, as he did this summer for the Austin Aztex in the USL Premier Development League where he netted five points in five games before he went to Kansas City to train with Sporting for a week.

“It was fun,” he said about the experience. “I got to see the competition level. It was good to train at a high-level.”

The professional opportunities could be in the near future or they could be a couple of years off, as Shelton has approached the next level as something that is in his outlook but he is not putting a timeline on it.

There is a timeline on his youth national team aspirations though. Shelton was born in 1993, so his last shot at a youth World Cup would be next summer’s team.

Communication with the Federation has been nonexistent since the sports hernia injury, but playing in the Pac-12 allows him the chance to catch the eye of national team scouts at pretty much every game – something Shelton cannot wait to do.

“I will work hard to get back in the conversation,” he replied when asked about making the U20 MNT.

Doubt him at your own peril.