This lopsided showing unfortunately played a part in the Pac-12 being relegated to only one bid for the NCAA tournament.

The Bruins made that one ticket count with a trip to College Cup, where they lost to eventual champions North Carolina in penalty kicks.

Repeating that commanding season will be nearly impossible for UCLA given the players lost in the offseason.

UCLA saw its magical attack dissipate when Kelyn Rowe and Chandler Hoffman decided to capitalize on good seasons and sign Generation adidas deals. The Boys of Westwood also lost their leader and coach on the field in Andy Rose, who joined MLS as well.

Replacing next level talent is never easy especially in the attacking department and the losses were compounded when expected 2012 recruits Marc Pelosi (Liverpool) and Mario Rodriguez (Kaiserslautern) signed professional contracts before joining the program.

Yet, Pac-12’s preseason poll still put UCLA as the overwhelming favorites with all but two of the first place votes from the conference coaches. Washington and California claimed the other votes. The NSCAA (coaches’) poll also thinks pretty highly of the new look Bruins with the second spot in the nation.

Those are lofty expectations for a team with inexperienced players likely in influential roles, yet UCLA tends to win league championships in succession and perhaps history will continue to favor the repetition of UCLA’s dominance.

The strength of UCLA this season is in defense. The Bruins return three of four across the back (Patrick Matchett, Joe Sofia, and Matt Wiet) that only let in two goals during conference play last fall.

Former U.S. U17 Men’s National Team keeper Earl Edwards is finally in line to get the bulk of the minutes in net after biding his time for two seasons while Brian Rowe was there. Edwards did well this summer with the Ventura County Fusion in the USL’s Premier Development League (PDL) with a 0.4 goals against average in six starts. 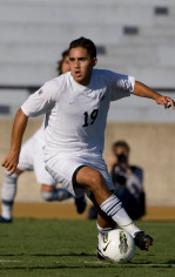 In the midfield, the Bruins brought in transfer Leo Stoltz (George Mason) to replace Andy Rose. Those are mighty big shoes to fill for the sophomore from Germany.

Ryan Hollingshead is the likely candidate to lead the attacking surge for the Bruins, but the inimitable winger is not a high volume goal-scorer and plays better with a striker drawing attention off of him. Reed Williams and Victor Chavez are both hoping to take that role as the starting striker with Hoffman now gone.

Head coach Jorge Salcedo is not shy when it comes to pulling the plug on a forward out of form; so expect to see regular changes among those positions this fall.

However, the opening schedule will put some pressure on the UCLA coaching staff to get it right from the start. Games against New Mexico, Maryland, Virginia, Tulsa, and UC Irvine in the first three weeks will really show how good this team is with the new pieces.

Huskies head coach Jamie Clark was disappointed, and rightfully so, that his squad did not earn a postseason berth in 2011.

In Clark’s first season in charge in Seattle, the Huskies improved rapidly and ended the season with seven wins in its last eight games. The promising results had at least one Pac-12 coach believing 2012 could be the year for Washington to win the conference after over a dozen years without a title.

The big question for Clark is up front, as he needs to replace Brent Richards, who signed a Home Grown contract with the Portland Timbers in the offseason. Richards led the team in scoring with 10 goals and fives assists last season.

The expected replacement is Darwin Jones. The Seattle Sounders Academy product showed this summer why Clark is so high on him with a standout performance in the PDL Playoffs in July. However, Jones has never played at the collegiate level and while he did torch a number of Division I defenders for the Seattle Sounders U23, playing in Clark’s system will be a different experience.

One of the best pieces of news this preseason has been the return of Tyrone Martin to the San Diego State lineup.

Well, Martin missed last season with a knee injury, but he was tremendous in his freshman campaign in 2010. The Indiana-native is a potential all-conference center back when fully fit and could make the Aztecs one of the teams to watch this fall.

Beyond Martin, the Aztecs brought in a strong freshman class and added a key transfer in Blake Wise (Indiana). They also return former U.S. U20 MNT midfielder Jose Altamirano who has flown under the radar for a few seasons.

The preseason poll picked San Diego State to finish fifth in the conference, but don’t be surprised if Lev Kirshner’s squad is in the mix for the title at the end of the season.

Long time head coach Bret Simon resigned in November and a number of potential substitutes lined up for a shot at the job in Palo Alto.

Former Charlotte head coach Jeremy Gunn was selected as the replacement to lead the Cardinal into a new era.

Gunn did not waste much time and began his take over of the West Coast with multiple trips to Southern California to add new talent to the 2013 classes and beyond.

For this fall though, the new man in charge has a shiny new piece to lead his squad into the competitive battles in the Pac-12.

Freshman Aaron Kovar has been the standout of the preseason with two goals and one assist in two games including the game-winner against Saint Mary’s over the weekend.

Kovar, a product of the Seattle Sounders Academy, is a left-footed midfielder who may not be in the college ranks for long if he keeps up this pace.

There is a strong argument to be made that Oregon State has the best attacking options in the conference. Khiry Shelton, Roberto Farfan, and Emery Welshman are as good or better than anything any other teams could muster.

However, that has been the case over the course of a few years (not with this same trio but with others), and Oregon State has rarely found the results to match the talent.

For one reason or another, the Beavers have been a middle of the pack team despite the talent that has passed through those Corvallis fields.

Oregon State added local product Mikhail Doholis to the fold this season. The midfielder is expected to contributor immediately after enrolling early at the school and partaking in spring training.

The Golden Bears did not win a conference game in 2011, but that did not stop the conference coaches from voting California to finish second this fall.

Head coach Kevin Grimes returns every player from last year’s squad, so experience is back on his side after not having a single senior on the roster for last fall.

Sophomores Christian Dean and Seth Casiple spent part of the offseason with the U.S. U20 MNT. Both are expected to be key parts in Cal’s bid to return to the top of the pile in the Pac-12.

Among the small incoming class, junior college transfer Luis Fuentes is the most ready prospect for the Division I level. Fuentes starred at Mt. San Antonio College (Southern California junior college) for the past two seasons.