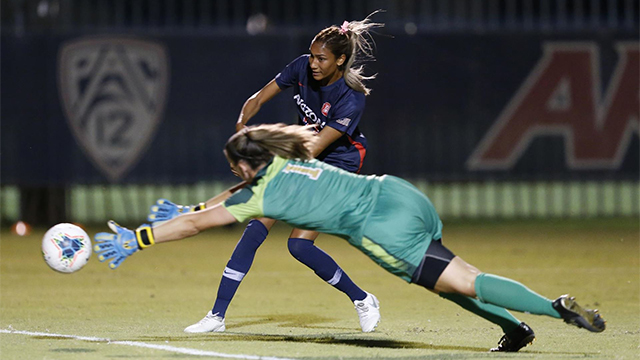 The second week of Pac-12 conference play is a wrap, and here is a look at the top storylines, updated standings, and results from all 12 games.

Rarely does Arizona beat UCLA. In fact, it almost never happens. Entering Thursday’s match the Wildcats were 1-23-1 all-time against the Bruins.

But they bucked the trend in a big way by routing UCLA 3-0 in Tucson.

Brooke Wilson scored what might be the goal of the year, spinning and netting a screamer from another area code for her team-high sixth of the season. Jada Talley scored the other two goals that night, as the pair of Southern California products have formed a formidable duo in the desert.

Goal of the season nominee! pic.twitter.com/dVNxQsDnDn

The Wildcats could not complete the sweep Sunday vs. USC, falling 1-0, but a split against the Los Angeles schools is still a successful weekend, especially with the way they defended, only allowing one goal and 22 shots all weekend.

The Bruins bounced back Sunday by scoring three goals in the first 20 minutes of their 4-1 win over Arizona State. The Sun Devils and California were the only Pac-12 teams to lose both games this weekend.

Taylor Kornieck netted a goal from the top of the box just three minutes into Thursday’s match against Oregon for her 95th career points, becoming Colorado’s new all-time leader.

And here's the record-breaking goal for @taylorkornieck 🐐

Unfortunately for the Buffaloes, the weekend spiraled from there. They were forced to settle for a draw against the Ducks after blowing a 2-0 lead.

Colorado then lost to Oregon State 2-1 on Sunday despite owning a 23-7 shot differential. Toni Malone was the hero in that game, showing some nice skill in the box to net the game-winner for the Beavers.

Take a look back at the goals that McReynolds and Malone scored for the Beavers and the incredible save in the last few seconds of the match from Skiba that allowed OSU to upset No. 17 Colorado in Boulder#GoBeavs pic.twitter.com/knWLyxswdS

It was Colorado’s first home loss all season, and OSU’s first road win since 2017.

As for Kornieck, it has been yet another stellar season for the senior, who has nine goals and five assists, ranking near the top of the Pac-12 in both categories.

Longtime UW head coach Lesle Gallimore, once a four-time All-American at Cal, had a sweet return to her alma mater Thursday as her Huskies downed the Golden Bears 1-0 in Berkeley.

The Huskies wound up losing to Stanford on Sunday (who doesn’t?), but they remain in good shape, sporting a 2-1 conference record entering a homestand against the Arizona schools.

Might an NCAA Tournament appearance be in the cards in Gallimore’s last season?

71' | Sekyra finds a head, van der Jagt does her job, and Carr finishes a beaut!

USC won a pair of one-goal games in the desert, holding on to beat Arizona 1-0 and Arizona State 2-1.

Kaylin Martin scored in the 90th minute to give USC a late lead on the Sun Devils, who answered by drawing a foul and sending Nicole Douglas to the spot. Anna Smith saved the penalty kick to seal the game.

USC was then outshot by Arizona 12-11 on Sunday, including an 8-2 edge in corner kicks, but still managed to keep the Wildcats out of the net.

Martin was key in that game too, sending a long ball to Tara McKeown who chased it down and slotted it for her ninth goal of the season.

Stanford is the class of the conference

With UCLA struggling and Stanford having already beaten USC, the Cardinal clearly are the team to beat in the Pac-12 right now, standing all alone at 3-0 atop the conference standings.

More impressive is their 12-2 goal differential in those three conference games, despite two of their opponents (USC and WSU) being top-10 foes.

Catarina Macario is all but a shoo-in to be the conference’s player of the year if she can avoid injuries. She comfortably leads the Pac-12 in goals (15) and assists (9).

The Utes have quietly strung together a seven-game unbeaten streak after tying Oregon State and beating Oregon last weekend. They have posted clean sheets in five of those games.

Carly Nelson continues to have a strong season in goal, leading the Pac-12 in saves (55) and save percentage (.846).

Sophomore Emali Mackinnon rivaled Arizona’s Brooke Wilson with a banger of her own in the win over the Ducks—quite the way to notch her first career goal.