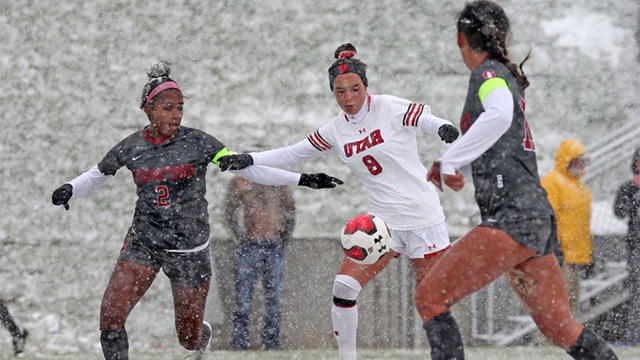 Only two weeks of Pac-12 conference play remain. Before we head into the final stretch, let’s take a look back at some notable developments from this past weekend and the current standings.

Sweeps can be elusive in the Pac-12, but Stanford, UCLA and Arizona managed to snag one last week.

The Cardinal cruised to a pair of 4-0 victories over Utah and Colorado, extending their winning streak to 10 games and shutout streak to seven games.

Catarina Macario netted a goal in each match, joining Kelley O'Hara, Christen Press, Sarah Rafanelli and Lindsay Taylor as the only players in Stanford history to score 20 or more goals in a season.

Madison Haley had three goals on the weekend, giving her nine on the year. Stanford needs to beat Arizona, Arizona State and Cal over the next two weeks to complete a perfect conference season. All three games are at home.

Sophomore Maricarmen Reyes, in just her second game back from offseason surgery, had the game-winner in the 87th minute vs. Washington, volleying in a cross from Ashley Sanchez.

The two connected at Washington State a few days later, though it would be Sanchez on the receiving end to tie the game in the 54th minute. Freshman Mia Fishel netted the game-winner in the 85th minute, bursting onto a through ball before slotting it inside the far post.

The Bruins have won five of their last six after a head-scratching 3-0 loss to Arizona. They move into a tie for third with crosstown rival USC.

Arizona downed the Oregon schools at home, with a 5-2 win over Oregon and a 2-1 victory over Oregon State.

Jada Talley was the headliner for the Wildcats. She had a brace in each match along with two assists against the Ducks. The junior is averaging two points per game in conference play. Only Macario is averaging more. Jill Aguilera had two goals against Oregon as well.

Now with 10 wins, the Wildcats are in solid shape to make the NCAA Tournament for the fifth time in six years.

Washington is going to end a three-year postseason drought. That we know by now. It’s also clear the Huskies are capable of doing much more than that.

They beat USC 2-0 on the road Sunday to reclaim sole possession of second place in the conference. Their six conference wins are their most since 2000.

Washington’s final three games are at home against Colorado, Utah, and Washington State, so there is a real chance it can hang on and finish second. That is extremely noteworthy considering the Huskies haven’t finished above fifth since the conference expanded to 12 teams.

Summer Yates continued her stellar sophomore season with a goal and an assist against USC, giving her 20 points on the season. She netted a free kick from near her team’s bench to help down the Trojans.

Senior goalkeeper Siena Ruelas had 17 saves on the weekend, including nine against USC, a new career high.

The Beavers split their road trip in the desert, moving them into double figures in the win column for the first time since 2012.

Freshman Abby Schwartz had a brace against the Sun Devils while sophomore McKenzie Weinert poured in her ninth goal of the season. Fellow second-year player Bridgette Skiba made some crucial saves as she continues to emerge as one of the top keepers in the Pac-12.

Sydney Studer scored to give OSU an early lead at Arizona, but Talley’s brace proved to be too much.

The Beavers have a difficult schedule the rest of the way, highlighted by two home matches against UCLA and USC, so it will be interesting to see how they fare down the stretch.

Either way, Matt Kagan’s first year at the helm has been something to remember.

Take a look back at the goals from last night's game against ASU that helped lead to a fantastic team VICTORY!#GoBeavs pic.twitter.com/8ufvv9uIuh

Oregon and Arizona State faced off Sunday, so one was bound to pick up their first Pac-12 win. It turns out the Sun Devils will have to keep searching. Oregon held on for a 1-0 victory in Tempe, thanks to an early goal by Ally Cook.

ASU will have to beat Stanford, Cal, or Arizona to avoid becoming the third team to go winless in Pac-12 play since the conference’s expansion.

The Pac-12 is arguably the toughest conference in the country for a lot of reasons, one being the various climates its teams have to perform in.

If it bothered the visitors, it didn’t show. The Cardinal won both games easily while Cal managed to earn a 2-1 win at Utah and a 1-1 draw at Colorado.

The Golden Bears remain unbeaten on the road. Emma Westin added two more goals to her ledger to give her 10 on the season, tied for third-most in the conference.

The Buffaloes only have one win in their last seven matches, and their final three games are on the road at UW, WSU and Utah, so they are in danger of missing the postseason for the second straight year.