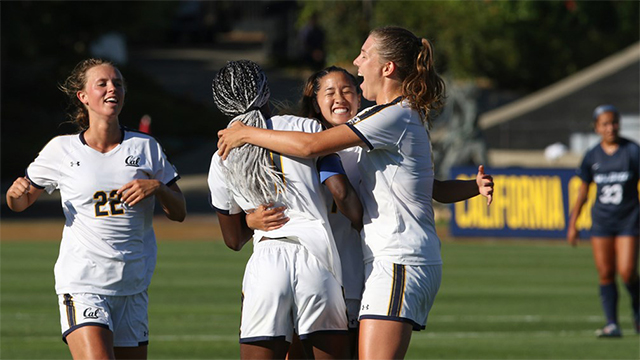 The Cardinal blew out San Francisco 9-0 on Sunday, tying their highest offensive output since 1993.

Catarina Macario recorded her first career hat trick. The reigning TopDrawerSoccer Player of the Year has gotten off to a scorching start, with nine goals and three assists in five games.

The Cardinal head to the Southern California this week to play Pepperdine and UC Santa Barbara.

UCLA was shut out for the first time in nearly a year in Thursday’s 2-0 loss to Santa Clara.

Santa Clara goalkeeper Courtney Ogren made several big saves, including stopping a point-blank shot by Mia Fishel, who was set up nicely by Ashley Sanchez.

Goals have not been easy to come by for the Bruins, who have scored eight times this year, good for 10th in the Pac-12. That is a surprise for such a talented team, though they have had a difficult schedule, to be sure.

Arizona State beat UC Irvine 3-1 Friday in Tucson, but fell to Oklahoma in Tempe on Sunday.

ASU’s Marleen Schimmer headed in a cross from fellow sophomore Nicole Douglas to tie the game at 1-all in the 77th minute, but the Sooners responded a few moments later when Ivanna Rivas tapped in a close-range goal after the ball was knocked around the six-yard box.

Schimmer and Douglas have combined for nine goals and six assists this year. Sophomore Eva van Deursen, who had a goal and an assist against UC Irvine, has three goals and five assists.

The Sun Devils head east this week to face Central Florida and LSU looking to avoid a losing streak.

There are only two teams in the country that have not conceded a goal: Arizona and Cal.

Arizona continued their hot start by picking up home wins over Oklahoma and UC Irvine. The Wildcats have outscored their opponents 15-0 so far and have won all four of their games by at least two goals.

Maybe the most impressive stat is that they have only allowed 13 shots, as their veteran backline has made things easy for goalkeepers Hope Hisey and Kendyll Humphreys, who continue to trade starts in net.

Arizona scored six goals on the weekend and they were recorded by six different players. Junior Jada Talley had a goal and three assists. Sophomore Brooke Wilson had a goal and two assists. She leads the Wildcats in scoring (4) after missing most of last season with a broken leg.

Cal improved to 5-0 by winning home games against San Diego and Montana. Emma Westin was responsible for two of the three goals in the win over USD, giving her a team-best five on the season. Abigail Kim scored the lone goal in the victory over Montana, drilling a penalty kick in the 48th minute after she drew a foul in the box.

Freshman goalkeeper Angelina Anderson has only been forced to make five saves. The Golden Bears head to UC Irvine on Friday before hosting Santa Clara on Sunday.

Arizona goes to Santa Clara on Friday, then San Jose State on Sunday.

USC dispatched Northern Arizona (3-0) and Nebraska (2-0), and it was a big weekend for reigning Pac-12 Freshman of the Year Penelope Hocking, who broke a scoreless tie in the 46th minute against NAU and netted both goals in the win over Nebraska.

She has five on the season, only trailing partner in crime Tara McKeown, who has found the net seven times. McKeown slotted a shot inside the far post against NAU.

Sophomore Anna Smith made six saves against the Huskers, starting in place of Pac-12 Goalkeeper of the Year Kaylie Collins, who has not played since Aug. 25.

The Trojans face Seattle University on the road Friday.

Check out Penelope Hocking's second goal of the day! pic.twitter.com/G5aadDcBvz

Collins intercepted a pass from center and took several dribbles before lacing a shot into the upper left corner. It was her team-best fourth goal of the season.

Down in Portland, a corner kick by Ameera Hussan was knocked in with some help from Olivia van der Jagt and Kennedy Smith, though it was ruled an own goal. Nevertheless, UW earned a much-needed 1-0 victory.

The goal capped what had been a defensive struggle, as both teams only mustered six shots apiece. Scoring has been an issue for the Huskies, who only have five goals this season.

Washington heads to the Lone Star State this week to battle Texas and TCU.

42' | Put the Huskies on top with this one, currently ruled as an own-goal.

Alexis Rushlow was the hero in Boise, sneaking a free kick from just outside the 18 inside the near post. It was her first tally since transferring in from Texas Tech.

Ute goalkeeper Carly Nelson had 12 saves during the weekend. She overwhelmingly leads the Pac-12 in that category (31). However, like Washington, the Utes have only scored five times this season, the lowest mark in the Pac-12.

They are back on the road this week to face a 1-4 Nevada team.

Roo, Thompkins come up big in Colorado’s win vs. Baylor

Freshman Roo Yarnell-Williams scored in wins over Austin Peay and Baylor, as the Buffaloes improved to 6-0.

Yarnell-Williams netted a header in the 16th minute against Baylor for the lone goal of the match. Senior goalkeeper Jalen Tompkins made a diving save on a long shot in the 70th minute to preserve Colorado’s lead against the Big 12 champions.

The Buffaloes will face defending national champion Florida State on Thursday in Tallahassee.

The Seminoles are 0-2 against the Pac-12 this season, with losses to UCLA and USC.

The Ducks had to flex all their defensive might to escape with a 1-1 draw against Clemson on Friday. The Tigers outshot Oregon 25-5.

Maya Hahn gave Oregon the lead in the 42nd minute by knocking in a deflected shot in front of the net. Mariana Speckmaier headed in a free kick in the 74th minute to pull Clemson even.

It was the second time this season the Ducks could not close out on the road. Earlier in the year, they surrendered an own goal to Fresno State in the 88th minute, and eventually had to settle for a draw.

Oregon almost did it again Sunday when they saw a 2-0 lead evaporate against Furman. This time, however, Zoe Hasenauer scored from 30 yards out in the 86th minute to propel the Ducks to victory.

They host Portland on Thursday, and will need to continue to sharpen up defensively before conference play starts. UO has allowed 11 goals this year, four more than the next Pac-12 team (Utah).

What a story the Beavers have been in their first season under Matt Kagan. After winning two games in 2018, they are out to a 5-0 start, adding wins against New Mexico and UC Davis last weekend.

The Beavers have posted four clean sheets in five games, and have gotten offensive contributions from a variety of players, a big change from last season when they only scored six goals all season, half of what they have already scored in 2019.

It will be interesting to see if OSU can carry their early-season momentum into road games at Houston and Rice. It will be the Beavers’ first time leaving Oregon this season.