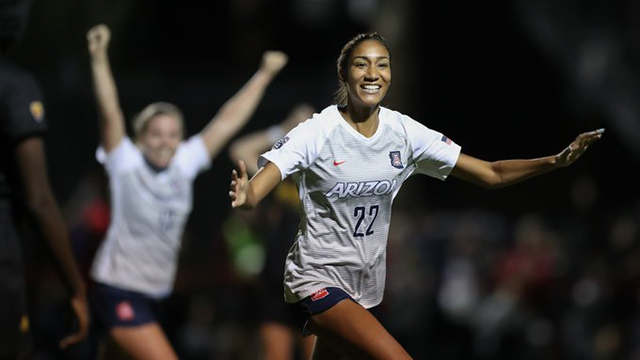 The Pac-12 season has come to a close. Before the postseason begins, let’s recap the final week of conference play and take at look at each squad’s NCAA Tournament chances.

The Wildcats needed to beat last-place Arizona State to avoid being on the bubble come Selection Monday and it got the job done. Eventually.

After peppering the Sun Devils all game, the Wildcats finally found the back of the net in the 82nd minute when Jada Talley scored her 10th goal of the season on a cross from Emily Knous.

Arizona is 38th in RPI, so losing to ASU, which went winless in conference play, could have been detrimental. The Wildcats should safely be in the NCAA Tournament and it’s a matter of whether or not they will host the first round.

Jada Talley puts one in the back of the net and the Cats take the lead!

As for Oregon State, its victory gives it a realistic shot of earning a bid to the NCAA Tournament, a remarkable feat considering where the program was last season.

Senior Paula Leblic came through in her last regular season game, netting a free kick in the 87th minute to lead the Beavers to victory over their in-state rival.

Excuse us as we watch this one on repeat...#GoBeavs pic.twitter.com/RdUOqrE5nE

The Bruins outlasted the Trojans, 4-2, in Westwood to finish in second place. USC scored in the fifth minute and UCLA answered with a pair of goals, before the Trojans leveled heading into halftime.

The second half was all Bruins. They scored two goals in a three-minute span and held the Trojans without a shot in the final 45 minutes. Leading scorer Tara McKeown and senior captain Jalen Woodward were out of the lineup for USC.

Selection Monday will be dramatic for both schools, as they each have a shot to earn a No. 2 seed and host (at least) the first three rounds of the NCAA Tournament should they advance that far.

With @ashleynsanchezz’s assist to @Lucy_Parker98, Sanchez broke the school record for career assists with 3️⃣9️⃣ and earns the @OpusBank #12Best moment. pic.twitter.com/wfBCvgSYiT

Washington was hoping to make coach Lesle Gallimore’s final season a special one, and it sure has delivered.

Summer Yates buried a penalty kick in the 82nd minute Friday to propel UW to its first win over Washington State since 2003. Not only that but the victory sealed a third-place finish in the Pac-12 and puts the Huskies in shape to host the first round of the NCAA Tournament, as they make their first postseason appearance since 2015.

The Cougars have done enough to make the NCAA Tournament and probably host the first round, despite their rare loss to Washington.

Colorado falls to Utah to put NCAA status in question

The Buffaloes will be on the bubble for the second straight season after they fell to the Utes 1-0 in Salt Lake City.

Colorado is 42nd in RPI, a few spots better than it was on Selection Monday last year when it missed the postseason.

Utah, 50th in RPI, will likely fall short of the NCAA Tournament, but can take solace in the fact it played extremely well at the newly-opened Ute Soccer Field, posting seven clean sheets in 10 home games.

Ireland Dunn had the game-winner against Colorado, making for a memorable senior night.

Stanford routed California 4-0 to complete the Pac-12 season with a spotless 11-0 conference record. It was a cruise to the finish. The Cardinal won each of their final five games by three or more goals.

Catarina Macario had two assists in the victory over Cal, giving her 17 on the season and 42 for her career, both of which are new program records.

As impressive as that all is, Stanford’s season is always judged on how it fares in the NCAA Tournament, so the real fun is about to begin.

The Cardinal have been the No. 1 overall seed each of the past three seasons and should receive the same fate Monday.