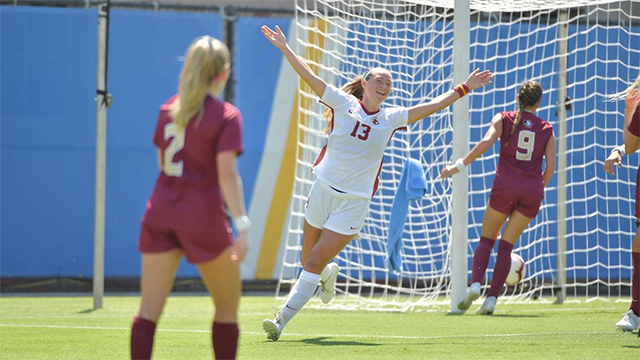 Two weeks of college soccer are in the books, and the Pac-12 is off to a tremendous start, with 36 wins in 43 games.

Here is how each team fared this past weekend.

Not surprisingly, the Cardinal cruised past Penn (5-1) and San Jose State (7-0) to improve to 2-0 and get head coach Paul Ratcliffe his 300th win at Stanford. The Cardinal outshot those teams 65-6.

Catarina Macario had a brace in each game, giving her six goals on the season. She also had a trio of assists against San Jose State. Her top running mate so far is senior Carly Malatskey, who has four goals, putting together a nice senior season.

Stanford only has one game this week, a road match against San Francisco. That match shouldn’t be too much trouble, but the Cardinal do have some bigger tests toward the end of the month when they head to Pepperdine, Santa Clara, and USC.

It was quite the weekend of soccer in Los Angeles where USC and UCLA swept Florida and defending national champion Florida State.

The Bruins are now unbeaten in their last 17 regular-season games. Jessie Fleming scored both goals in UCLA’s 2-1 win over Florida State, in which they limited the Seminoles to just five shots.

It was Marley Canales and Delanie Sheehan who found the net in a 2-0 shutout against Florida. Canales’ penalty kick broke a scoreless tie in the 48th minute. Sheehan netted a rebound in the 59th minute.

It wasn’t as easy for USC, which downed Florida 3-1 but needed overtime to beat Florida State, 3-2. That’s when a streaking Tara McKeown dished a through ball to a streaking Penelope Hocking, who snuck a shot inside the far post for the 100th-minute golden goal.

McKeown had a brace in both games. Now with six goals on the season, she has already matched her 2018 total and is tied with Macario for the Pac-12 lead.

Stanford, USC and UCLA all look like national championship contenders so far, though UCLA’s unbeaten streak could be in jeopardy Thursday when it heads to Santa Clara. USC hosts Northern Arizona and Nebraska.

It really was a golden goal! McKeown takes it up the middle of the defense and Hocking with the composure to finish!#FightOn | #FocUSed pic.twitter.com/JlFTAdx2a5

Penalty kicks loomed large in both matches. Taylor Kornieck slotted one in the 65th minute to lead Colorado past Kent State after trailing 1-0 midway through the first half.

Sunday, Texas saw a 90th-minute penalty kick ring off the crossbar. It would have tied the game and been a devastating meltdown for the Buffaloes, who were leading by two goals with 20 minutes to play.

The Buffaloes host Austin Peay and Baylor this weekend. Look for Kornieck to get going. The senior leads the Pac-12 in shots (26) but only has two goals to show for it, and one was a PK.

.@tessabarton08 with the goal and an assist from @CamillaShymka! Colorado now leading Texas 1-0. Watch on Pac-12 Networks! #GoBuffs pic.twitter.com/k9rt8ERqAZ

It was a tale of two games for the Sun Devils last weekend. Friday, they routed Tennessee Tech 7-1 with seven different players recording a goal.

Sunday, they failed to score for 90 minutes before junior Oliva Jones slotted a through ball from Lieske Carleer two minutes into the first overtime period to propel ASU to a 1-0 win over Weber State.

But it was a bittersweet moment because Jones suffered a leg injury during the finish and had to be carted off the field.

At 4-0 with a league-best 19 goals to their name, the Sun Devils are sitting pretty for now but they will face their biggest test yet this weekend when they host UC Irvine and Oklahoma.

ASU narrowly missed the NCAA Tournament last season, and these are the type of games that could sink or swim their chances come Selection Monday.

'92 | @Olivia15Jones with the first time finish and game winner! Assist by Carleer.

Oregon State off to best start since 2015

We’re only two weeks into the Matt Kagan era and Oregon State has already surpassed its win total from last season. The Beavers beat Villanova and Saint Mary’s last weekend to improve to 3-0.

Despite playing 100 minutes, the Beavers were all over Saint Mary’s two days later in a 3-0 win, scoring two goals in the first 20 minutes courtesy of Kaillen Fried and Abby Schwartz.

The Beavers have a prime chance to extend their winning streak this weekend, as they host New Mexico and UC Davis. With Oregon State looking like a much-improved team under Kagan, the Pac-12 could be the deepest it has been in a while.

The Bears have yet to concede a goal this season, as they left southern California with a pair of 2-0 wins over UC Santa Barbara and San Diego State.

Not only that but freshman goalkeeper Angelina Anderson was only forced to make one save all weekend. That is a far cry from 2018, when the Bears allowed 41 goals, the second-most in the conference.

Emma Westin was the star of the weekend, scoring in each game. She has a team-high three goals so far. Paige Meteyer, Denae Antoine, and Luca Deza each have two. Mia Corbin has three assists.

Cal has home matches against San Diego and Montana this week.

Averaging over five goals per game, the Cougars have the most efficient offense in the Pac-12. They scored six goals in each of their wins over Montana (6-0) and James Madison (6-3) last weekend.

Nine different Cougars are responsible for their 16 goals. Outside back Brianna Alger hasn’t scored yet, but she has tallied all four of her assists on corner kicks, a role she claimed when former Pac-12 assists leader Maddy Haro graduated after last season.

Morgan Weaver and Stanford graduate transfer Averie Collins have three goals apiece. Weaver fired 10 shots against James Madison, but was unable to find the back of the net.

WSU has a tricky road match at Gonzaga coming up Thursday.

HIGHLIGHT | Another set piece on the corner another Cougar goal, Alger finds her big target and Collins finishes it off#GoCougs pic.twitter.com/GevZeWw16D

After seeing their season-opener get cancelled due to lightning, the Wildcats took the field with fury Friday against Weber State, scoring all six of their goals in the first half, a new program record. Freshman Madison Goerlinger started and scored a header just two minutes into the match.

The Wildcats took a bit longer to get going Sunday in their 3-0 win over Tennessee Tech, hanging on to a one-goal lead until late in the second half.

Still, it was a dominant weekend for Arizona, who outshot its opponents 43-5. Sophomore Brooke Wilson led the charge with three goals. Fellow sophomore Iliana Hocking, Penelope Hocking’s twin sister, scored in each game, the first goals of her career.

It will be interesting to see who the Wildcats start this weekend when they host Oklahoma and UC Irvine to begin an extremely difficult stretch of games.

80' - That's three goals for Brooke this year as we take a 3-0 lead late! Great pass by Jada. pic.twitter.com/QTRpFVnxDi

Wormdahl still warming up for Oregon

Jordan Wormdahl became the first Oregon player since 2010 to score in four straight matches in the wins over Portland State (4-2) and Villanova (4-0).

With five goals in four games, the sophomore currently sits third in the Pac-12 in scoring. Quite the ascension for someone who did not score at all last season.

Oregon has other scoring options too. Four different Ducks found the back of the net in both wins last weekend, and 12 different players have recorded at least one point.

Zoe Hasenauer has been terrific as a playmaker, with a league-high four assists. First-year starter Katelyn Carter has struggled a bit in goal, posting a .563 save percentage.

Oregon heads to South Carolina this week to face Clemson and Furman. The Ducks have generally scuffled away from home, winning just one road game since 2017.

The Utes sorely needed to make a mark in the win column after losing to Clemson and Alabama to open the season, and they did that with shutouts of Utah State (3-0) and Cal Poly (1-0).

Salt Lake City native Aleea Gwerder volleyed in a cross against Utah State for the first-ever goal at the newly-opened Ute Field.

Freshman Courtney Talbot came up big against Cal Poly, looping a cross into the upper corner for the game-winner and her first career goal.

The Utes now have three straight road games coming up, including two tough ones this weekend at BYU and Boise State. BYU is 9-2 at home since the start of last season. Boise State has won 13 games in two straight seasons, is off to a 3-0 start, and features one of the top scorers in the country in Raimee Sherle.

After being blanked in its first two matches, Washington managed to score two goals against No. 6 North Carolina. Unfortunately for the Huskies, it still was not enough as they fell 3-2.

It was a crushing loss, seeing that Washington held leads of 1-0 and 2-1. The Tar Heels scored two second-half goals to escape Seattle with a win.

Washington rebounded Sunday by picking a 2-1 victory over New Mexico. UW sophomore Summer Yates scored in both games, and has accounted for five of Washington’s 11 points this season.

As much as the Huskies have struggled offensively, they can take some solace in the fact they have only allowed four goals and 29 shots in four games.

But they need to start winning and they head to Portland on Thursday to face Denver, a team that should not be taken lightly. Denver made the NCAA Tournament last season and handled Texas 3-0 last weekend.