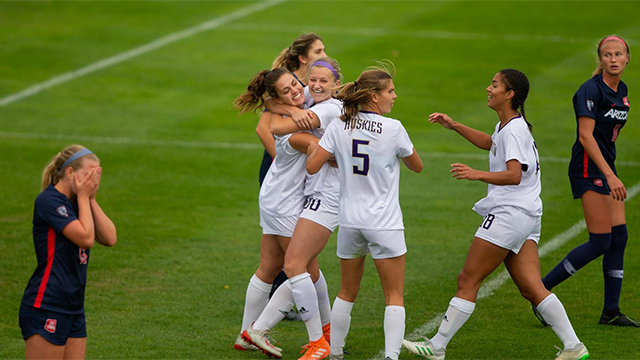 Another week of Pac-12 soccer is in the books. Here are some takeaways as well as a look at scores, upcoming matches, and the updated standings.

The Huskies were the big winner of the week, squeaking by both Arizona schools to improve to 4-1 in the Pac-12.

The two games couldn’t have been more different. Washington scored in the 4th minute against the Sun Devils on Thursday and held on for 86 minutes.

Sunday, the Huskies were facing a 2-1 deficit in the 84th minute when Summer Yates converted a penalty kick to force extra time. Then Ameera Hussen netted a free kick in double overtime to sink the Wildcats.

All four of the Huskies’ conference wins have been by one goal. If they can keep it up, they will be in great shape to make their first NCAA Tournament appearance since 2015.

Taking care of business at home is critical in the Pac-12, so it was a rough weekend for the rest of the Pacific Northwest schools, who went winless. Oregon State and Oregon both tied California and lost to Stanford, while Washington State fell to Arizona before drawing Arizona State.

Washington State failed to find the back of the net all weekend, despite generating 45 shots and 11 corner kicks. To be fair, the Cougars were the victims of some incredible goalkeeping.

ASU goalkeeper Giulia Cascapera stopped 10 shots against WSU and made 19 saves on the weekend, including a penalty kick against UW.

Arizona’s Hope Hisey made several acrobatic saves at Washington State before Kelcey Cavarra netted the game-winner in the 81st minute to lift the Wildcats to a big win in Pullman.

Arizona was on the verge of capturing its first-ever Pac-12 road sweep before that bid was spoiled by the Huskies’ late heroics.

USC and UCLA had better luck at home, dispatching Utah and Colorado.

The dynamic duo of Tara McKeown and Penelope Hocking continues to shine for the Trojans. McKeown had a brace against Utah, then scored and dished an assist to Hocking against Colorado. Both were 2-1 victories.

McKeown is second in the Pac-12 in goals (12) and third in assists (7). Hocking is tied with CU’s Taylor Kornieck for third in goals (9).

The star for UCLA was freshman Mia Fishel, who scored both goals in a 2-0 win over Utah on Sunday after contributing a goal in a 3-0 victory over Colorado on Thursday.

UCLA has won three straight since losing by three goals to Arizona a couple weeks ago.

Jalen Tompkins was a bright spot in an otherwise forgettable weekend for the Buffaloes, becoming CU’s all-time saves leader by stopping a season-high 11 shots against USC.

Colorado is winless in its last four games after opening conference play with a win at Arizona. The Buffaloes need a good result Saturday at home against a struggling ASU team.

12th of the season, third of the weekend for @McKeownTara! #FightOn | #FocUSed pic.twitter.com/sUgBI36fJh

The Cardinal continue to cruise through Pac-12 play, posting a 7-0 goal differential in road wins over Oregon State and Oregon. Stanford has not conceded a goal in four straight games and has outscored its conference opponents, 19-2.

If the Cardinal can beat UCLA at home this weekend, going 11-0 in conference play is a real possibility, if not likely.

Stanford and USC are clearly the two best teams in the Pac-12 at this point, but the parity of the conference is striking, as Oregon is the only squad with a losing record.