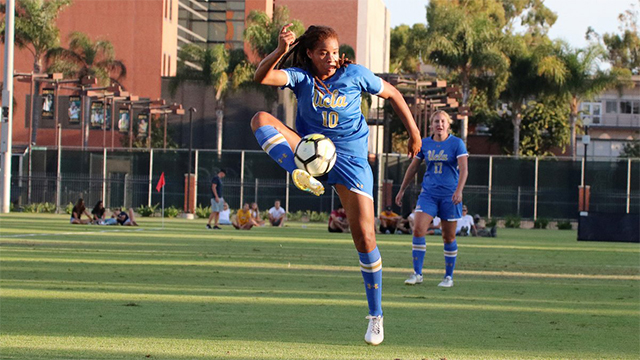 The first week of Pac-12 soccer is in the books. Here is how each team opened the 2019 season.

The junior scored from distance on an assist from Canadian national teamer Jessie Fleming against Iowa State, then set up Rachel Lowe for her first career goal by centering a left-footed cross to the freshman, who masterfully tapped it in from close range.

It was a big weekend for another newcomer too: Mia Fishel, who found the back of the net in both matches. The former San Diego Surf star knocked in a late header to cap the 3-0 win vs. Iowa State, then was responsible for the lone goal in the 1-0 triumph over Long Beach State, one-timing a free kick from Sanchez.

The Bruins have a colossal homestand this weekend when they welcome defending national champion Florida State and Florida. The FSU match will take place at Banc of California Stadium, the home of Los Angeles FC.

Junior Tara McKeown had two goals and an assist on the trip. Penelope Hocking continued where she left off last season by knocking in a cross just nine minutes into the Hawaii match.

She also played a ball behind the defense against USF that McKeown ran onto before evading the keeper to set up an easy finish.

Reigning Pac-12 Goalkeeper of the Year Kaylie Collins saved a penalty kick against Hawaii, and now has 19 career clean sheets.

Like UCLA, USC hosts Florida and Florida State this weekend.

Stanford knocks off No. 6 Penn State, No. 11 West Virginia

What else can be said about Catarina Macario? The 2018 MAC Hermann Trophy and TopDrawerSoccer.com Player of the Year winner scored both goals in a massive 2-1 road victory over No. 6 Penn State on Friday.

On one of them, she somehow cleared space among a horde of Penn State defenders before chipping the goalkeeper.

But Stanford is far from a one-woman show, as it displayed two days later when it used a total team effort to handle No. 11 West Virginia, 3-1. Five different Cardinal players recorded a point, with Carly Malatskey, Sierra Enge, and Madison Haley serving as the goalscoring trio.

For the weekend, Stanford outshot Penn State and West Virginia, 30-13. Already armed with two wins over top-15 teams, the Cardinal can stake a claim as the No. 1 team in the country.

With both of Stanford's goals in Friday's 2-1 win at #6 Penn State, @catarinamacario moves into 10th place in program history with 33 career goals in 45 appearances on The Farm. 📈

Cal hung five goals on Weber State on Thursday, its most since 2015. Four different Bears scored within the first 31 minutes of the match. Junior Luca Deza completed a brace in the 53rd minute by netting her second of two screamers from distance.

The Bears used three different goalkeepers, with highly-touted freshman Angelina Anderson earning the start and playing the most minutes (50). It didn’t matter who they trotted out there, though, because they only conceded three shots, none of which were on frame.

Cal will look to carry that momentum into Southern California this weekend where it will face UC Santa Barbara and San Diego State.

Would you Luca at that! 👀 @CleverleyDaisy to Luca Deza for our first goal of 2019!👌🎯 pic.twitter.com/eKt35jx8SU

It’s no secret Colorado will be led by its seniors this year, and Thursday that experience was evident when Taylor Kornieck and Stephanie Zuniga each set each other up for a goal in a 2-0 win over Drake, helping senior goalkeeper Jalen Tompkins become Colorado’s all-time wins leader.

Sunday, it was another senior, Kelsey Aaknes, who scored the game-winner in a 2-0 victory over Boston University. It was her 58th career game, but her first career goal.

To put the cherry on top, she connected with freshman Roo Yarnell-Williams for her first career goal to put the game out of reach early in the second half.

The Buffaloes host Kent State and Texas this week.

23' GOAAAAAAALLL!!! @kelseyaaknes finds the back of the net from outside the box!!

What was said about CU’s seniors is also true of Arizona State’s sophomores. The Sun Devils combined for 11 goals in a pair of wins over Cal State Fullerton and Central Arkansas, and six of them were netted by second-year players.

ASU should be able to continue its high-scoring ways this weekend when it hosts Tennessee Tech and Weber State.

Hey @espn we know football starts this weekend, but Marleen Schimmer got the fútbol season started with a BANG last night! Check out the #SCTop10 worthy strike 👇 pic.twitter.com/VSb0dzy3Ni

Oregon State kicks off Kagan era with a bang

The Matt Kagan era started on a high note, with Oregon State handling Portland State 3-0 on the road Saturday. It was the Beavers’ highest scoring output since 2015, and it snapped a seven-game losing streak and scoring drought dating back to Oct. 4 of last season.

Oregon State outshot the Vikings 29-0, and six different Beavers contributed a goal or assist. Even more promising for OSU’s future is that all three goals were scored by underclassmen.

Freshman Abby Schwartz was responsible for the Beavers’ first goal. Sophomores McKenzie Weinert and Sydney Studer accounted for the other two.

Oregon State will face a stiffer test this weekend when it hosts Villanova and Saint Mary's (CA), only needing one more victory to match its 2018 win total.

As we wait for the second half to start, take a look at the three goals OSU has scored already!

The Utes deserve some credit for heading east to play Clemson and Alabama, but it turned out to be a rough voyage as they lost 2-0 to the Tigers and 3-0 to the Crimson Tide after enduring a lengthy lightning delay.

Utah was limited to 13 shots on the road trip, not doing much to inspire confidence that it will be able to replace departed playmakers Hailey Skolmoski and Paola Van der Veen.

The Utes return to Salt Lake City to host Utah State and Cal Poly this weekend, probably needing to beat both since three straight road games— at BYU, Boise State, and Nevada—immediately follow.

Washington State can score, but it remains to be seen how well it can defend after losing a couple key starters on its backline.

So far, so good. The Cougars held Seattle to just three shots in Thursday’s road 4-0 win.

There were a couple of feel-good stories in this one. Sixth-year goalkeeper Ella Dederick recorded a save and a clean sheet in her first appearance since suffering a season-ending knee injury last September.

Meanwhile, new left back Brianna Alger, a converted forward, lofted two beautiful balls into the box that were headed in by juniors Hanna Goff and Elyse Bennett. It was Goff’s first career tally.

The Cougars host Montana and James Madison next weekend. WSU has not dropped a non-conference regular season match since Aug. 27, 2017.

Sophomore Jordan Wormdahl appears ready to break out for a young Oregon team.

The Eugene native scored her first two career goals Thursday at Fresno State, netting one from distance and another on a header. Unfortunately for the Ducks, they knocked in an own goal in the 88th minute and had to settle for a 2-2 draw.

Wormdahl was bumped into the starting lineup Sunday and scored another goal from distance, but Oregon was dropped by Santa Clara 4-1, despite outshooting the Broncos 13-12.

The Ducks have won just one road game since the start of the 2017 season. Up next is a homestand against Portland State and Villanova, who picked up a big win against LSU last week.

Washington outshot Portland 19-5, but could not find the back of the net in a scoreless draw in Seattle. UW sophomore Ruby Hellstrom fired six shots, setting a new career high. Half were on goal.

The Huskies have a major opportunity at home this week when they host North Carolina and New Mexico after a Monday match against Seattle. Dispatching the Tar Heels would be a signature win for head coach Lesle Gallimore in her last go-around.

Lightning forced Arizona to cancel its opener against reigning Big West champion Long Beach State, so the Wildcats will be opening their season this weekend against Weber State and Tennessee Tech.

Where, you ask? Sun Devil Soccer Stadium in Tempe. Awkward.

Ryan Kelapire is the editor-in-chief of AZDesertSwarm.com, the Arizona Wildcats SB Nation site. He has covered Pac-12 soccer since 2015 when he served as the Arizona beat writer for the Daily Wildcat, the University of Arizona student newspaper. You can find his Arizona soccer coverage here and follow him on Twitter at @RKelapire. He will be covering women's Pac-12 soccer this season here at TopDrawerSoccer.com.