Yesterday and today, we’re discussing some additional thing to watch for in this year’s women’s college soccer season. Part 2 of 2. Be sure to read Part 1.

6. Cheer Oh Cheer? The Notre Dame Fighting Irish won it all two seasons ago, but bowed out in the opening round of the tournament last year to end a 10-8-3 campaign. The team has a lot of talent returning and some very good incoming players, so it will be on head coach Randy Waldrum to make it all click. That last part should be a reassuring thing for fans in South Bend. Expect a return to  the upper echelon for the Irish. 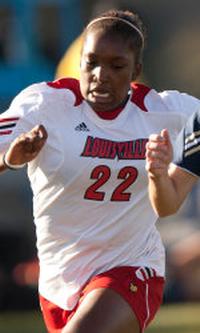 7. Signs of Turnaround: Pepperdine, Louisville, Alabama, Miami (FL): The upward mobility that is part of the present competitive climate in the women’s game. The challenge for these programs now is to keep the momentum going, particularly as the opposition will be more aware of their dangerous qualities now, and that there are other programs in each of their conferences, such as St. Marys, Cincinnati, Missouri and Clemson who are preparing to make similar kinds of runs in 2012. Achtung Baby!

8. The Game Can Be Beautiful: Last year I began to see some small but promising signs of teams who were willing to play a more attractive brand of soccer, reemphasizing technical quality, and tactical sophistication that can be great to watch. I know teams can’t just unilaterally ignore the physical game or they will get run through, but at least trying to keep the ball on the deck and knock it around a little can give the opposition something more to think about than whom are they going to smash in the mouth next. My personal heroes in this vein are the ladies at Boston University. Nancy Feldman and her staff seem to have a knack for getting the Terriers to do it right. This team is great to watch play. And small conference or not, BU is getting closer and closer to breaking into a much more prominent scene in the women’s game. Keep your eyes out for the teams who keep it on the ground.  They’ll thank you for it.

9. Is It Just Us, Or do hard and cynical fouls in the women’s game tend to be overlooked quite a bit more by officials? My interest here isn’t so much about equality but to reward skill and discourage cynical play. Teams that get outworked with a good series of passes or beaten via excellent technical speed, shouldn’t have the recourse of just chopping their opponents down. Too many times I saw this tactic employed last year without a yellow or red card given (happens all the time in club play too). Let’s enforce this law by the letter and I think we’ll find the women’s game can be even more entertaining to watch.

10. I Say it Every Year, but, I would still like to get a uniform policy on substitution in college soccer. At the very least could we make it the same for the second half as the first?  Currently a player cannot re-enter the field in the first half but is allowed to re-enter once in the second half. Eliminating that re-entry provision would greatly improve the quality of the game. I heard another approach last December at the College Cup from Wake Forest coach Tony Da Luz. He suggested a set number of substitutions allowed each team during the game, regardless of who it is coming in or going out or how many times per player (I think his number might have been something like a dozen but I can’t recall).