Oley is a small, quaint town replete with parents, teen-agers, and younger kids congregating at the local high school for a night of PDL play.  Travel tip: across route 73, partake in a slice of pizza with sausage - $3.15, well worth it.  Large slice with piles of sausage with a crispy crust.

I was surprised with the quality of the high school facility field-turf pitch.  When I played in high school, the fields were clumps of grass with mostly sand and clay.  However, problems with the scoreboard clock persisted for much of the game.

Even with a scoreless first half, the attacking play foreshadowed the 5-goal 2nd half explosion.  The play from both teams was lacking in cohesion for much of the game.

While Ocean City had chances – especially in the waning minutes of the game – but they weren’t able to get many highly quality opportunities and from those limited chances most were wasted.  The forwards were not connected with the defense leaving large gaps in the middle.

The lone goal was scored by Jack Bailey (Limestone D2) in the 69th minute.  The play started with Byron Carmichael taking a shot that Brian Holt (Creighton) was able to get low to stop the goal-bound shot. Bailey was able to gather the rebound however, and shoot from 8 yards between the numerous defenders trying to block the shot. 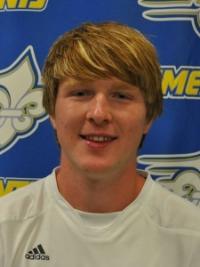 Jack Bailey
Bailey runs hard, but is primarily out of control and he can be neutralized by quick, unanticipated movements.  In the first half, Jidell Roach (La Salle(m)) sent a long pass that Reading’s David Rodriguez (North Carolina(m)) misplayed.  Bailey was able to get behind the defense, closing on the goalkeeper, Holt, but Brian Forgue (Penn State) was able to close on Bailey from behind – ending the attack. Bailey dribbled the ball out of bounds in the 36th minute.

Terry Gibbs (Bloomfield D2) is extremely technical with slick footwork.  He is quick but had the strength to shed big David Rodriguez off the ball in the 8th minute.  Gibbs ensuing shot was from an acute angle that was off-target. In the 37th minute, Gibbs breaking through to the goalkeeper was tripped just outside the box earning a dangerous free-kick.  He has talent and he is worth watching a little closer at future games.

Giovanni Tacconelli (Iona College) hits an accurate free-kick like the one that Gibbs earned in the 37th minute.  Tacconelli found Jeff Pio (La Salle(m)) wide open in the middle of the goal mouth, 6 yards from goal, but Pio’s header was over the cross-bar.  Tacconelli made a few long dribbling forays deep into Reading’s defense.  Tacconelli needs to hold the ball better – Christian Barreiro dispossessed him in the 2nd half.

Kevin Curran (Loyola (MD)) had a difficult time trying to neutralize Reading’s Brian Span (Virginia).  Late in the second half, Curran’s technical skill deserted him with consecutive poor touches.  Specifically, his thigh trap was mis-timed with the ball not coming softly down, but embarrassingly up in the air to be taken from Ocean City’s possession.

In the second half, Junior Chapman (La Salle(m)) switched to the left side to try and slow Span down with mixed results.  I’m not sure why it took 45 minutes with the carnage exhibited directly in front of the Ocean City bench.

Mark Leslie (Limestone D2) and Kevin Strunk (Lehigh) are not fleet. Strunk almost scored an own-goal in the 15th minute from a Brian Ownby (Virginia) cross.

Byron Carmichael was a boost to the attack when he came off the bench in the second half.

Reading scored 4 goals. The difference between the halves was that Reading possessed the ball better in the second half.   The Virginia trio (Span, Ownby, Bates) jump-started the attack, but I was disappointed that they weren’t more in sync moving the ball than I’ve seen in the past.  It’s a matter of quickness and precision on ball movement that I found lacking.  Nevertheless, they were the best players on the field for either team.

The first goal was scored in the 47th minute by Will Bates (Virginia).  The play started with a deflection from Brian Ownby’s low pass that Bates calmly hooked just inside the far post from 18 yards. 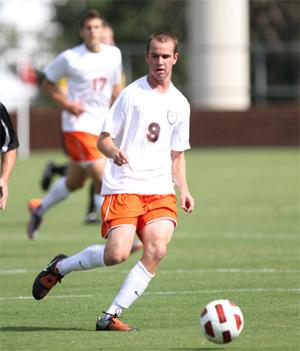 Brian Ownby
Ownby got on the scoreboard in the 60th minute.  The hard work was done by Shane Malcolm (High Point) dribbling past 3 Ocean City defenders, but appeared to have lost possession near the end line.  Controversially, he apparently pushed Kevin Strunk in the back and off the ball.  He crossed the ball to Ownby who touched it in from 5 yards. Strunk went bananas and lost his focus for the majority of the game.  From the comfort of the midfield bleachers, it looked like a push to me – but for some reason – I’m not provided a whistle to promptly provide my input.

The dagger was planted 4 minutes later when a Christian Barreiro (Penn) corner kick was deflected from the front post to the back post for Bates’ second goal of the game.

The fourth goal was scored by Stephen Okai (Mobile NAIA) in the 80th minute.  With a slick touch by Steven Neumann (Georgetown), Okai was provided a scoring opportunity that he buried into the far upper corner.

Span repeats the same thing – feint left, power the ball with the outside of his right foot, accelerate to the ball, get around the corner, cross the ball. It’s very effective.  I was absolutely shocked when Span actually used his left foot in the second half to lose his mark and powered a 25 yard shot that was a goal but for a goalkeeper tip over the cross-bar.  While Span is a remarkable athlete with good skill, he’ll be more effective if he can add more precise dribbling and improving on his crossing.

While Bates and Ownby’s passing wasn’t precise enough in the first half, they started connecting better in the second.  Ownby’s speed caused trouble for Ocean City.  I liked how he cycled back further to provide midfield support in the second half to ensure that the game didn’t slip away.

Bates had a few looks in the first half, but he wasn’t able to get the ball off his foot quickly enough.  In the second half, he scored 2 well-deserved goals.  In the 17th minute, he beat Junior Chapman and then Giovanni Tacconelli on the dribble to get into the box, but lost possession right afterward. In the second half, he was cut down by the goalkeeper, but the penalty kick wasn’t awarded because Lasse Sohrweide (Anderson College D2) recovered the loose ball and took a shot that was blocked off the line.

Sohrweide is a cultured passer with a sound left foot, but his vision is hampered with his propensity to keep his head down.

Christian Barreiro is a good ball handler and serves dangerous corner kicks.  But, he needs to get stronger and play less softly than he did against Ocean City.  I like his passing ability.

My biggest disappointment was that Matt Hedges (North Carolina) was a late scratch with Matt Baker taking his place in the starting line-up.

Baker and Brian Forgue (Penn State) were comfortable playing the ball between themselves.  The defense had too many long clearances (panic?) rather than working the ball forward, consistently.

Chris Harmon (Old Dominion) didn’t press his will and skill in creating good opportunities.  He seemed more tentative than I’ve seen him in the past.

Stephen Okai (Mobile NAIA) moves around the field exceptionally.  He’s key in shutting down attacks in midfield.  He sits back and explodes to the ball.  Okai has very good technical skill.  He’s a player that deserves another look. His body reminds me of Michael Essien.

David Rodriguez (UNC) made some basic ball handling mistakes.  He’s a big body in the middle, but doesn’t provide much initiating the attack.

I didn’t think it was possible, but Brian Holt (Creighton) may have shrunk – as he seems to be smaller than when I saw him play at Creighton in the fall.  He’s a good shot stopper, but he’s extremely limited to cover the upper corners – though he wasn’t punished in this game.

Overall, Reading United AC is one of the best PDL teams that I’ve seen to date.  They have some serious talent, but at this point aren’t playing to their full potential. If they hope to make a long run in the US Open Cup, the team will need continue to improve.

Bonus coverage:  For those that get the BYU channel, they televise 7 PDL games this summer.  Here’s a link.  On Friday, BYU was humbled 3-0 by the Fresno Fuego in the first televised game of the season.  Fuego’s Gustavo Silva (Fresno-Pacific) scored in the first 10 seconds of the game.  Silva is a big body with quick feet and satisfactory speed.

The second goal was scored on a Gaston Cignetti free-kick with tremendous placement over the wall into the upper corner.

The last goal was scored by Cal-Poly Alumnae Tyler Reinhart with a classy first touch eluding the defense before calmly slotting the ball into the goal.
Headlines
College Rankings HQ
View all rankings >>