After spending the last seven years coaching college players, Porter has seen his share of former charges make it at the MLS level. 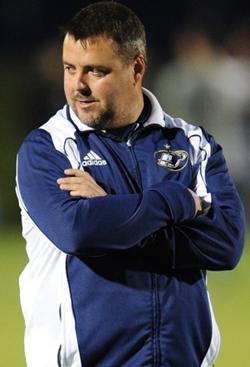 Before the opening whistle, however, that’s not what he is fixated on – it’s whether or not he can guide the Timbers to three points on that particular day.

“I really can’t be bothered who I’m playing against in terms of whether I have an association or not,” he said. “I have respect for those guys, but when you’re on the other side playing against another team, you want to win. And probably when you know guys you want to win even more. But then after the game we’ve shared a chat, obviously wish those guys all the best unless they play the Timbers.”

To no surprise, a few of his former Akron stars are also on the Timbers roster as well. Forward Darlington Nagbe was the team’s first round draft pick in 2011, the club’s expansion season, and was already on the roster when Porter signed on for the head-coaching gig.

But he’s since brought in new additions like Michael Nanchoff and Ben Zemanski, and the team drafted goalkeeper David Meves in this year’s Supplemental Draft, though the ‘keeper ended up on the Timbers U23 squad and Nanchoff was recently sent on loan to Swedish second-division side Jönköpings Södra IF.

The chance to once again coach a few of these standouts has been a fun part of the transition.

“When the guys left me at Akron I was very happy for them, proud of them, but you’re a bit sad because you’re not going to get to coach them again,” he said. “To get the opportunity now to coach some of these guys again, it’s enjoyable, because you do have a relationship with them at a deep level.”

The familiarity doesn’t just stop with players he coached in college, but also players he coached against while with the Zips. Thirteen seasons in the college ranks (six of them as an assistant at Indiana) gives him a strong starting point when taking a look at future MLS opponents.

“Through IU and my time at Akron, and playing other college soccer players and coaching a lot of guys on those teams, it’s amazing how many players I know in the league,” he said. “So when I do a scouting report, typically half the team I’ve seen in college, recruited or coached.”

And as far as the adjustment of coaching college players versus coaching pros, it’s something Porter’s come to relish.

“It’s been really enjoyable, stimulating and to be honest. It’s been comfortable,” he said. “In some ways I feel more comfortable managing men, than I do managing boys. I like the teaching, mentoring aspect of the college-level kid, but it got to a point for me after seven years where it was time for me to lead men, because you start to get impatient and tired of the little things that you need to sometimes tell college guys that I don’t have to tell professionals, because they are professionals.”

The experience with the U.S. U23 team helped Porter feel like it was time to move on, to challenge himself at the next level in an effort to grow more as a coach. After his eventual departure, there was little question that whoever came in would have big shoes to fill in Akron.

Porter thinks that they found the perfect fit in Jared Embick, his right-hand man at the school the last six seasons who was named head coach shortly after Porter’s official departure.

“Jared deserves a lot of credit for the evolution of the Akron soccer program and the building of the program to the level of where it’s at,” Porter said. “There’s no question he was the right man for the job because he knew our blueprint, knew our philosophy. He was a part of that philosophy and there’s no one out there that’s better to execute the philosophy than the guy that was with me, assisting in the execution of it for six years.”

Embick is no stranger to a head coaching role – he guided NAIA program Missouri Baptist University(m) prior to taking his spot alongside Porter – and his former boss has high hopes for what Embick will be able to accomplish.

“Like anything, it’s going to be a transition for him to go into the head coaching role of that level program, but he deserved the opportunity and there’s no one more capable to carry on the tradition of Akron soccer and the brand that we had developed there,” Porter said. “He’s going to do a great job. I learned a lot from Jared and owe him a lot as well. He did a lot to help me and the program.”

And for all the tactical recognition that Porter gets, a lot of those same philosophies and approaches are there with Embick that will help the program continue its high standards and familiar style of play.

“The thing about Jared is that he’s tactically innovative and he’s brave. He’s not scared to try things, and I think that’s half the battle,” Porter said. “He’s not going to have his guys taking the field [feeling] inferior. Within that, it’s important to get talent in, but while everyone always talked about how much talent we had, a lot of the time the guys were under the radar. Scotty Caldwell was under the radar, Michael Nanchoff was under the radar. In the end of it, perceived as being very talented, but it was because of the development and the philosophy and the training and all that which helped them into the player they were. We had talent, but it’s about the team at Akron. The individual players and how talented they are is important but not as important as the way that they play at Akron.”

Only time will tell if Akron can continue that winning tradition Porter implemented at the Ohio program, or if the new head coach can continue to build off an impressive start to his pro coaching career.

But one thing is for certain – Porter is thankful to have been given this chance to make the jump from the college to pro ranks, an opportunity that isn’t quite as common for head coaches as it is for players.

“The fact that I get the chance to for a living, coaching professional players, is a real honor and a blessing,” he said. “I think I’m very fortunate. There’s not been many college coaches that have had this opportunity. I’m real fortunate.”