Outside of their in state counterparts, is there a hotter team in the country than Virginia Tech?

The Hokies remained in the race for the ACC crown and crashed the top 10 of the TopDrawerSoccer.com National Rankings with a big win, moving up to No. 6 in the rankings. 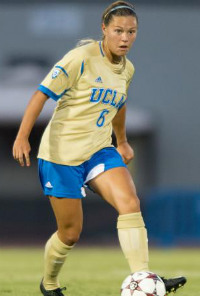 On Sunday, the Hokies returned to the field for the first time in ten days to host Notre Dame. The Irish entered the match on the heels of a 3-2 double overtime loss to Virginia on Thursday and battled hard, but the Hokies picked up the winner thanks to Ellie Zoepfl in the 87th minute.

That was far from the only upset of the weekend, as Top 25 teams fell left and right. Stanford, after dropping a loss to UCLA on Thursday, lost against USC by a 1-0 score on Sunday.

Georgetown lost its first game of the season in big fashion, dropping a Big East conference matchup to Marquette, 4-0. Golden Eagles midfielder Maegan Kelly helped pave the way with a goal and an assist.

It was a massive Big Ten win for No. 15 Michigan, which traveled to State College, Pa. and defeated the Nittany Lions 1-0. Tori McCombs provided the winning tally in the second half, while Wolverines goalkeeper Taylor Bucklin made seven saves to preserve the shutout.

While upsets rocked top 25 teams, the top four teams emerged unscathed. The Cavaliers extended their winning streak to 14, winning dramatically against the Irish, and following that up with a 2-0 defeat of Wake Forest on Sunday.

After No. 2 UCLA got the proverbial monkey off its back on Thursday night, beating Stanford 2-1 in overtime, on a long distance goal from Lauren Kaskie, they dealt California its first loss of the season 1-0.

No. 3 Florida State hung on to its unbeaten record, notching wins against ACC opponents Syracuse (winning 1-0 in overtime) and Pitssburgh(w) (rolling to a 4-0 victory).

No. 4 North Carolina defeated in state rivals NC State 3-0 on Thursday, then hopped on a plane to pay a visit to Boston College on Sunday. The Tar Heels picked up a 1-0 win thanks to a 65th minute goal from Kelly McFarland.

Entering the rankings this week was Marquette (No. 24) and Mississippi (No. 25).

Check out this week’s rankings.