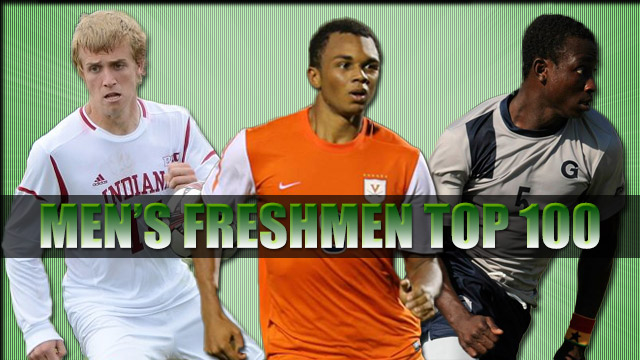 Having lost a handful of talent from last year’s side that finished as national runners up, the Georgetown men’s soccer program turned to a promising incoming class for a new starting center back in 2013.

Enter Joshua Yaro, a Ghanaian who moved to the United States in 2009. Upon enrollment on the Hilltop this fall, Yaro seized control of a starting center back spot, playing every minute up until he suffered a broken arm last week. Despite a recent injury (he’s expected to return to the field soon with a cast after breaking his arm), his play through the first half of the 2013 season has earned him the No.1 spot in the TopDrawerSoccer.com Freshman Top 100.

An exceptional athlete with tremendous speed, Yaro has assumed the mantle from last year’s senior captain Tommy Mueller, and looks to have the tools to one day play in the professional ranks. He’s far from the only first-year talent with pro potential to dot the top 10.

Unheralded CAA program Delaware is making noise in the national polls, and a lot of that is down to the goal-scoring ability of second-ranked Guillermo Delgado. A Spanish forward with 10 goals in his first 11 college games in the United States, Delgado is part of a Blue Hen international contingent flourishing at the DI level.

Other familiar names from the USSF Development Academy landed in the top 10. Virginia forward Jordan Allen has transitioned well to the ACC, while Indiana attacker Tommy Thompson has been one of the bright spots in a tough season for the Hoosiers, and one can expect No. 8 ranked Jordan Morris from Stanford to challenge for the No. 1 rank after the season runs its course.

Like Delgado, international players have made the move to the college game with great success this year. Canada in particular has supplied a number of promising players so far, including Syracuse pair Alex Hallis and Chris Nanco, Mark Wadid (Penn State), Brody Huitema (Duke), Sergio Camargo (Coastal Carolina), Cyle Larin and Kwame Awuah (both at Connecticut).