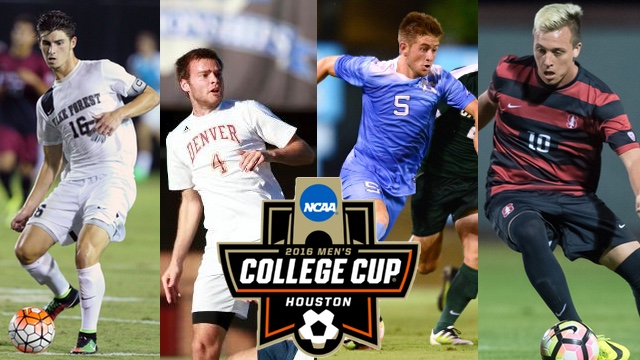 As far as showcases for the men’s college game are concerned, we’re about to hit the motherlode.

The Men’s College Cup is nearly here. The tourney kicks off Friday at BBVA Compass Stadium in Houston with Denver-Wake Forest and North Carolina-Stanford dueling in the semifinals. Winners advance to Sunday’s championship, and the talking points are rampant. An assistant faces his former boss who happens to be coaching his alma mater. A program goes after the first back-to-back DI men’s titles in more than a decade. It’s all happening.

In addition to its utility as an individual showcase for pro-ready talent, the College Cup’s increasing relevance beyond as a service to the next level is a testament to the rising level of the nation’s top programs. College soccer may lack depth, but each of the four programs on display in Houston this weekend testify to its quality at the top.

Here’s a look at each of the two matchups we’ll see on Friday. In terms of talking points, this is perhaps the richest College Cup we’ve ever seen. Strap in.

Set aside whatever happens on the field for a moment and focus on the sidelines. From that standpoint, this matchup is irresistible.

For three years, Jamie Franks served under then-Denver head coach Bobby Muuss as one of his most beguiling assistants. Before that, Franks had been a player at Wake Forest, and his time overlapped with Muuss’ when the latter was an assistant there. Once Muuss took over the head job at Denver, Franks as an assistant was a no-brainer.

The intertwined relationship between the two didn’t stop there. Muuss left for the head job at Wake Forest for the 2015 season, leaving Franks with the head position at Denver. Both men, now head coaches in their own right, turned their respective programs into powers, culminating in what should be one of the most intriguing tactical battles in the history of the College Cup. Considering Muuss personally recruited a huge chunk of Denver’s roster, and considering Franks has a personally vested interest in knowing Wake Forest’s, this game could look like shadowboxing.

For neutral observers, that’s either a very good thing or a very bad thing. Either this game opens up and turns into a coordinated dance worth seeing, or it clams up and both coaches, so intimately familiar with one another, simply nullify each other until a scoreless game dips into penalties. Which match we get is unclear.

If it’s a high-scoring affair, that clearly benefits Wake Forest. The Demon Deacons have the edge in talent in the midfield and up top, and Ian Harkes, Wake’s midfield metronome, should be able to put the clamps on the game’s flow. Fresh off a two-goal performance in the Elite 8, Ghanian sensation Ema Twumasi is on fire right now, and with Jacori Hayes jumping through tackles in the midfield Denver has a lot of defensive work to do.

The good news for the Pioneers is that they’ve rested on their magnificent defense all season. At some point in the next 12 months, it wouldn’t be a surprise to see center back Kortne Ford and right back Reagan Dunk both on MLS rosters. Combined with a swarming midfield, Denver should be able to counter most of Wake’s parries with quick jabs on breaks. Wake will have possession. The question is whether Denver lets them do anything with it.

That said, this match actually pits the two best defenses in the country against one another. Furthering the notion that Muuss and Franks spent time in the coaching incubator together, Wake is just as strong defensively as Denver. In fact, both teams are tied in goals against average with 0.46. Nobody in the country is better.

At least if you went by the theoretical lines set by Vegas, neither Stanford nor North Carolina were odds-on favorites to get here. Stanford had a fire-hardened road here, littered with deceptively difficult opponents along the way. Excellent newcomer Pacific, 2014 national champ Virginia and Louisville, the highest seed in the quarter. Stanford was better than every one, beating the odds to get back to a second consecutive College Cup.

North Carolina’s path up the mountain was even craggier. Sure, No. 1 Maryland might’ve been knocked out in the upset of the century by Providence. But the Tar Heels still had to maneuver past the nation’s highest-scoring offense in Florida Gulf Coast(m) (which they did), a 2015 College Cup team in Syracuse (which they did) and that possible Friars team of destiny in the Elite 8 (which, again, they did). In terms of roads to the finals, nobody had it tougher than North Carolina.

And in terms of matchups, this one is a murky tactical soup.

Under coach Jeremy Gunn, who’s probably the best in the college game right now at maximizing his talent in the tourney, this 2016 Stanford side is a buttoned up three-piece suit. The Cardinal aren’t flashy, and they don’t play a style reminiscent of the game’s tactical finery, but it’s a cohesive tactical unit that plays as one. As much as Jordan Morris convinced everyone this was a swashbuckling side a year ago, Stanford is overtly practical. Which makes them incredibly dangerous this time of year.

North Carolina, on the other hand, is a bit more idealistic. Or at least it has been, mostly because it can afford to be. Nobody in the country has a player quite like Cameron Lindley, a freshman midfielder capable of picking even the most elaborate of defensive locks. Lindley is subtle, preferring to flit around the edges of things and biding his time before stepping into a pass that cuts a back line in half. The Tar Heels have a chunk of slab granite up top in Tucker Hume, too, a pure No. 9 who’s a wrecking ball in the box.

Point is, North Carolina and Stanford are both liquid tactically. They can play different styles based on game states, which makes this one doubly hard to predict. North Carolina certainly looks like the stronger team on paper, and the chances they’ll control possession and largely dictate play are good. But nearly Stanford’s entire roster has played on this stage before. Nobody on that Tar Heels roster has.