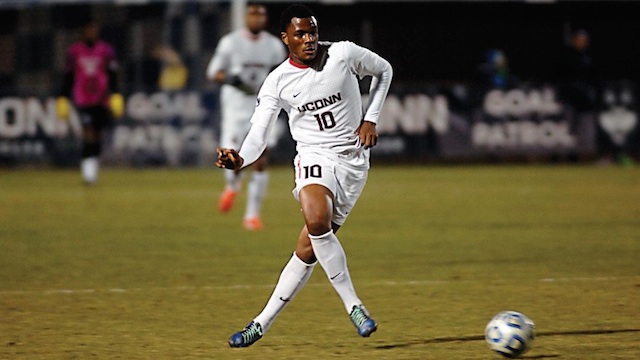 Including the conference tournament, Connecticut managed to lose just one conference game all last year and still managed to miss out on any hardware. Louisville, which fled to the ACC, nipped the Huskies by a point in the regular season and USF took the tourney title in penalties. Top keeper Andre Blake was off to MLS in the offseason, but enough returns that the Huskies will be heavy favorites this year. Keeping impact forward Cyle Larin another year was huge, and while players like George Fochive and Mamadou Doudou Diouf demand replacing, guys like Adria Beso and Sergio Campbell are still here. If anyone can bump off the Huskies in their hunt for a conference title denied them last year, it’d probably be a surprise.

The Knights were a mild surprise last season in that they only lost a single game in conference and earned a No. 3 seed to the conference tourney. As far as returners go, you need look no further than Jamaican super-striker Romario Williams, the conference’s brightest attacking player last year with 10 goals. Williams is back for his junior year but will need some help. With Omar Vallejo’s five goals gone, there are only six returning goals that didn’t come from Williams last year. Midfielder Fernando Laverde could be in for a breakout year.

The Owls were picked last in the 2013 preseason poll and proceeded to defy odds all year. After a 10-win season - three in conference play - Temple is dreaming bigger in 2014. Midfielder Jared Martinelli and defender Robert Sagel both landed on the all-conference second team, and their return is a boost in the middle. The Owls only surrendered 13 goals in 18 games last year, which meant their 21 goals scored wasn’t a problem. They’ll need a repeat performance to reach double digit wins again.

The Bulls weren’t bad in the regular season, but their run to the American Athletic conference tournament championship caught most by surprise. After a four-game winless stretch in the middle of the season, USF went 5-0-1 over its next six, which encapsulated a perfect run through the conference tourney. That got USF into the dance, where their experience should serve them well in 2014. The Bulls have to replace Ben Sweat and Samuel Hosseini, but all-rookie team forward Lindo Mfeka should have more of the spotlight. After their finish last year, USF, should be hoping for more of the same this season.

Life for Memphis this season is more or less Life After Sherrod. Forward Mark Sherrod was essentially part of the furniture at Memphis, where he set every scoring record in the book over his four seasons. His exodus to MLS marks a new era for the Tigers, who also have to replace midfield general Liam Collins. The emergence of freshman Raul Gonzalez in the midfield last season was a pleasant surprise, but they’ll need scoring production badly. Fakhry Khulfan will be a name to watch, considering the Tigers lost 12 goals and 16 assists between three players.

Last season was a lost year for SMU, a historically dominant program that hit a nasty three-win speed bump in 2013. The Mustangs were handed each of their first six losses by one goal until the wheels flew off late. The season ended with a 5-0 embarrassment against UConn in the conference tournament. The emergence of freshman Deshawon Nembhard in defense was good news, but replacing keeper Jaime Ibarra should be no easy task. This team is still overwhelmingly young, as 18 of the 28 players on the roster are underclassmen. SMU almost has to be better than three wins in 2014, but whether it can compete for more league titles is another story.

A 5-1 loss to Rutgers in the play-in round of the conference tournament last year meant the Bearcats had to suffer the indignity of being the only team in the league to not qualify for the quarterfinal round. That said, Cincinnati scrabbled together a three-game win streak last season that included a 2-0 win over Louisville, so the ability to improve in conference this season is there. A solid returning core including John Manga, Ben Keane and Ashani Walker should lead the Bearcats to more than one conference victory this year.

The AAC lost Rutgers and Louisville in the offseason, and its lone addition was former Conference USA member Tulsa, which brought the number of teams in conference back to eight. The Golden Hurricane were a win away from the NCAA tournament last year but a 1-0 loss to UNC Charlotte in the CUSA title game ended the season early. Tulsa should compete immediately with eight starters back, including standout senior Jamaican striker Akeil Barrett, who has 14 and 12 assists in his career.