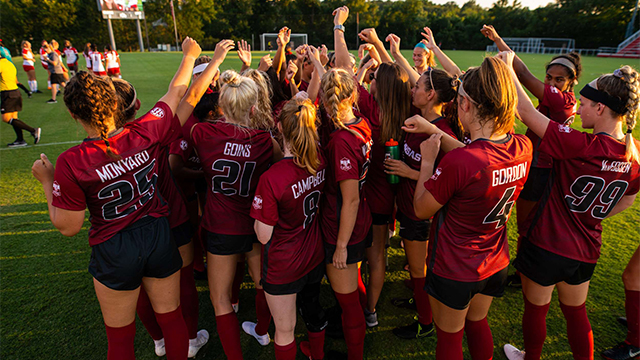 A truncated Southeastern Conference season begins this weekend, as each team will look to navigate the COVID-19 pandemic and play an eight-game, conference-only schedule. Games are set to begin on September 18.

An SEC Championship is scheduled for November 13-22 in Orange Beach, Alabama, with all 14 teams in the conference qualifying.

Last year’s regular season champions, there’s a lot of returning pieces that should help Arkansas through the eight-game schedule. It starts with Haley VanFossen, who anchors the team at the back, and Anna Podojil up front. However, with a class of eight seniors that includes Kayla McKeon, Taylor Malham, VanFossen and Parker Goins, Arkansas is certainly one of the favorites for the short season. Don't be surprised to see another excellent campaign from Colby Hale's squad.

How to replace an all-time program great? That’s the conundrum for the Gamecocks after the graduation of Mikayla Krzeczowski in goal. Grace Fisk has also moved on after anchoring the team’s back line. Given South Carolina’s emphasis on defense, they’ll look to Taylor Fox, Heather Hinz or Anne Lorio as one of the replacements in net. Catherine Barry’s introduction to SEC soccer will be interesting given her strike record in club and high school soccer. She could be one of the most exciting freshmen to watch in 2020.

Talent, depth and experience is back for the Aggies, although talismanic striker Ally Watt graduated. When it comes to creating chances, all eyes will be on Jimena Lopez once again, as she motors up and down the left flank. Provided that they find goals from somewhere, whether it’s freshman forward Andersen Williams or a returning player like Tera Ziemer or Addie McCain, coach G Guerreri should have an extremely competitive group once again.

Head coach Darren Ambrose has turned the Commodores into a consistent force in the SEC, and it is a trend that the team will look to continue in the fall. Haley Hopkins enters her senior year, looking to make one more splash and boost her professional chances. A 10-player class of seniors that were at the heart of the program’s success over the past few years will look to lead them through the shortened season.

Parker Roberts is back for her final season of eligibility, and will look to anchor Florida’s hopes of continuing to improve in 2020. Keeping Deanne Rose healthy and on the field is a key to that; Ansley Frazier, who transferred in from Massachusetts, enjoyed a stellar freshman season in 2019 and will look to raise her game to another level with a return to her home state. Between Rose, Frazier and Cassidy Lindley, the team should offer plenty going forward.

The fall of 2020 is head coach Billy Lesesne’s sixth season in charge of the Bulldogs, where he’s posted a record of 27-41-12 since taking over before the 2015 campaign. There were finally signs of improvement, finishing above .500 for the first time since 2014. A large chunk of last fall’s key contributors is back, including leading scorer Chloe Chapman, who tallied six times coming off the bench. Kayle Bruster returns after earning All-SEC First Team honors. A difficult test lies ahead, with opening games against South Carolina, Florida and Tennessee.

After fashioning a solid campaign last season, the Tide have the players to make an impact on the shortened season. Casey Wertz returns after leading the team in goals and assists. Riley Mattingly excelled as a sophomore, while Reyna Reyes earned All-Freshman Team honors a year ago. The schedule is a tricky one, with Tennessee, Florida and Arkansas the first three of four opponents they’ll face.

The attack was clicking for the Rebels’ last fall, which scored 33 goals in 20 games. With Channing Foster entering her senior season, that will be the strength once again. But the team did give up 27, giving them a clear priority on where to improve. Other key returnees include Mo O’Connor and Haleigh Stackpole.

Head coach James Armstrong enters his second season at the helm, and it was a relative success, helping the team back to the SEC tournament for the first time in 15 years. While every team will make it this year, the program has gaps to fill. MaKayla Waldner moved on after a 10-goal season, while the team’s

Longtime offensive stalwart Brianne Folds graduated, although her output in 2019 wasn’t quite what it had been. Improving a back line that conceded more goals than they scored last fall is a good starting point. Junior Hailey Whitaker is a candidate to help supplant that offense, while Sydney Richards earned All-Freshman SEC honors. With only three seniors on the roster, the Tigers will be a young team for this shortened season.

Like other programs, the Volunteers have several key roles to fill after losing players to graduation. But the building blocks are there for a strong season. Sophomore goalkeeper Lindsey Romig is one of the best young shot-stoppers in the nation, and the transfer additions of Hannah Tillett and Brooke Wilson give the team new attacking options. Injuries limited Erin Gilroy to just five appearances in 2019, so if she can stay healthy, that should only help the team in the final third.

Sian Hudson was tabbed as the new head coach at LSU, joining the Tigers from UC Colorado Springs, where she led the program to prominent success over her three seasons at the Division II program. LSU scored just 11 goals and conceded 40 last fall, leaving plenty of work ahead, and significant room for improvement. Midfielder Maddie Moreau was a bright spot, starting every game and earning All-Freshman Team honors from the SEC.

Head coach Ian Carry enters his fourth season at Kentucky with plenty to prove. Since taking over at the end of 2016, the program has a mark of 19-36-3 overall, but a 5-24-1 mark in conference play. Playing only SEC opponents this season will put those struggles front and center, and it will be interesting to see if they can buck those recent trends. 2019’s leading scorer Hannah Richardson is among the key returnees, as she scored eight goals – matched by fellow rising sophomore Jordyn Rhodes. If that sophomore duo can find some success in SEC play, look for an improved 2020 from the Wildcats.

Like LSU and Kentucky, Mizzou nabbed just a lone victory in conference play, a fact that comes under closer scrutiny within a short season against league opponents only. Program stalwart Sarah Luebbert graduated, but 2019’s top scorer Julissa Cisneros is back for her junior season. They did not get an easy schedule, it should be pointed out, playing Florida, South Carolina and Vanderbilt in the first three games of 2020.