Division II soccer officially arrives this weekend. Bundled in that package are the story lines surrounding the repeat bids of the Lynn men and West Florida women. While Lynn won its first title since 2003 last season, West Florida took home its first national championship in program history. A spate of challengers are lining up to claim the throne for themselves. While the Saginaw Valley State men return Division II Player of the Year Zach Myers, the UC San Diego women will attempt to avenge its loss in the final despite the loss of 10 seniors.

What follows are the top five men’s and women’s teams in the nation as chosen in NSCAA’s Division II preseason poll.

The Knights from Boca Raton, Fla. get the honor of the preseason No. 1 after winning the Division II National Championship last season. Lynn dropped Saginaw Valley State in a thrilling 3-2 final to cap a 20-2-1 season in grand style. It was the program's first national title since 2003 and washed out the taste of a loss in the final in 2011. 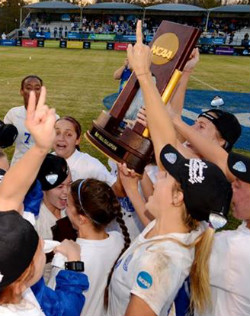 The Knights lost eight starters from last year, so Lynn has its work cut out if it hopes to repeat. Luckily, they have some encouraging pieces back with which to play. All-Americans Jason Sangha and Jack Winter will anchor the side, while Anthony Desperito, who captured the most outstanding offensive player honor from the title game, is also back.

The Cardinals made history last year by posting an 18-3-4 record and winning their first Great Lakes Intercollegiate Athletic Conference tourney title. That was only prelude to a thrilling run to the national title game and a narrow miss in a 3-2 loss to Lynn. The program's first ever trip to the championship game was enough to put Saginaw Valley State on the map for 2013 as a prime contender for a return to the big stage.

It all starts with Zach Myers, who was named the Division II National Player of the Year last season and returns for an anticipated encore for his senior campaign. He scored 17 goals last year, none bigger than the double-overtime winner against Northeastern State in the 110th minute to send the program to its first Final Four in history. The Cardinals scored an incredible 53 goals last year. Equalling that return could lead to a first ever title.

The Canadian-based Clan are building quite a niche for themselves north of the border. The British Columbia-based outfit went 19-2-1 last year and won its conference for the second straight season. Then, the Clan won the NCAA West Region and became the first international school to reach the semifinals of the NCAA DII tournament.

With 16 players returning, Simon Fraser hopes to throw that experience off the trampoline and go a game further in 2013. And the leftover talent on the roster puts them firmly in that discussion. Leading scorer and strapping 6-foot-4 target man Carlo Basso bagged 14 goals and seven assists last season, and leading provider Alex Rowley brings back his team-leading 10 assists for his sophomore year. Offensively, few teams in all of DII will be able to score with Simon Fraser. If they hold up at the back, they could become the first international DII title winner.

For the first time in 10 years, Mercyhurst streaked into the Final Four last year. The Lakers went 17-6-1, won their first ever PSAC title and finished off one of their best seasons in memory with a loss to the eventual champs in the national semis. Not a bad way to go.

A lot of production departed in the offseason. Alex Manea led the team with 16 goals and seven assists last year, but he's gone. So too is forward Austin Soloman and nails goalkeeper Diego Gustin, who posted an absurd 0.83 goals against average. The Lakers will be forced to lean on junior forward Fernando Martinez (seven goals, nine assists) and junior defender Ryan Lund. Mercyhurst turned to senior keeper Mikko Sarkkinen in the playoffs when Gustin was lost with an injury, and he went 4-1 between the pipes down the stretch. He'll be a team anchor as a fifth-year player.

The Rangers crashed onto the national scene last year in a big way with their best season in school history. They went 17-2-1, went a perfect 14-0-0 in the Rocky Mountain Athletic Conference and made the Sweet 16 for the first time in program history. Denver is holding it's breath for an encore after Regis set 10 single-season records in 2012.

The loss of forward Alex Tarnoczi will sting, but the bulk of the team's production returns. That includes breakout stud and Ireland native Martin Maybin, who scored 15 goals and had 10 assists as a sophomore, both of which led the team. Midfielder Logan Miller had nine goals and three assists last year, while Adam Tormoehlen had a balanced six goals and five assists.

The Argonauts had one of the most impressive finishes in all of college soccer last season, winning their last 13 games en route to their first ever national championship. After starting the 2012 season unranked, West Florida won't have to worry about flying under the radar this season after a 24-1-0 campaign.

The loss of midfielder Monica Malavassi will be felt, but all three of West Florida's most productive offensive players return. Chelsea Palmer was an unstoppable force in 2012 with 16 goals and 19 assists, and she can be deployed most anywhere in the attacking third. Meanwhile, Shelby Bush (15 goals, six assists) and Sashana Campbell (11 goals, seven assists) will now push for another first for West Florida - a second straight national title.

Over the past four years, Grand Valley State has left an unmistakable mark on DII women's soccer. The Lakers have pushed into the NCAA Final Four in each of the last four years, and last season's team looked to be a serious title challenger. But after a 20-2-1 year, they fell to UC San Diego in the semis.

Grand Valley State has five starters back from that team, four of whom are defenders. That should cement the Lakers' back line as the best in the country and the place from which they'll build. Kayla Kimble and Juane Odendaal are particular names of note at the back. Midfielder Charlie Socia and defender Tayler Ward will try and get the Lakers over the final hump and into the final two.

The Tritons went 17-3-4 last year and won a record eighth California Collegiate Athletic Association title. That was the prelude for a postseason run that ended with a 1-0 loss to West Florida in the championship game.

So why are the Tritons ranked below Grand Valley State, a team they beat in the NCAA semifinals last year? The graduation of 10 seniors could explain it. The loss of four key contributors (including Gabi Hernandez) means 20 goals walked out the door at season's end. UC San Diego is in luck, though, because All-American Cassie Callahan headlines a core of contributors coming back. Callahan had team-leading totals in goals (10) and assists (eight) last season. Izzu Pozurama and Kelcie Brodsky will also have a lot on their shoulders.

Saint Rose has been a juggernaut in the Northeast-10 for nearly a decade, and nothing changed on that front last season. The Golden Knights are 130-11-8 in their last six seasons, including a 20-3-2 record last year that led them to a seventh consecutive regular season league title. A fifth straight trip to the NCAA Final Four was the encore for another successful regular season.

Saint Rose might be the dark horse of the top five considering it returns a monstrous 10 starters. All-Americans Carmelina Pupolo and Sydney Boyd make Saint Rose go. Headed into her senior year, Puopolo has already set school records for goals (49), assists (41) and points (139). Boyd, a senior midfielder, is coming off a season in which she scored 13 goals and bagged 30 points.

After a 19-2-2 season last year, Armstrong will know where it stands right off the bat. The Pirates face No. 2 Grand Valley State and No. 1 West Florida in succession on Sept. 6 and 8, testing their No. 5 ranking with alarming immediacy. After a 19-win season, the Pirates feel like they're ready for the gauntlet.

The Pirates placed two on the All-Peach Belt Conference team in sophomore defender Taylor Russell and senior midfielder Andye Dawson, who had five goals and three assists a season ago. As a freshman, Russell anchored a defense that finished with a sterling 0.72 goals against average. After being picked second in its own conference behind Columbus State, the Pirates feel they have something to prove in 2013.