Cameron Thomas has been a standout performer in the USSF’s Development Academy for the past three plus seasons. The midfielder from Chargers SC is one of the most experienced players in the league with over 80 appearances to his name.

However, his youth club career will come to an end outside of the Development Academy.

Thomas was invited to play the second half of the Bundesliga season with VfL Osnabruck U19. 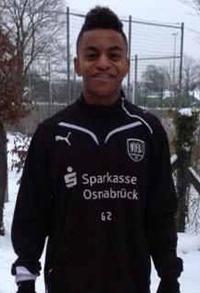 “The opportunity came up through a man named Steve Peer and Mark Dillion who have a contact with the club,” Thomas told TopDrawerSoccer.com. “I went over in the summer for 10 days with five other players, one from my club team. I played well those 10 days and I was invited back to play the second of the season with them, which last about six months.”

Thomas’ official debut with the club will come this weekend when VfL Osnabruck takes on FC Hansa Rostock on Sunday, but the teenager has already appeared in a couple of friendlies and started to adjust to the lifestyle change.

“The experience so far has been a lot different than in the U.S.,” Thomas said. “It’s much harder and faster here in the Bundesliga U19, and it is a higher level than the Academy.

“Tactics are a huge part in the game, but each day I feel more and more comfortable.”

Thomas is joining the squad that currently sits in fourth in the A-Jgd. BL Nord/Nordost division with a 5-7-3 record. The speedy midfielder’s likely debut will come against the third place team in Hansa Rostock, which is 8-1-5 on the season.

And while Thomas is pushing himself to become a better player with this experience, his plans for the future have not changed.

“I want to take this opportunity in Germany to improve as a player and a person to develop and become better. If I get invited back that would be awesome, and I would just have to look at my options. But USF(m) is my future plan right now as that’s the school I’ve always wanted to play soccer at, so I’m just taking this opportunity and making the best of it.”

Maki Tall, the Le Mans leading man, scored twice on Sunday in the French Championnat National U19 Group A finale. Tall added an assist for good measure in the 6-1 thrashing.

The Washington D.C.-born striker is now in camp with the France U18 Men’s National Team, which is his third call up of the over the last six months.

RJ Allen, a two-time All-American at Monmouth while playing primarily as a right back, signed with Skive IK, a team in the Danish second division.

Allen, who wrapped up his college career after the 2011 season, was selected in the 2012 Supplemental Draft by Chivas USA, and trained with the team through much of last year’s preseason.

He’s currently over in Demark training with the first team ahead of the start of the season in March.