Every year a handful or so college players, who are not seniors, enter the MLS SuperDraft. These players fall under the distinction of Generation adidas. Their contracts are guaranteed and do not count against the salary cap.

And while Generation adidas has taken a slight step back in recent years, there are still talented players in college who MLS clubs are monitoring.

With the midway point of the season already gone, TopDrawerSoccer.com takes a look at some of the candidates and assess their MLS readiness.

Mikey Lopez, North Carolina: The U.S. U20 midfielder is the real deal. Very good with the ball at his feet, covers plenty of ground, and can even crack a solid shot from distance, Lopez is an MLS-ready prospect who played a huge role in North Carolina’s title win last year. With the U20 MNT qualifying process next year, if Lopez makes the leap it’ll be big news for the

Eriq Zavaleta, Indiana: There are a lot of questions about Zavaleta, but most of them are off the field. The former U.S. U17 Men’s National Team defender has spent time with three MLS Academies; however, he does not meet the MLS requirements to sign a Home Grown contract with any of them, so he should be eligible for the draft when he decides to exit college.

One of the other questions is where will he play at the next level. He has trained with Chivas USA’s first team at center back, but he has made his butter in college at forward.

In a sense, he is a bit like former Duke standout and current Montreal Impact player Andrew Wenger. Zavaleta is a more refined player in terms of soccer smarts, but the dilemma facing where is his best position is similar.

Andre Blake, Connecticut: A phenomenal athlete and hands down the best goalkeeper in the nation (from a shot-stopping perspective), Blake is one of the most promising netminders to date in the college game. He’s far from a lock to go, as pro scouts certainly won’t like a few things about his game -- he can be a bit immature, and his distribution is spotty with his feet. The shortcomings certainly can be refined of course, and it’s hard to look past his raw ability.

Fifi Baiden, UC Santa Barbara: The defensive midfielder for the Gauchos is not the player that will attract interest with his mind-boggling stats or his mesmerizing goals. He is the type of player that does everything else.

He wins tackles in the midfielder of the field, he facilitates the offense with his distribution, and he is durable enough to withstand the constant physical toll of college soccer.

The Ghanaian is an immediate impact player if he decides to make the jump to the professional game.

Alex Martinez, NC State: The younger brother of Real Salt Lake’s Enzo Martinez only needed one game in the Atlantic Coast Conference to prove he was a Generation adidas target. 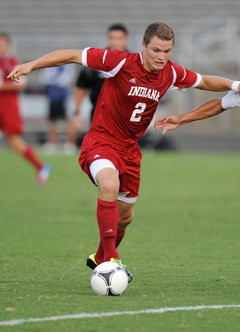 Against Maryland, Martinez made life miserable for outside backs with his deft skill and unrelenting engine. He did this against two MLS-level outside backs.

The hesitation on Martinez comes from the lack of a resume. He burst onto the national scene this season with NC State after two years with High Point.

Patrick Mullins, Maryland: Any player who features prominently for a program of the caliber of the Terrapins is often linked with a pro move, and Mullins is certainly talented enough to make it at the next level. He leads the Terps in both offensive categories (7 goals, 6 assists) and is starting to show real consistency.

If the Terps go on a deep run to either a College Cup or ACC Championship, expect Mullins to be strongly considered for a GA deal. He’s also likely to be the subject of a Home Grown disput as well, as he played for Fire Juniors, an affiliate of the Chicago Fire -- although it’s unclear whether he meets the requirements set for by the league to qualify.

Khiry Shelton, Oregon State: The agents turned up when Khiry Shelton was in Los Angeles next week. The Oregon State forward has drawn the eye of a number of talent evaluators thanks to his dynamic ability on the field.

Shelton is a prospect who could develop into a key contributor for an MLS club. He is physically powerful and difficult to dispossess. Those attributes translate well to the MLS level. He also is a smart player who sees the game well and makes decisive runs at the defense.

The criticism will come at his unselfishness. He seems to almost defer at times to his teammates at Oregon State when he could go to goal on his own. The previous injuries will also be an issue with Shelton missing time during his three collegiate seasons.

Eric Miller, Creighton: The struggles for the Bluejays this season could impact Miller’s draft spot. There’s no questioning his ability though, as he’s been a regular with the U20 MNT in previous camps. However, if he’s not able to catch the eyes of scouts due to his team’s poor performance, Miller is certain to stay in school.

Alfred Koroma, Akron: Koroma’s pedigree is what has him in this conversation as opposed to his performances in an Akron uniform. He’s only scored two goals so far, this year in eight games, struggling with injuries and a few other things.

With Caleb Porter’s departure already scheduled, however, if Koroma catches fire at the end of the season he’d possibly attract the appropriate parties to his signature -- but it’s pretty long odds right now.

Seth Casiple, California: An outside midfielder who is a set-piece specialist is not as easy to find as it sounds. Casiple probably propped up on many MLS teams’ radars after his appearances with the U.S. U20 Men’s National Team, but he has shown consistently with Cal that those appearances were no fluke.

The Golden Bears leading contributor, six assists in 11 games, looks ready for MLS competition. However, there are worse places in this country to develop than Berkeley. Cal head coach Kevin Grimes has a reputation for developing players as well as winning teams, so it would likely take a considerable offer to get him into the discussion for the 2013 draft.

Steve Neumann, Georgetown: His numbers may not be gaudy for the Hoyas so far (3 goals, 7 assists) especially compared to last year, but there’s no questioning Neumann’s ability to find space in defenses, spot an open man in front of goal, and do the little things to help jump start the attack.

Scouts will probably be concerned about his lack of physical presence, and his pace and athleticism won’t blow anybody away. That shouldn’t keep teams away though, if they want a smart player who can make things happen offensively. Hard to know if Neumann would be lured away from his senior year as well.

Walker Zimmerman, Furman: Another member of the U.S. U20 MNT pool who is likely in line to make the jump to the professional level this offseason. Zimmerman is a hard-working defender who has a knack for scoring goals off of set pieces. He has the physical prowess to play in MLS, and athletic enough to make the transition smoothly.