Here’s a look at the senior MLS prospects who did themselves a favor in the opening week of the NCAA Tournament – and who didn’t:

MF Jack McVey, Fairleigh Dickinson: McVey was the key for FDU in its upset of Saint Louis on Sunday. The senior notched the game-winner in overtime, but he also disrupted the SLU attack much of the day as well as spring the attack for the Knights. 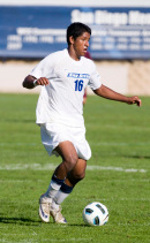 The midfielder definitely played his way into an MLS combine invite with the performance. If he can put together a similar showing against guaranteed top five pick Mikey Lopez on Sunday, then his draft stock will really skyrocket.

D/MF Greg Cochrane, Louisville: The Cardinals continue to prove that they are an MLS production line, and any left sided player is going to be coveted. Cochrane, who started this season as a left back before moving into a left midfield role, continues to show a nose for goal and the ability to setup teammates, scoring a goal and an assist in a big 5-0 win over Winthrop.

MF Dan Delgado, San Diego: Did we all write off San Diego and its roster full of seniors too early? Perhaps. There is a lot of talent on the field with Delgado pulling the strings, and he showed on Sunday that if you give him time and space, he would pick apart any defense in the nation.

Can Delgado do it again when Tulsa will be focused on stopping him?

D Tommy Muller, Georgetown: A senior center back who is probably one of the best in the class, Muller’s knock on him is his size, standing at 5-foot-11. In the Hoyas’ 1-0 win against Charlotte, Muller was a beast, however, winning almost every header and showing the instincts that certainly will see him drafted in January.

MF Leston Paul, South Florida: Paul was invisible for large stretches of the game against Tulsa in the South Florida. It was a game that was there for the taking, but Paul just did not put together the vintage performance that would have sealed the deal for the Bulls to advance to the Sweet Sixteen.

F Will Bates, Virginia: By putting his young Virginia teammates on his back and going on a nice tournament run, Bates could have made some noise and pushed higher up the draft ladder.

And while he won’t have hurt his case significantly – Virginia were in the mix until the end in their loss to a very good New Mexico side, Bates did show a streak of petulance when he shoved over an opponent in Sunday’s loss, not exactly what scouts want to see.

MF/D Jack Bennett, St. John’s(m): The early exit for St. John’s from the NCAA Tournament was not Bennett’s fault, but it will not help his draft stock to be sitting without games to play for the next six weeks or so.

F Chris Thomas, Elon: Coming from a smaller program like Elon, Thomas needs to use every chance that he can get to impress scouts, so his team losing in the first round isn’t going to help, as he won’t get a chance to add to his body of work anymore.