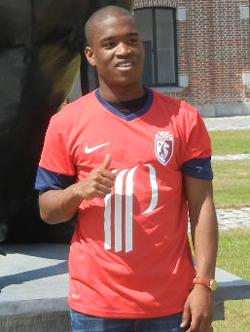 Maki Tall signed his first professional contract last week with Lille OSC. The 18-year-old forward, who was born in Washington D.C., turned down offers from some English Premier League clubs to remain in France.

Tall, who was profiled on TopDrawerSoccer.com last year, has appeared with the France U18 Men’s National Team in 2013. The teenager has been called into at least two U.S. camps but declined the invitations, as he wishes to remain loyal to France, which first called him in.

Tall previously played for Le Mans FC where he was the leading scorer of the club’s U19 squad. His contract expired in the offseason, which opened up interest from a number of clubs. Lille and OGC Nice emerged as the frontrunners for his signature with Tall ultimately selecting the Mastiffs.

The U.S.-born attacker looks to have a promising career at the club level, but there is no reason to believe his opportunity to wear the Stars and Stripes has disappeared. Tall has said that he wants to remain with France for now, but if the situation changes, U.S. remains a possibility.

Among the growing list of collegiate players to spend part of the summer in Europe, Old Dominion junior Skylar Hagan recently wrapped up a training stint with Croatian club Dinamo Zagreb.

Hagan has appeared in 33 games during his two seasons with the Monarchs. The Texas native started 26 of those games and registered one goal and one assist.

Hagan was with Dinamo for 12 days starting on July 17 and wrapping up on July 29. The 21-year-old has previous experience in Europe as he spent a year training with SC Cambuur in the Netherlands, which was set up by International Pro Management (IPM).

Hagan also played for FC Dallas during his youth career.

The Monarchs kick off the 2013 season with an exhibition against Georgetown on August 18.

Cody Sundquist, a U.S. U14 Boys National Team member and alum of the id2 program, is currently playing with Liverpool at the Milk Cup in Northern Ireland.

Liverpool opened the tournament with a 2-0 win over Co. Tyrone. The Reds played to a 1-1 draw against Cavan Monaghan DL in the second game. They wrap up pool play on Wednesday with a game against Southampton.

Sundquist is not an official member of the club yet, but he has trained with Liverpool extensively for the past year. He also spent some time training with ACF Fiorentina.

The Northern California defender has taken over the starting right back spot with the youth national team after missing out on a couple of the early camps with this cycle. Sundquist figures to be part of the roster when Hugo Perez calls the team into its next camp at the StubHub Center in early August.