Queens Prepares for Division I Switch 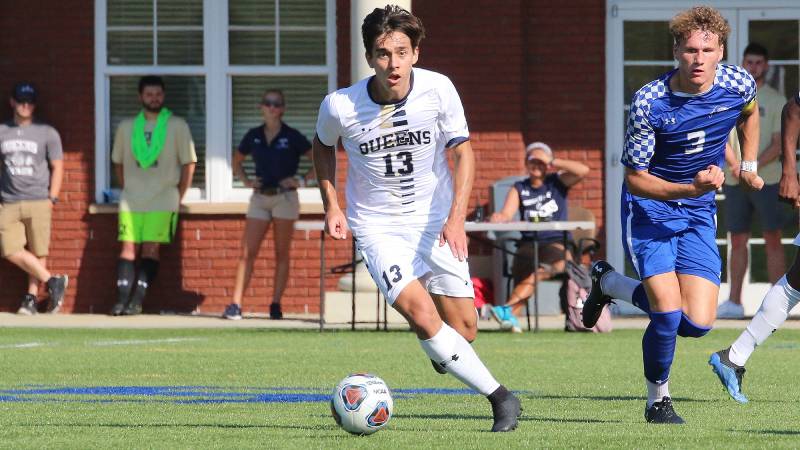 For Queens University of Charlotte, the chance of a drastic switch had loomed for a while. It started with rumors and whispers, as the college flirted with the idea of an ascendence from Division II to Division I athletics. Then, interest became public, with university officials launching inquiries into how a jump in division might impact the institution.

Head men’s soccer coach Oliver Carias kept instructing through it all, aware that a major change could materialize. Then, in May, an official announcement: the school was steadily transferring its sports into Division I play — with his team among the first to take the leap.

And as Queens men’s soccer approaches its first season at the zenith of college athletics, it feels prepared. There’s a base knowledge, a quiet confidence and, ultimately, an optimism for the years to come.

“We are very excited, but, most importantly, confident,” Carias said “We'll go one game at a time, but we feel very good about what we have.”

Queens college seems an unlikely candidate for DI soccer. It will become the second smallest school in NCAA Division I sports by enrollment. It will also compete with some powerhouses: UNC and Wake Forest all have massive recruiting pulls in the area. There are other concerns, too: long distance travel, a relatively small squad and the fact that Carias has never coached at the DI level in any capacity. Queens is also a college with limited success. The men’s team has never won a DII national championship and hasn’t advanced past the last 16 of the NCAA Tournament since 2006. That they will play some NCAA Tournament caliber opponents in a tricky ASUN slate is of little comfort.

But preparations are well underway — they have been for quite some time. Carias — who played for Queens and enters his 11th year as head coach — insists that this is a natural landing spot for his squad, the next step that his team and the university are both ready for. Reasons for optimism run rife. Though the team has never matched up against a DI school in competitive play, Carias regularly organizes friendlies against schools of that standing. Those games have proved that his roster has the requisite quality to play such teams.

They certainly showed as much last spring. Though a Division I change wasn’t official at the time, both he and the team had been informed it was a real possibility. So, the Royals played four matches against DI sides in anticipation of the switch. They won two and lost two. Both defeats came by a one goal margin — with Queens playing a man down in one of them. And the fixtures proved that the team was ready, Carias said.

“It felt like we have the type of player to be successful at a Division I level,” Carias said.

Those games — results encouraging as they were — highlighted some key issues within the team. Although the Royals had the quality to compete, they occasionally failed to match the fitness and intensity of their opponents. The solution, then, is to demand more on the training pitch. The coaching staff has been reluctant to introduce new drills or change play style, but the speed has increased. Every pass is struck more thoroughly, every tackle that little bit harder.

“The whole intensity of the practice has grown from the warm up to the passing drills, possession, and finishing drills,” midfielder Yuri Paplowksi said.

Elsewhere, Carias has to approach recruiting differently. He brought in four newcomers this spring, informing them that they might be playing DI soccer in August. Once the announcement was made official, he dipped back into the talent pool, picking up two more recruits to flesh out the roster.

Division II recruiting can differ from higher levels, Carias said. A lot of incoming freshmen tend to wait before making a decision, perhaps hoping that a Division I opportunity might fall their way, before opting for a lower level. Going forward, though, things might look different. Carias will have a bigger player pool to choose from, and he will likely attract more interest from younger talents. The emails have already come in from 2023 and 2024 graduates — typically far earlier than he might usually receive.

How exactly Queens might compete with North Carolina powerhouses remains to be seen. The pull of Charlotte could be crucial. It’s a city with a strong soccer pedigree, dating back to the early 1980s, when the Carolina Lightnin’ touched 20,000 fans in the American Soccer League. MLS expansion franchise Charlotte FC has tapped into that enthusiasm, breaking the league attendance record in its 2022 opener.

“[Queens] is in the middle of everything. It's three miles from downtown where the MLS team plays,” Carias said.

Dickson Field has one set of bleachers, perched on a steep grass embankment. It’s a pleasant pitch, flanked by trees and planned out meticulously at the bottom of a hill. Despite the welcoming nature of the facilities, attendance has rarely pushed past 100 in regular season play.

That just might change in the weeks, months and years to come. There will undoubtedly be some growing pains for this squad. They might be on the wrong end of heavy defeats, or find themselves short handed due to the injuries that might pile up in an intense DI season.

But for Carias and his squad, the focus is long term. And in small glimpses, they’ve been there before. The friendlies, the quality in the team and the intense training sessions could make a difference. And for their first year on a bigger stage, those small victories alone might just be the start of grander wins to come.

“I wouldn't venture to say that we're gonna be top two, top three,” Carias said. “What I would say is that we're in a great position to be successful in the first year.”