TAMPA, Fla. – The W-League announced its Team of the Week, honoring Colorado Rapids Women midfielder Erin Gunther as Player of the Week after she led the Rapids to a 3-2 victory against their rival the Colorado Rush. 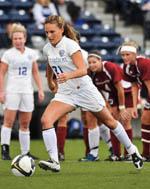 Gunther, a 2011 graduate of Creighton University and a three-year member of the Rapids, was a dominant force in the midfield in the back-and-forth match, playing a part in all three Rapids goals and scoring a highlight-reel goal of her own in the 3-2 victory. Gunther edged out New Jersey Wildcats forward Jessica Fuccello, who tallied two goals and an assist in a 4-2 win vs. North Jersey. Atlanta’s Rachel Garcia earned the other forward slot after her goal against VSI Tampa Bay.

Marissa Mykines of the Bay Area Breeze earned a midfield spot on the Team of the Week after scoring the historic first goal in team history as the Breeze defeated Santa Clarita 1-0 in their opener. Also in the midfield are VSI Tampa Bay’s Stacy Bishop, who scored a late equalizer at Atlanta, and Dayton’s Kelly DeNiro, who tallied the game-winner as the Dutch Lions knocked off Charlotte.

Carolina Elite’s Blakely Mattern leads the defense after scoring the game-winning goal against VSI Tampa Bay on Sunday, and she is joined by a trio that helped their teams to shutout victories – Laval’s Kathryn Acton, Ottawa’s Caylee Milne and Dayton’s Alexandra Warren.