Readjusting expectations for the U20 WNT CARSON, Calif. — It is fairly easy to spot the changing of the guard in athletic events.

When one dynasty ends and another begins, there is no ceremony or ritual – just the acknowledgement that one team is now superior.

If anyone needs clear indication that Japan has taken a leg up on the U.S. Women’s National Team program, Saturday’s international friendly between the two nations at the U20 level was a pretty obvious example.

Japan won the game 3-0, which came on the heels of a 3-2 victory on Thursday between the same sides. Japan also beat the U.S. at the U17 level earlier this year by a 4-1 score line. 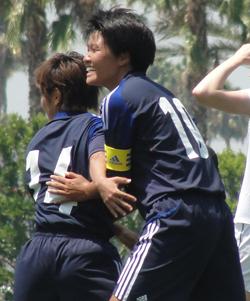 On Saturday, Japan held the advantage in possession, which is not entirely surprising as the U.S. style is dictated more on a pressure and dominance through athletic merit and grit. Japan’s real showcase was the ability to transition from attack to defense and thwart nearly every attempt that the U.S. had moving forward even when Japan coughed up the ball, which was rare on the day.

The U20 WNT finished the game with three shots on goal – two of them from Summer Green midway through the second half – and never really troubled the visitors into believing they were on the ropes. This is a far cry from the dominance of the U.S. Women’s National Team program of yesteryear, which routinely went into every competition as the favorite to win the event.

Japan, France, and others have advanced the women’s game to the point that the U.S. is playing catch-up.

U20 WNT head coach Michelle French said that some of the focus moving forward will be on improving the defensive shape and ability to deal with off-the-ball movement. When asked if this game pushed her to consider other candidates for spots on the field, she said it is still an open competition for spots on the team.

“I’ve been excited about the college season since I took this job,” French said in regards to monitoring college soccer from a breakout freshman. “There is going to be a lot of untapped talent that is going to come out of the college season. And there are roster spots [open] for this team. That is what I think is so excited about the upcoming season – we have a great core, but I think there are still a few players out there who could impact this team.”

The next time coach French will see this group will be in November when they hold a camp for the players not in the NCAA Tournament. A lot can change over the course of three months, and if this set of games was any indication, a lot needs to change for the U.S. to defend the title in 2014 at the U20 World Cup.