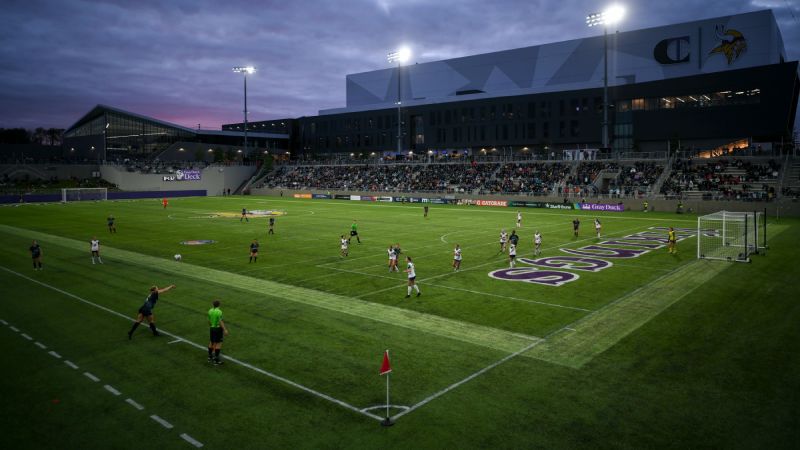 There was a buzz inside the TCO Stadium. The Minnesota Vikings-owned facility, usually capable of fitting around 6,000 people, had crammed 6,500 fans in for the USL W League final between Minnesota and South Georgia Tormenta FC.

At kickoff, the crowd roared. The chants rang around the stadium, songs for individual players, banging drums and the occasional chide or criticism of refereeing.

The quality of the match befitted the atmosphere. Tormenta FC took an early lead, before Minnesota equalized through a 30-yard strike. It was all resolved deep into extra time, with Tormenta’s Jaida Nyby finding the winner, mere minutes after her goalie had saved a penalty.

“It had all the emotion, all the stress, all the energy that a game like that deserves, in a venue like that with crowd support like that,” Tormenta FC coach Jim Robbins said.

Tormenta’s win concluded the inaugural season of the USL W League on a high note. After 254 games across seven divisions, with attendance often reaching the level of the fully professional NWSL, the league showed that there’s a niche for women’s pre-professional soccer. And league officials think it’s merely the beginning.

The USL W League was conceived as a way to centralize the women’s game during the summer. It’s the offseason for college players and most top high school prospects’ club seasons are also winding down. For roughly six weeks, an opportunity for other organized soccer emerges.

“You've got fall and spring ball collegiately and in the summer, a lot of these players come back home,” W League President Amanda Vandervort said.

There have been various experiments in the space before — including a previous edition of the W-League operated by USL — and other summer leagues are in operation. But the USL wanted to put together a lasting system. For that, it fleshed out women’s summer soccer into something far bigger. It targeted markets that could embrace pre-professional women’s soccer, formulated divisions to cut travel time, created desirable merch and ensured that the infrastructure was in place. That meant striking kits, accessible stadiums, and, most importantly, a high quality product.

League participants varied in age. The majority were college players or recent graduates, playing summer ball near their hometown. But there were also some vets of the women’s pro game, with a select few high schoolers mixed in. The result was a competitive league, one that drew the best of youth and college talent in the country.

“I think it's very encouraging to see the level of play being that high with players of a very young age,” Robbins said.

The 44 franchises had little time to set up their rosters. Though each club approached recruitment differently, most relied on a network of college coaches and club officials in their local area. Their selling point was relatively simple: the opportunity to play a good standard of soccer, with a chance to get noticed and move into the pro game long term. Such a technique pitted players of rival schools against each other, while also drawing in participants from faraway conferences, cultivating experiences and matchups that would otherwise be unlikely.

In that space, players outside of the elite college sphere were given chances to state their claims on a national level. Golden Boot winner Amy Andrews was one such talent. The forward — originally from central England who plays her college ball at relatively unheralded Western Illinois — bagged 19 goals while taking on some of the best defenders the country has to offer.

“It's probably the hardest soccer I've played in. That's why I was even more grateful to get the awards I got because I wanted to test myself to see if I'm good enough,” Andrews said.

And as the quality became clearer, support grew. Such was the case for the Aurora. The club — based just outside of Minneapolis — tapped into the local community’s passion for soccer. It became, effectively, a fan-owned operation, not unlike the traditional European model. Over 3,080 investors chipped in and the supporters came in droves every week.

On match week one, thousands of fans showed up. Within three weeks, the players had to be escorted off the pitch because so many local community members asked for autographs and pictures.

“On the coaching side, I have never experienced anything like that before, it was really, really special to witness our fan base fall in love with our team,” Aurora coach Nicole Lukic said.

Fan allegiance in Minnesota was so intense that Robbins wanted to play the final on away turf, he said. His players were running through the permutations, figuring out how a home matchup might be possible. But the opportunity to play in front of 6,000 fans — regardless of location — was too much of an appeal to turn down.

It’s finals like that — extra-time thrillers before thousands of fans — that the league wants to build off. Expansion, Vandervort said, is crucial. There are further teams to be announced, more markets to tap into.

But the USL wants more, too. In September 2021, the league office announced the Super League, a professional competition due to play out from August-June, running concurrently with the women’s international calendar. The idea is to create a year-round women’s soccer calendar, one in which college and high school players can be fast-tracked to the pros, while also gaining experience in lower divisions. It’s a crucial development for a girls' soccer community that once offered few options outside of Women’s National Team appearances.

“You'll see us evolving that full youth to pro pathway in the near future,” Vandervort said. “So young girls who are playing can see that actual path to becoming pro.”

Vandervort wasn't surprised by the fan support throughout the season. The USL had set up the league as an outlet for fandom, a way to give women’s soccer fans around the country a team to get behind. What did surprise the commissioner, though, was how many participants thanked her.

It happened all the time: at games, at events, even through coaches. The player pool was grateful for the opportunity to continue to compete in an elite environment. And if all goes to plan, those chances, those experiences, could extend well into the future.

“The fans want it, the players want it. And the owners are invested and excited about building, not just the W League and its inaugural season, but also the future of women's soccer in this country,” Vandervort said.