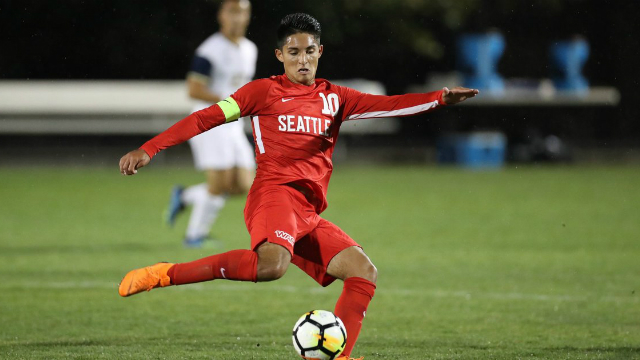 “I’m just a kid, trying to live their dream.”

The words of Seattle University midfielder Sergio Rivas come into focus on Friday, as the product of Albuquerque, New Mexico prepares to learn his fate in the 2019 MLS Draft.

His path to this point is one that is becoming far less common in today’s U.S. Soccer landscape. Rivas, a star over the past four seasons at the WAC program, didn’t compete in the Development Academy. He was a high school standout at Cibola High School, playing club soccer with the New Mexico Rush. As a senior in high school in 2014, he was named Gatorade Player of the Year in New Mexico.

A glittering college career netted him an invite to the 2019 MLS Combine, and he hopes to hear his name called in the MLS draft on Friday.

There are times that Rivas – while confident about his abilities on the field – can scarcely believe he is on the cusp of professional soccer.

“Leaving Albuquerque to become the person I am now and not just that but excel in soccer – I never played DA, didn’t play for UCLA,” Rivas told topdrawersoccer.com. “I played for very underrated teams, to get to the place where I am now, I think I deserve it, but it kind of shocks me how far I’ve come.”

A 5-foot-11 attacking midfielder with a lean 170-pound frame, Rivas thrives with the ball at his feet. Capable of playing in central midfield, he’s been a mainstay for the men’s soccer program since he first stepped on campus in the fall of 2015. Not only is he talented, Rivas carries himself with a chip on his shoulder and is a fierce competitor that loves to win.

His competitive edge dates back to his club days. After picking up soccer at the age of 7, Rivas became more and more serious about the game as he grew older. When he made a Region IV ODP team because a couple of other players couldn’t go, it developed into a motivating factor.

“From there I started to say ‘next time, I’m going to be the best one on the ODP team,’” Rivas said. “That translated to all my games: [New Mexico] Rush, high school. Before I went to Seattle, my dad and I talked a lot. I told him ‘Dad, look. Don’t worry about anything. In two sessions I’m going to show what I have and I’m not going to miss a game. I promise you that.’ That same mentality, that’s exactly what happened.”

A trip to Spain during his club years added inspiration. When he was a high school sophomore in 2013, Rivas was one of two Rush players from around the country invited to train at the Real Madrid Select Training Program with 36 other players from the U.S. His drive and desire took flight during that trip, as he saw a completely different level of soccer.

Being part of the ODP program helped open the door for Rivas to play at Seattle University. Going through the recruiting process, reaching out to coaches, he needed the right team and offer to come his way. It took a chance experience with an older ODP side that would crack the door open for him at the WAC program.

“[Seattle Head] Coach Peter Fewing saw me play in Regionals in Albuquerque because we had Regionals [there],” Rivas explained. “My team didn’t make it. But my coach wanted me to play with the U19s and I was 15. I played in the Regional Finals as a 15-year-old with the U19s and that’s how they became interested.”

Once Rivas had the chance to see the campus and get a taste of the Pacific Northwest, he was sold. It didn’t hurt that the region has a thriving soccer culture, between being home of the Sounders and the proximity of the Vancouver Whitecaps and Portland Timbers.

After having that conversation with his dad, Rivas went out up to the Pacific Northwest and proved it. A couple of days into preseason, with the team going through 11-v-11 drills that featured returning starters against the reserves, he moved into the first team. He was named the WAC Freshman of the Year in 2015, playing in 23 games, scoring three goals and adding five assists.

“The biggest reason why I was successful as a freshman, is that I didn’t think about it,” Rivas said. “I didn’t think about how big the players were, what team we were playing, I just went out there and played. I’m always been a very fit player, and I was everywhere. I’m a very versatile player, I can dribble, pass, shoot. So when I was a freshman – I was 135 pounds back then – they couldn’t keep up with me because I was playing the ball too fast, dribbling too fast. There were times when hard tackles would come in, but I would do a good job of riding the tackle well.”

Rivas showed that he was far from a one-season wonder, earning either All-WAC First or Second Team honors all four seasons. As a senior last fall, the attacking midfielder finished fourth in the nation with 11 assists.

His four-year career earned him an invitation to last week’s MLS Combine, where he scored a goal in the opening day, and was happy with his performance.

“I think I did pretty well, I could have definitely done a little bit better, but given the circumstances that you are in, playing with new players, my last game with Seattle University was back in November,” he said.

While Rivas sat out the second game of the combine nursing an injury, he remains a top prospect and potential first round pick on Friday. He won’t be able to attend the draft, but no matter how things turn out, his dream is almost within reach.