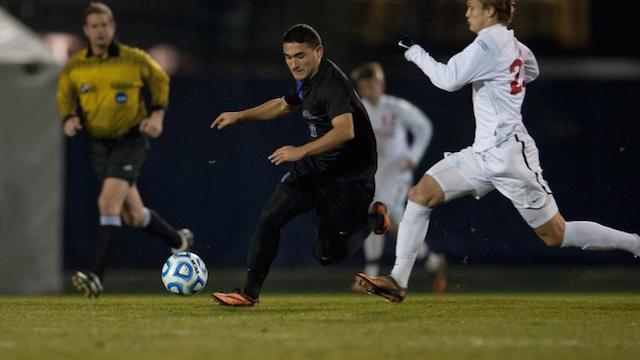 Cristian Roldan waited eagerly for years for his first youth national team call-up. Earlier this year, it finally came. Fresh off the biggest season of his life, Roldan was easing into the offseason in early January when he got the news. He’d been selected for a U20 Men’s National Team camp roster. A tangible reward for a red-hot freshman season with Washington.

During camp, a second domino fell, this one even bigger than the first. MLS had come through with a Generation adidas contract offer. Professional soccer waited on the other side of his decision. After years of skimming under the radar, far from the discerning eye of the national focus, everything seemed to be flying at Roldan at once. And he had to choose fast.

“I was at national camp, so it was very hard to communicate with my family or my friends or my coach,” Roldan said. “But I think it was a pretty easy decision.”

Roldan, of course, opted to decline MLS’ offer for a guaranteed contract and stay at Washington for at least another season. After conferring with his family, Huskies coach Jamie Clark and mulling his options, the allure of coming back to a national title contender outweighed his readiness to plunge into MLS. Next year? Maybe. But not yet. And the decision wasn’t a particularly difficult one to make.

“I don’t think I was anywhere near close to signing,” Roldan said. “I just wanted to know if I had an option or not, and how much (the contract was worth), as selfish as that sounds. You’ve got to look out for your own self as well. I just wanted to know if my name was out there, and it was. I’m grateful for that contract offer and hope for many more to come.”

The last 16 months have been wild for one of the nation’s most abrupt rags-to-riches soccer stories. Roldan was a virtual unknown into his junior year in high school, and Clark happened to stumble into one of his club games at the Surf College Cup in San Diego in 2012. He’d never heard of Roldan, which precipitated one of the most fortuitous finds in recent college soccer recruiting history. When Clark asked a local Saint Mary’s coach about his new discovery, he’d never heard of Roldan either.

A year later, Alexi Lalas strode into Roldan’s classroom at El Rancho High School to surprise him with the Gatorade High School National Player of the Year trophy. By then he was a known quantity despite never playing in the Development Academy, but it was too late. He was already a Husky. Clark had beaten the nation to the punch.

Roldan’s first season at Washington wasn’t without its growing pains, but even to the untrained eye he was a cut above. He started all of Washington’s games and contributed to the program’s first Pac-12 title, its 17-2-4 record and No. 2 overall seed in the NCAA tournament. The 5-foot-8 playmaker scored seven goals and contributed five assists, and he was an easy choice as the league’s freshman of the year.

In order to ease Roldan into the college game, Clark started him out wide for the first 11 games of the season. The idea was to maximize his ability in one-on-one battles and not bury him in an avalanche of responsibility out of the gate. On Oct. 14, against Oregon State, Clark moved Roldan into his more natural role as a centrally located creative attacking midfielder. While he’s retained a measure of freedom to move where the game dictates, he’s been in that spot ever since.

“Last year, we were a pretty direct team,” Clark said. “We lived off second balls a lot, and (Roldan) never complained once about it, did it and showed his magic competing for it. He knew that’s not our long term goals, but it’d be easy to come in and selfishly worry about your own game. Instead he was willing to embrace how this team was going to be successful.”

While Roldan’s club status skyrockets, he hopes his dormant national team prospects follow the same track. Despite his January call-up to U20 camp, he hasn’t been called back by coach Tab Ramos in either of the last two camps this year, and he wasn’t included in the team for the Dallas Cup in April. Roldan admits to being disappointed at how his past with the youth national team setup has unfolded, but he has one tangible example to follow.

“Just like DeAndre Yedlin, he was supposedly out of shape when he went to his first camp,” Roldan said. “They saw he was doing well and they called him up. Maybe if I have a good season I’ll get called up again. But I don’t think it’s the biggest deal in the world. I don’t want to be disappointed, and it just makes me want to work harder.”

Roldan’s mother is Salvadorian and his father is from Guatemala, but he doesn’t have a passport from either nation and hasn’t been contacted by their respective federations. While he said he’d be “interested” if either got in touch, his desire is to play for the U.S. national team.

For Clark, who’s seen Roldan rocket from local to regional to national status, his arrival is merely a matter of time.

“It speaks volumes to Cristian in terms of his decision to leave Southern California,” Clark said. “Granted, this is a great option, but he could’ve chose to be closer to home, closer to comfort, but he chose in theory the most challenging place to come to. That speaks volumes to what he’s going to do.”