Romagnolo eager to make her mark on Irish Two weeks into her new job as the head coach of Notre Dame women's soccer program, Theresa Romagnolo has done her best to hit the ground running.

While a long road lies ahead towards the start of the 2014 fall season, the new head coach is hopeful to instill in her program what she sees as the key to continuing what has been a traditionally successful program. 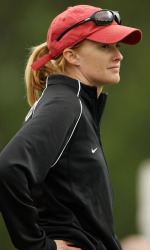 “In a short time I’ve been here we’ve already talked a lot about being a team that’s going to put teams under pressure,” she told TopDrawerSoccer.com. “We need to have all ten field players working together as a unit to win the ball back, so we can press teams and go to goal in transition, and look to possess in the attack. I want to bring a real blue collar attitude to the field, with our talent. I think that’s what is going to take us to the next level.”

Introduced as Randy Waldrum’s replacement on March 19, Romagnolo takes over the ACC side after three seasons as head coach at Dartmouth, where she posted a record of 25-22-3. Prior to that, she held assistant roles at Stanford(w) and San Diego.

As she surveys a very talented roster – Notre Dame has seven starters and 23 players returning next fall, along with the addition of the No. 3 ranked 2014 recruiting class – Romagnolo plans to build on what made so many of Waldrum’s sides successful.

With the combination of history, athletic department resources and quality of education on offer, there’s no question that Notre Dame is one of the most coveted roles in Division I women’s soccer. Romagnolo said she was “pleasantly surprised” when she first got the call about the position, and is now eager and excited for the immense challenge that lies ahead.

“I’d say it’s a dream job," she said. "I think there’s a lot of talent here already so they are already to be in a position to get to the College Cup, and then the other exciting thing for me is the academic side, working with the elite student athlete, which I really enjoy. For me, it’s a place that is already poised to be successful and can continue to be in successful because of everything it has to offer.”

Plans for the spring include getting to better know the current players on a roster that includes stars like Cari Roccaro, Morgan Andrews, Katie Naughton and Sammy Scofield. The plan also includes building relationships with the incoming 2014 class and identifying the best styles for the team to play during the spring and going forward.

Looking ahead to the fall, Romagnolo is eager for the new conference challenge, as she jumps from the ACC after stints in the Pac-12, WCC and Ivy League.

“I enjoy playing against the best teams in the country and right now you could argue that the ACC is one of the most competitive conferences in the country,” she said. “The fact that every game is going to be competitive, it’s like playing an NCAA game – you can’t take a game off, you have to make sure you’re preparing and making sure people aren’t over training over the course of the week. Just managing all of that. For me it’s exciting because that’s how you really prepare to do well in the NCAA tournament and you push yourself week in and week out to get better.”

It’s clear that competing at such a high level is part of Romagnolo’s DNA, as she hopes to instill and foster a competitive environment in training that will spill out into games.

“I think at the end of the day when you’re dealing with athletes, they like to be pushed hard, they love the competition of the matches, so trying to recreate that type of practice environment and getting to enjoy being under that type of pressure situation in practice,” she said.