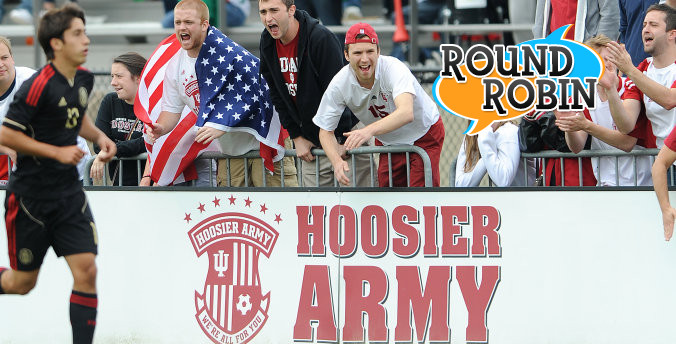 With more than 50 Division One conferences in college soccer between the men and women, there are bound to be many exciting title chases in the cards. Our Round robin question for today is: Which college conference race are you anticipating most as the season approaches?

Robert Ziegler: After writing the SEC women’s preview I can see a lot of intrigue here. South Carolina lost their all-everything player Kayla Grimsley, but you don’t get the idea Shelley Smith’s Gamecocks are planning to shrink back into the woodwork. Florida has a lot of talent and is extra motivated after falling a bit short lsat season. Tennessee, Georgia and Kentucky will also be making noise in the East. IN the West,Texas A&M will be the favorite as the newcomers. G Guerrieri’s squad is loaded for bear and is great fun to watch (if you like goals, that is). You know that LSU, Alabama and Auburn are not about to sit back and watch the new kids on the block come in and take over without a fight.

On the men’s side, I have to stay local and go with the Big 10. This conference is deeper than it is wide and it seems like most years any team can come out on top. I’m looking forward to having a front row seat.

Caroline Yort: On the men's side, I want to see what Stanford has to offer under new head coach Jeremy Gunn, so I'll be tracking the Pac-12 for sure.  We'll see if Coach Gunn can get Stanford back on track for an NCAA bid.  Also in the Pac-12 is UCLA, who has a star-studded freshman class, even without Marc Pelosi and Mario Rodriguez, who have both chosen to go the professional route.  The Bruins will have Holden Fender, Cole Nagy, and Javan Torre, all with US National Team experience, and it will be interesting to see who makes the lineup.

On the girls side, the Tar Heels are always a favorite, so I'll be watching the ACC.  More than a couple of ACC players will miss a chunk of the season due to U17 and U20 World Cup participation (Mollie Pathman of Duke and Morgan Brian of Virginia, among others), so the regular season matchups could be interesting. UNC freshman Summer Green will also miss some games for the U17 Women's World Cup, but we'll see if she can continue her goal-scoring ways in the college game.

Travis Clark: The Big East women's race is sure to be a good one. There are a lot of big programs coming off of interesting seasons a year ago, as Notre Dame was a bit down, while Marquette and Louisville did well. Then of course, one of the best team's has bolted in West Virginia, and Georgetown has lost one of the best players in the nation in Ingrid Wells. Add in the fact that a few of the best players will be missing early on because of the U20 World Cup, and there are a plethora of story lines to track down.

On the men's side of things, I can't look past the ACC. North Carolina was so dominant in the postseason, lost some of their weapons but have cooly reloaded with a stellar class, including U20 midfielder Danny Garcia. Then, Wake Forest is a program on its way back to the top, while Maryland and Duke are holding steady, to go with a couple of dark horse teams like North Carolina State and Clemson. It should be the race to watch in the country.

J.R. Eskilson: Is anyone even going to challenge Indiana in the Big 10 this year? I thought they already gave the Hoosiers the league and tournament crown for 2012 (Sorry Wisconsin fans and Northwestern fans). I am more interested in the race out west in the often overlooked (and probably soon to be extinct) MPSF. Yes, it is a conference of 2.5 teams, but it is going to be a fun year in the MPSF before the jailbreak in 2013. This is the last year that CSU Bakersfield, New Mexico, and a few other teams will play each other. Last year, the Roadrunners and Lobos engaged in a couple of spirited battles. Off the field, the coaches say it was just competition and there is no hatred brewing, but these programs genuinely don't like each other. Both coaches are gnawing at the bit to win the league crown in 2012, which makes this fall so fascinating. Not to mention the level of MLS talent in the conference. Cal State Bakersfield is led by MAC Hermann Trophy favorite, Gyasi Zardes, who will likely sign the biggest Home Grown contract in MLS history after this season. New Mexico claims one of the top center backs in the nation (and a future first round pick) in Kyle Venter.

On the women's side, I'm going to pass over the local conferences. and go with the Big 12. Mostly, I am curious about the new coaches in the conference: Matt Potter (Oklahoma), Angela Kelley (Texas), and Eric Bell (TCU). I watched Potter's Washington State program a few times in the past, and I am interested to see how quickly he can make that program competitive. Plus adding West Virginia to the conference should be another interesting twist for this fall in the Big 12.

Robert Ziegler’s Final Word: Yes J.R., there will be a strong title challenge in the Big 10. Never underestimate Tim Lenahan and the Wildcats, among others. Also, Caroline humbly omits the fact that her son Bennett will be debuting with Furman this season, making her an avid follower of the Southern Conference this year. Really, you can’t go wrong, whatever college conference you choose to follow (and it’s not like you’re limited to one).