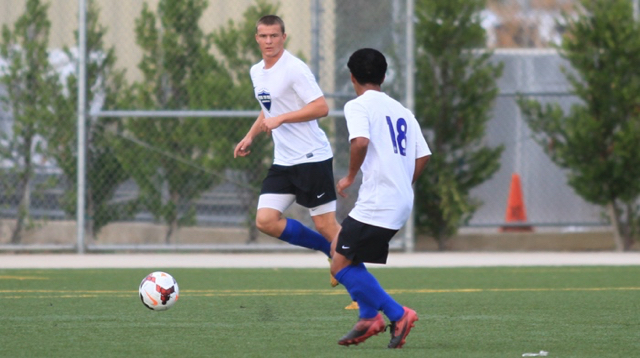 SANTA BARBARA, California - Could a chance meeting in an airport really shift the profile of a player?

For Sam Strong, seeing U.S. Men’s National Team head coach Jurgen Klinsmann in an airport in Germany was a pretty exciting event. Strong went up to the head honcho of U.S. Soccer coaching and chatted with him briefly. Klinsmann, kind as ever, asked what the teenager was doing in Germany.

Strong, fresh off an impressive performance with Eintract Frankfurt, told Klinsmann about his trip over and how he did with the club. A couple of weeks later, U.S. Soccer Scout Todd Saldana called the UC Santa Barbara coaching staff and enquired about Strong and his availability. USSF did the due diligence and checked out Strong in a spring game against San Jose State that weekend before inviting him into the U.S. U23 Men’s National Team camp. He was one of only two college players on the roster.

Of course, the serendipitous rendezvous with the most powerful figure in U.S. Soccer only played a small part in Strong’s eventual call-in to the national team, which marked his first camp. It also helped that Eintract Frankfurt’s coach is friends with U23 MNT head coach Andi Herzog and that Strong did well in Germany - even earning training time with the first team.

The dominoes fell at just the right moment for all of this to lead to Strong training with the U23 MNT last month in Los Angeles prior to the friendly against Mexico. He did not make his debut in that game, but he was still all smiles about the unexpected honor.

“It was cool. I was shocked to get called in,” Strong told TopDrawerSoccer. “It was a good experience because they are older and they are top level guys. It helped me get better.”

As for the meeting with Klinsmann, Strong said it was just a normal conversation.

Strong said that was his first time meeting Klinsmann. He had seen the coach at fields before and he has played against Klinsmann’s son, Jonathan, in the Development Academy. While the chance meeting is a nice story, Strong said he believes that the U.S. Soccer scouting network picked him up from his previous play with Real So Cal as well as his showing with Eintract Frankfurt.

“It was probably from the academy and when I went to Germany, which was great,” Strong said. “I got to train over there. I had a family friend who knew a guy in the club so I got to go over there for a week. I guess someone from [Eintract] Frankfurt mentioned me.”

Strong trained with the 19s and first team during his week with the club.

“Those guys are really good so I learned a lot, but it definitely made me believe that Americans can go over there and do alright,” Strong said.

In terms of feedback from the German club, it was pretty much the same stuff he’s heard from all of his coaches in the past.

As for whether he gets called into U23 MNT camp again, Strong is not quite sure but he is hopeful.

For now, Strong is at UC Santa Barbara and preparing for his freshman season this fall. He enrolled early so he could play in the spring and get acquainted with the team.

“I love it,” Strong said. “I’m from Santa Barbara. I love this city. Obviously, it’s a top program so it’s great playing with better guys. It’s definitely a higher level than the academy so I’m enjoying it so far.”

UCSB head coach Tim Vom Steeg is certainly enjoying the new additions to the team especially with two youth national team members in the fold. Along with Strong, Justin Vom Steeg has been a regular member of the YNT setup with his most recent appearances coming with the U18s.

“It’s a good opportunity for both these players,” Tim Vom Steeg said. “They go away and experience soccer at a really good level. They come back and hopefully that carries over to our field. Any chance a player gets to go off with the national team is a great opportunity.”

The connection between Justin Vom Steeg and Strong extends past that, as they have been playing with and against each other for most of the last decade.

“What’s unique about these two is they literally live two miles from each other and started playing AYSO all-star soccer against each other at nine or 10,” Tim Vom Steeg said about the two growing up in Santa Barbara as UCSB rose in prominence. “It has worked out well. They are both going to be freshman starters here. It’s been great to get them into a spring situation where they get some spring games and get used to the culture here. We project both of them as being key players for us.”

The spring season for the Gauchos wrapped up on Saturday. Next up for Strong is a trip just south for some games during the break.

“We will see what happens,” Strong said about his summer plans. “I’ll probably play with [Ventura County Fusion in] PDL.”

When he gets back on campus, Strong will be gearing up to face a foe he met at the U23 camp. The Gauchos home opener is against Jordan Morris and the Stanford Cardinal. The national team camp gave Strong a brief glimpse at the quality of Morris. Strong’s collegiate debut would be the perfect time to really show off for the national team coaches against the star pupil.